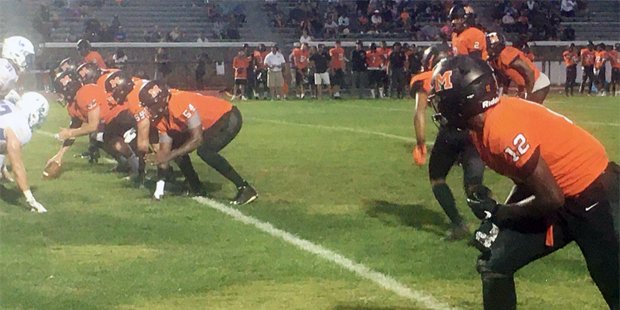 Martin throws for 3TDs and runs for another score as McDonogh gets first win of the season; St. Mary’s drops to 2-1

by Nelson Coffin
Things were looking a little bleak for the McDonogh football team after an 0-2 start, although both losses were to quality opponents.
After all, the Eagles led Gonzaga College, the top-ranked team in the D.C. Metro Area by the Washington Post, in its opener until the waning seconds of the third quarter before bowing, 23-7,.

McDonogh senior Preston Howard caught a 30-yard TD pass and ran for 29 yards from the Wildcat formation in the Eagles’ 41-6 triumph over St. Mary’s on Friday night.

McDonogh is still the only team to score against the Washington Catholic Athletic League power in three games this season.
The setback to No. 3 Calvert Hall College last week was a little more unexpected, yet the Cardinals are also undefeated after routing Riverdale Baptist, 42-0, on Thursday.
Still, the Eagles needed an ego boost when they hosted No. 14 St. Mary’s on Friday night at John McDonogh Stadium in Owings Mills.
And even though MIAA A Conference teams typically have an advantage when playing B Conference rivals, the thorough nature of McDonogh’s 41-6 triumph over the Saints had the home team feeling much better about itself.
“We got our quarterback (Kaden Martin) going,” McDonogh coach Hakeem Sule said. “All season we have talked about finishing, and tonight he was very efficient. He looked quick, confident and comfortable.”
Martin completed 13-of-18 passes for 178 yards and connected with three different targets — Maryland-bound senior Preston Howard, senior Malachi Jones and sophomore Santino Sanchez — for TDs through the air.
The senior signal-caller, a transfer from Knoxville Catholic in Tennessee, also had seven carries for 72 yards and a touchdown to pace the Eagles.
”And it started with our O-line,” Sule said, praising the effort of senior Kwan Williams, juniors Antonio Tripp, Tamarus Walker and Sean Stevenson and sophomore Justin Demario . “We got behind those bigs.”
McDonogh scored first, overcoming a tackle for a loss by St. Mary’s sophomore linebacker Bruce Dent and a sack by senior linebacker Matthew Romo to finish a 10-play, 54-yard drive that concluded with a 25-yard strike from Martin to Sanchez with 3:15 left in the opening period.
Martin’s 21-yard scramble was a key component to the sequence.
Senior linebacker Stefan Egbe, who also had a banner day running the ball, picked off a deflected pass by St. Mary’s senior quarterback Rocco Abdinoor at the Saints’ 43-yard line to start the next McDonogh progression.
Six plays later, Egbe was rewarded when he bullied his way into the end zone from a yard out to give the Eagles a 14-0 cushion early in the second quarter.
St. Mary’s started to make some noise when junior running back Wyatt Cotton rumbled for 20 yards and was tackled via a face mask to push the Saints into McDonogh territory for the first time.
A keeper by Abdinoor picked up another 31 yards, giving St. Mary’s a golden opportunity to score from the 7-yard line until a fumble halted that advance.
On their next opportunity, though, the Saints cashed in on Abdinoor’s 3-yard run with 3:24 left in the first half after his 53-yard toss to junior wideout Wes Acton put the visitors back in the red zone.
McDonogh matched that score when Jones snagged a Martin pass with 1:12 left in the period to build the lead to 21-6.
Sacks by senior St. Mary’s defensive linemen Jack Bousum and Caleb Kongas helped to thwart the Eagles’ next incursion, although the home team would go on to finish three of their next drives on, respectively, a 30-yard Martin-to-Howard aerial, a 50-yard Egbe bolt up the middle and a 12-yard sweep by Martin.
“I feel like it was a big confidence-booster for us,” Howard said. “We don’t have many guys who had played a varsity snap before this season, so it was good to get one like that.”
Howard’s grab in the corner of the end zone was a thing of beauty.
“I just high-pointed it,” Howard said, chuckling at the thought of comparing himself to former NFL star Calvin “Megatron” Johnson.
St. Mary’s coach Jason Budroni knew that playing against a team with so many talented players would be a challenge.
“We just have to play better,” he said. “We can’t afford to make mistakes and we had to hope McDonogh was sloppy. I thought we played pretty well on defense and then we lost a linebacker (junior Sean Berzins) to an injury and we had a couple of other guys out, too. But I think it’s good for us to see teams like this.”
St. Mary’s had won its first two games, including a 14-12 victory over Loyola Blakefield.
Pictured above: McDonogh senior transfer quarterback Kaden Martin had a banner night for the Eagles as he threw for three scores and ran for a touchdown in McDonogh’s 41-6 breakout win over No. 14 St. Mary’s.
MIAA FOOTBALL
No. 5 MCDONOGH SCHOOL 41. No. 14 ST. MARY’S HIGH SCHOOL 6
St. Mary’s 0 6 0 0 — 6
McDonogh 7 14 7 13 — 41
1st Quarter
McDonogh-Santino Sanchez 25 pass from Kaden Martin (Sam Asplen kick)
2nd Quarter
McDonogh-Stefan Egbe 1 run (Sam Asplen kick)
St. Mary’s-Rocco Abdinoor 3 run (kick failed)
McDonogh-Malachi Jones 11 pass from Kaden Martin (Sam Asplen kick)
3rd Quarter
McDonogh-Preston Howard 30 pass from Kaden Martin (Sam Asplen kick)
McDonogh-Stefan Egbe 50 run (kick failed)
4th Quarter
McDonogh-Kaden Martin 12 run (Drew Marcin kick)