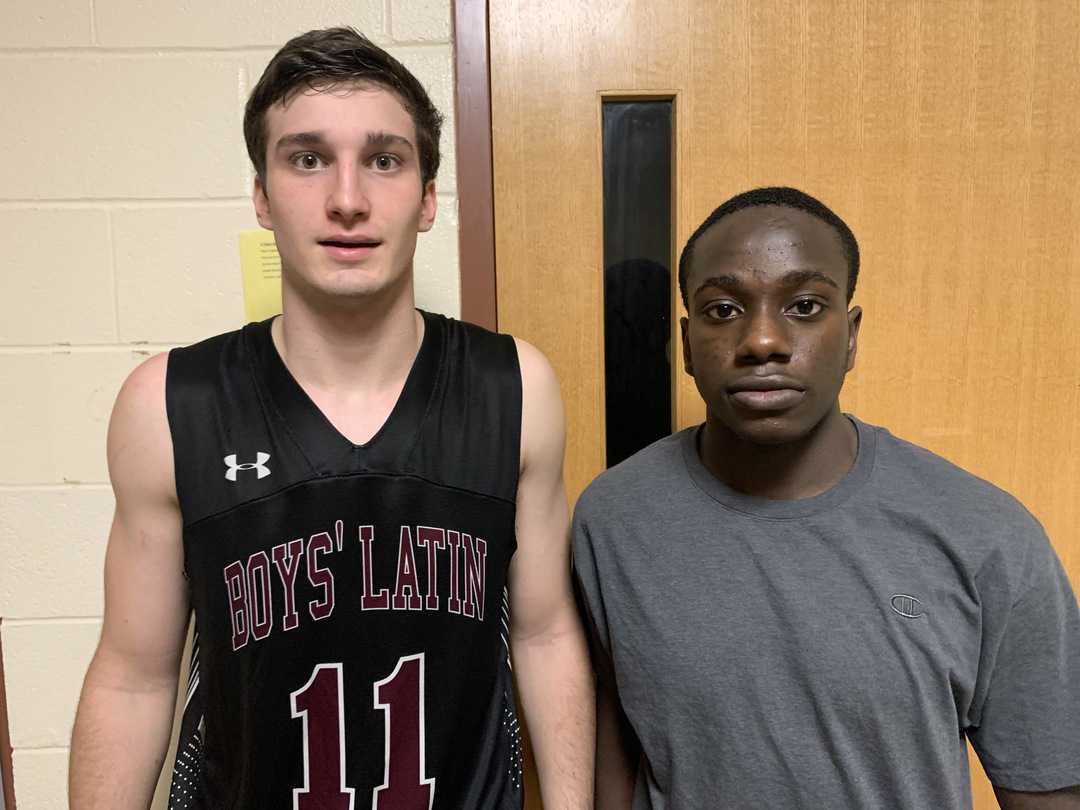 Lorenzo Donadio (left) and Kendall Walker helped Boys’ Latin School basketball to a big victory Monday evening. Donadio had 17 and Walker added 15 as the Lakers snapped a six-game losing streak with a road win at St. Vincent Pallotti to move a win away from a MIAA A Conference playoff berth.

The Lakers’ path is promising after a critical 87-68 triumph over the Panthers on Sister Karen Court in Laurel. Rian Schell and Donadio each finished with 17 points for Boys’ Latin.

Behind a furious second half, the Lake Avenue school gained its first triumph in nearly two weeks. The Lakers (12-12 overall) improved to 9-8 in the MIAA A Black, and needs one more victory to secure a postseason spot. Boys’ Latin plays at league-winless Annapolis Area Christian School (0-17) Wednesday and league newcomer Gerstell Academy (3-14) Friday.

The Lakers had six players score in double figures as senior Kendall Walker added 15 and Tre Green and Michael Austin each finished with 14. Junior forward Will Spencer had 10 for the Lakers, who outscored Pallotti, 55-37, in the second half.

Wade Jackson, who’s committed to Loyola University, posted a game-high 30 points for Pallotti (15-13, 8-9 MIAA A), and sophomore Warren Mouganda added 12. The loss put the Panthers a half-game behind McDonogh (9-9) for the fourth and final spot, but hold the head-to-head tiebreaker with a regular season sweep of the Eagles.

Pallotti can clinch with a victory at Gerstell (3-14) Wednesday or Friday at home against Glenelg Country School (10-8).

Pallotti (8-9) plays at Gerstell on Wednesday before closing the regular season at home against Glenelg Country on Friday. The Panthers can advance with losses to Gerstell and Glenelg Country along with a McDonogh loss to Gilman School Wednesday.

Boys’ Latin has a shot at the No. 2 spot in the MIAA A Black with victories over Gerstell and Annapolis Area and a Pallotti victory over Glenelg Country.