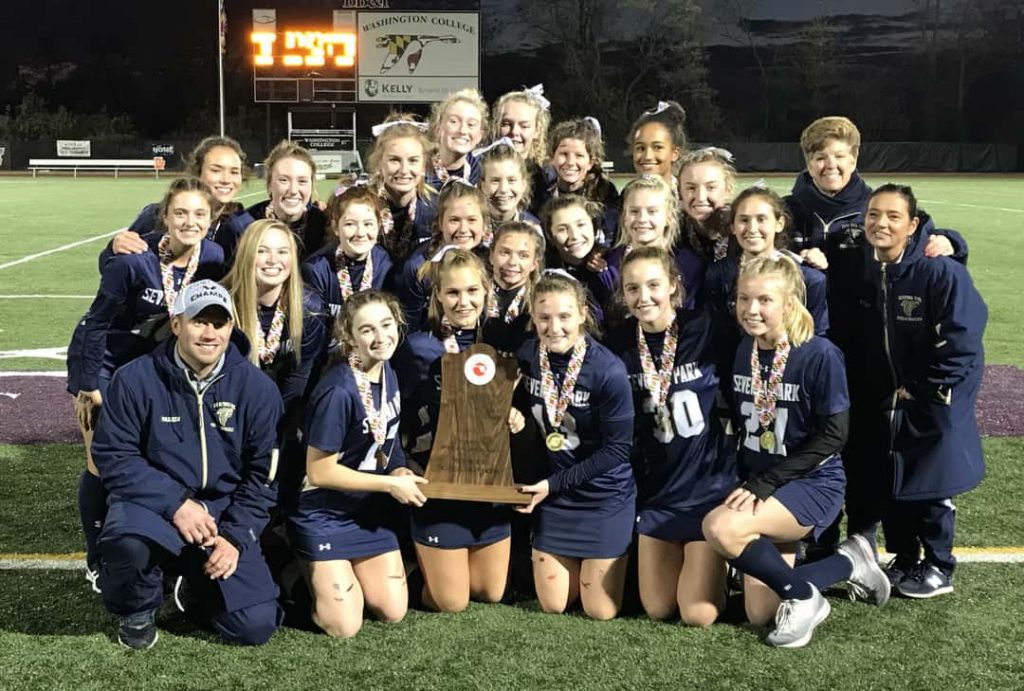 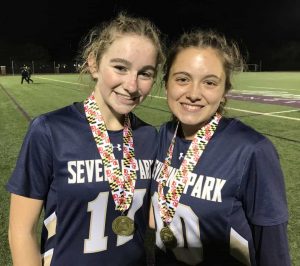 The steady play of Lila Slattery (left) and Kat Esposito’s stroke mastery equaled state field hockey title No. 24 for Severna Park Saturday. The fourth-ranked Falcons got past No. 7 Dulaney, 1-0, in the Class 4A state championship game at Washington College in Chestertown.

Whenever Severna Park High’s field hockey team takes a penalty stroke, opponents do not want to see Kat Esposito step up to the line.

The junior forward has taken three penalty strokes this fall and scored on them all, including the last one of the season Saturday to give the No. 4 Falcons a 1-0 victory over No. 7 Dulaney for the state Class 4A championship at Washington College in Chestertown.

Esposito scored on the stroke with 10 minutes, 15 seconds left in the first half. Teammate Lila Slattery had taken a shot that was deflected away from the goal after hitting a Dulaney player. Esposito was not in the game at the time, but Falcons coach Shannon Garden wasn’t going to let anyone else take the stroke.

In the Falcons’ 2-1 victory over Arundel in the Anne Arundel County championship game two weeks ago, Esposito scored the game winner on a penalty stroke with 46 seconds left in the game. The players wanted Esposito to take that stroke and Garden agreed.

“Ever since then she’s been like our secret stroke girl,” Garden said.

The victory was the 24th state championship for the Falcons (15-3 overall) since 1979. No team has won as many, but Severna Park hadn’t won in four years, so a lot rode on Esposito’s opportunity.

“I just don’t think about it. It’s just easiest to just hit the ball in the goal,” Esposito said. “The goalie was in the center, so I placed it to the bottom left. That’s her stick side, so it’s harder for her.”

“My spot,” agreed Esposito with a laugh.

For the senior class in a Falcons program that has dominated field hockey much of the past 40 years, it was unthinkable to graduate without a state title. The Falcons won three championships between 2013 and 2015, but South River won the past three years.

“This means so much to us,” Slattery, a senior midfielder, said. “None of us have even been here unless our siblings came or we were around the team, so we’ve just seen it happen from the side. We wanted it with all our heart. We wanted it together. We wanted it with this team. This is the last chance we had and we just wanted to get it.”

The title was important to the younger players as well.

“I wanted to win it for the seniors. They’ve been working to hard,” Esposito said. “Coming back from a lot of things, I felt like it was really important to them and to all of us to win.”

The seniors “worked really hard to create a positive environment for everyone on the team,” Garden said, “and it really shows, because everyone on the team is so excited. Even (Friday) at what we called our last practice, they were crying at the end of practice because they didn’t want it to be over and I have all ages on this team freshmen through seniors. It’s an excellent mix and they all feel valued and important and I think that starts at the senior level, making them feel that way.”

The game stared with Dulaney (15-4) making the first surge. The Lions played in their third straight title game and have not won a championship in five appearances in the final.

About 10 minutes into the game, the Lions’ Sydney Snyder sent a pass across the goal that Lucy Jung deflected just wide. The Lions had another shot off a corner shortly thereafter that didn’t reach the goalie.

After that, the Falcons dominated play. They had 16 penalty corners to Dulaney’s five. In the first half, the Falcons took four shots, but the Lions didn’t manage any.

In the second half, Severna Park goalie Charlotte Kramer made back-to-back saves, including one with her hand, but the game quickly turned to the Falcons. The Falcons couldn’t break through again although a shot deflected off the crossbar in the final two minutes.

Anne Arundel County teams have now claimed the past nine state 4A titles.