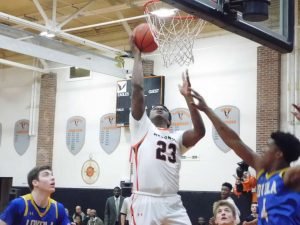 McDonogh’s Curtis Jacobs (23) prepares to put in two of his 10 points during Tuesday’s MIAA A Conference basketball quarterfinal match with Loyola Blakefield. The 11th-ranked Eagles made a late fourth quarter push to knock off the No. 10 Dons, 53-51, in Owings Mills.

Though his team’s season is in its final stages, McDonogh School basketball coach TJ Jordan still describe his team as “babies.” The young Eagles have grown the last couple of months, and now, they’re on the verge of a championship.

After squandering a second half lead, McDonogh regained its composure in the closing minutes of regulation to advance to a semifinal at No. 3 Mount St. Joseph Thursday evening. The Gaels defeated John Carroll School, 73-53, in the other quarterfinal Tuesday.

In a match featuring spirited student sections, McDonogh’s faithful got the final laugh, storming the court to celebrate the basketball team’s first MIAA A semifinal berth. The Eagles featured two sophomores (Jared Billups and David Brown) and freshmen Cooper in the starting five Tuesday with a third sophomore (Dani Sutton-Dennis) coming off the bench.

“They’re still babies. Our thing all year has been growing together,” said McDonogh coach TJ Holmes. “We talk about composure. We knew Loyola was going to make a run and we needed to fight through it.”

“We fought through adversity,” said Cooper. “We want Mount St. Joe on Thursday.”

The Eagles will be in Irvington Thursday, thanks to Cooper, who sparked a late 11-2 surge with a deep 3-pointer, putting the hosts up 45-44, with 2 minutes, 30 seconds left in regulation. After Loyola regained the lead with two free throws, Cooper dropped another a dagger, this one from the corner, putting the Eagles ahead for good.

The Eagles made a defensive stand, and junior Curtis Jacobs’ buried a contested 3-pointer from nearly the exact spot of Cooper’s shot, prompting a Loyola timeout with 1:12 remaining. Billups intercepted a pass and went in for an uncontested dunk, extending McDonogh’s lead to 53-46.

“We always have confidence, but sometimes, we don’t make shots,” said Jacobs. “When we hit those shots, it’s over.”

Jacobs said its rabid student section was huge in the Eagles’ final push. One of the team’s veterans, Jacobs has been impressed by this season’s talented newcomers.

“I love playing with these guys. Last year, I was a young guy so I know what it’s like to be in their position,” said Jacobs, who’s verbally committed to Penn State University for football. “It’s fun bringing these guys along.”

The Eagles got off to an 11-4 first quarter advantage with Jacobs and seniors Drew Green and Lukas Michaelson combining for eight. McDonogh led 28-20 at the start of the second half, after sophomore’s David Green’s transition layup off a turnover.

Loyola (19-12) found its rhythm from the 3-point arc, getting its first lead, 36-33, on Brendan Fox’s dagger with 3:42 left in the third quarter. Mitch Fischer’s two free throws put Loyola, which connected on four 3-pointers in the third quarter, up 38-33.

The Dons led 46-45 with 2:19 left in regulation after two free throws from Tryllian Young. But the Towson school didn’t score again until Conner Hepting’s 3-pointer with 44.8 seconds remaining, making it 53-49.

Fischer, a junior, finished with a game-best 20 points and nine rebounds for Loyola, playing its first MIAA A postseason match in a decade. Fox and Young finished with 11 and 10 points, respectively.

“I thought our guys played really well. We got down early, maybe it was a little nerves, but we settled down,” said Dons coach Josh Davalli, whose team dropped a 52-50 decision at McDonogh during the regular season. “We got the lead in the third quarter and had some open looks up three that would’ve extended the lead. McDonogh hit some big shots in the fourth quarter.”

The Eagles will get another shot at Mount St. Joseph, which got past them, 58-56, last month at Smith Center. The winner will play either No. 4 St. Frances or sixth-ranked Boys’ Latin School for the MIAA A crown, Sunday night at APGCU Arena at Harford Community College.

The Gaels have beaten McDonogh in the past two MIAA A postseasons. 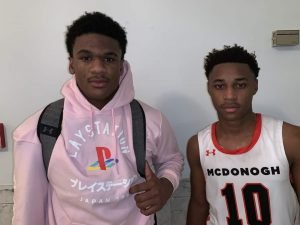 Underclassmen like Curtis Jacobs (left) and Everett Cooper, who had a team-best 17 points, has put McDonogh a win away from the MIAA A final. The Eagles visit No. 3 Mount St. Joseph Thursday evening at Smith Center for a spot in Sunday’s title game at Harford Community College.

“We have four guys who play a lot of minutes and this is their first time playing varsity,” said Jordan. “Competition was something new, trying to figure out what their role on the team was something new and its finally starting to come together.” 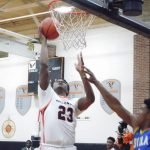 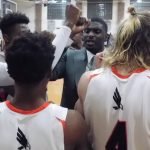 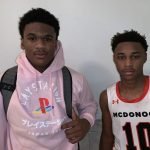 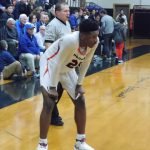 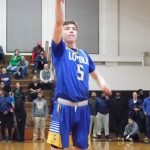 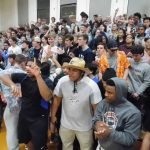 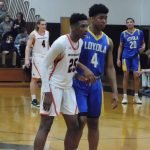 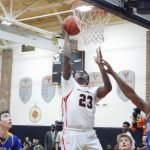 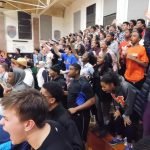 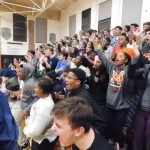 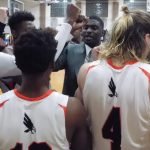 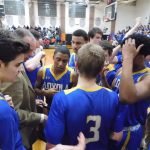 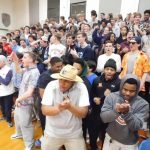 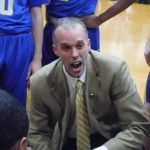 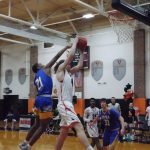 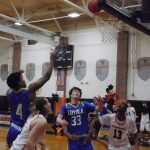 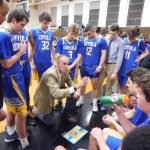 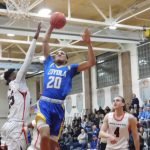