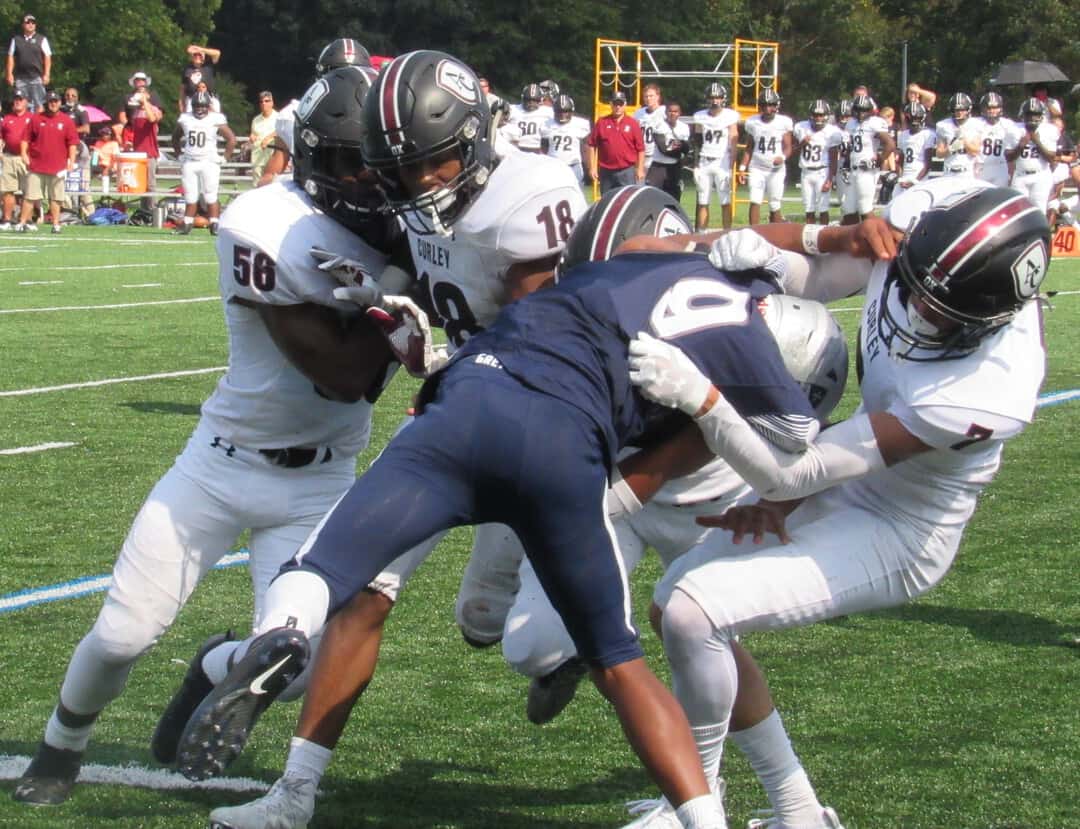 The past, present and future converged for Archbishop Curley football Saturday.

Curley coaches and officials weren’t able to pin down the exact year, but one thing’s for sure: The Friars are 4-0 for the first time since their undefeated 2014 run to the MIAA B title, led by former VSN Offensive Player of the Year and current New Orleans Saint Deonte Harris.

“We were a super young football team, playing a lot of young guys, kids trying to figure out our system and coaches trying to figure out where guys fit,” said Friars second-year coach Brendon Ireton. “We started getting guys in the right spot. We finished last season with a big win and carried into the offseason.”

“We want to go to the championship this year,” said Kwaw. “We don’t want to be 2-8 again. We put in effort every week during the summer and it showed out here today.”

Kwaw, a junior, threw scoring passes to seniors Josh Knapp and Zach Szczybor, and Ronald Clark had a rushing score as Curley built a 27-3 advantage early in the third quarter. Julian Howard, a senior, rushed for 121 of his 178 yards in the second half.

The Friars compiled 325 yards on the ground Saturday.

“When one comes off, I don’t think we miss a beat,” said Ireton. “Our offensive line probably isn’t the biggest in the league, but they’re tough and not going to back down.”

After giving up a field goal on the game’s first possession, Curley’s defense kept Gilman in check until early in the third quarter. Knapp had a fumble recovery and interception, and freshman defensive linemen Stevie Carter recovered a fumble.

The Friars have allowed 31 points in their four 2019 decisions. Last season, Curley allowed 40 points twice in its first four games.

Gilman put the Friars on their heels as freshman quarterback Matt Parker connected with Billy Spillman for 63 yards on the game’s second play from scrimmage. The Greyhounds got a 41-yard field goal from senior Tommy Martinson.

Curley answered with a 10-play, 65-yard drive with Kwaw finding Knapp from 7 yards. Two plays after Carter’s fumble recovery, Kwaw lofted a pass to an open Szczybor in the right side of the end zone.

The Friars took advantage of a short field (drive started at Gilman’s 36) as Clark bulldozed his way into the end zone for a 3-yard score. Curley opened the second half with a 7-play, 65-yard drive featuring Thompson and Howard, with the former covering the final 14 yards.

Gilman got its first touchdown as Rayuan Lane pulled down a Parker deep throw and ran it in for a 73-yard scoring play. The Greyhounds lost their fourth straight Saturday after winning their season opener.

Curley’s win is the first MIAA B decision over an A squad since Boys’ Latin School defeated Loyola Blakefield in the 2017 season opener.

Saturday’s win propels Curley into the MIAA B championship conversation. The Friars will have the chance to formally announce their bid for November’s postseason Friday evening at home against two-time reigning champ St. Mary’s. 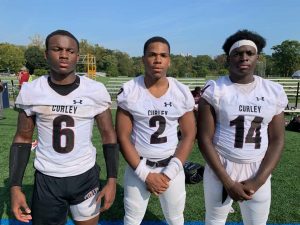 “It’s the next one up…it’s going to be a big game,” said Ireton, who was a Friar assistant for five years under former longtime coach Sean Murphy. “We’ll be studying up and ready to roll.”