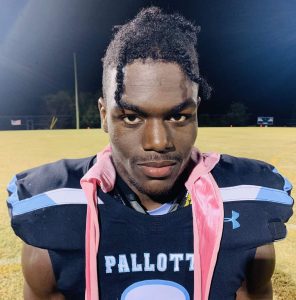 St. Vincent Pallotti High football coach Tony Ashley and his staff were well prepared to meet St. Mary’s for the MIAA B Conference championship on Saturday afternoon at Archbishop Spalding.

After barely beating the Saints, 28-24, during the regular season, Ashley and his brain trust appeared to be a step ahead of the two-time defending champs.

To be fair, the Panthers also had a talent and size advantage that showed in the 42-0 rout that earned the program’s first title since 2016 and second B Conference crown overall. They also claimed two C Conference banners before moving to the B.

“That’s a really talented team,” St. Mary’s coach Jason Budroni said. “They have a lot more talent than we do, so we had to play our best to beat them. They outplayed and outcoached us. They got on top of us and never let up. It was one of those games where every thing that could go wrong, did go wrong.”

And then, when St. Mary’s adjusted in the second half, Ashley said that Pallotti went to a bunched line that continued to keep the Saints off-balance.

By that time, a running clock meant that St. Mary’s would have fewer possession in an attempt to get back in the game.

They never did, primarily because the 35-0 deficit was too much to overcome.

It was only a taste of what was to come from a team hungry for a title and ready to get back atop the conference mountain.

A couple of runs by senior running back Emani Alford softened the Saints’ defense, drawing the secondary up a step or two just enough for senior quarterback Tyler Faison to go over the top to senior wide-out Isaiah Perkins on a 52-yard touchdown pass three minutes into the contest.

The Panthers doubled the cushion eight minutes later after senior safety Osei Dixon recovered a fumble at the St. Mary’s 11-yard line and scored three plays later on a 3-yard Alford rumble up the middle.

The Panthers didn’t stop there, scoring on a six-play drive early in the second period following consecutive runs of 20 and 13 yards by senior running back Mekhi McDaniels to set up a 1-yard plunge by junior Kolby Barnes.

After Pallotti junior linebacker Connor Maloney recovered the ensuing kickoff, McDaniels then got into the act on a 30-yard jaunt through the teeth of the St. Mary’s defense to boost the cushion to 28-0.

The lead widened by another TD with just over four minutes remaining in the half after a 23-yard Faison keeper put the Panthers at the Saints’ 2-yard line.

Alford bulled in for the score to make it 35-0 after senior Andres Pesoa’s fifth conversion kick of the afternoon.

Pesoa made it six straight PATs and a 42-0 bulge after Alford traveled 9 yards following another botched St. Mary’s punt that gave the Panthers a short field at the Saints’ 16.

With the the game out of reach, St. Mary’s still pushed forward on a 31-yard run by junior running back Ki’Sean Gray Dantzler to reach the Panther 3-yard line in the fourth quarter but could not punch it in after fine defensive plays by junior defensive lineman Christopher Boti, Dixon and junior linebacker Brandon Figuera.

St. Mary’s “D” came up with some big plays as well to hold the Panthers to only one score in the second half.

Freshman defensive back Sean Berzins and junior linebacker Colin Bulace both came up with sacks and senior defensive lineman Reed Romo had a fumble recovery, giving the Saints a bit of lift on a tough afternoon.