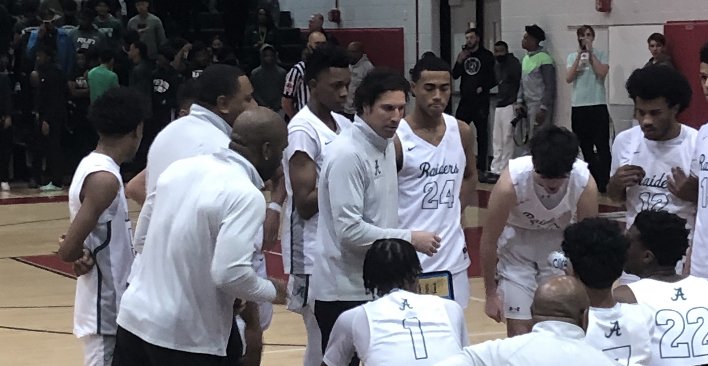 Atholton boys basketball coach Jared Albert (center) talks to his team during a timeout in Tuesday’s Class 3A state semifinal match against Oakdale. The Howard County school fell into a double-digit deficit at halftime and was unable to recover in a 66-50 loss to Oakdale from Frederick County at Blair in Montgomery County.

Not long after experiencing a difficult conclusion to his high school basketball career, a teary-eyed Zach Callender repeated a simple but very poignant explanation as to why his Atholton team exited the Class 3A state playoffs Tuesday evening.

The Raiders struggled most of the night against their opponent’s ball-hawking man-to-man defense. Callendar, who scored 30 points in Friday’s state quarterfinal win over Kenwood, had just seven Tuesday in his finale with the Howard County school.

On the other end, Oakdale (20-6 overall) carved up Atholton’s 2-3 zone behind the mid-range game of Warren Hawkins (21 points, six rebounds), the inside play of Dominic Nichols (12 points, 10 rebounds, three blocks), and the all-around performance of Cameron Domer (game-high 26 points) to open leads of 18-11 after one quarter, 34-19 by halftime and 51-29 going in the final eight minutes.

“We watched film and we noticed there’s a big hole in the middle of their zone,” said Oakdale coach Brandon Long, whose squad will face Huntingtown for the 3A crown, Thursday evening at the University of Maryland. “They really high-pointed their two guards, which really plays into our system with Alex Hawkins catching in the middle. He’s really good at turning and facing, throw a skip pass in there, head fake, and get to the rack. He’s such a skilled offensive player.

“Dominic Nichols had a really great game on the high-low. Cam hit a couple of threes out on the perimeter.  We really thought that sweet spot in the zone really played to our strengths. We were able to attack and not settle for contested jump shots.”

Nichols poured in six points in the paint as he worked his way open behind Atholton’s 2-3 and 1-3-1 zones and Domer splashed in a 3-pointer in the final seconds for the seven-point advantage after eight minutes of action.

Things got worse for the Raiders (16-4) in the second quarter. Oakdale closed the period with a 10-3 run,its  fueled by a pair of Domer 3-pointers and a late transition basket by Hawkins. Callender was called for his second foul with 5 minutes, nine seconds left in the half.

He sat the rest of the half. Besides the three-headed offensive monster of Hawkins, Nichols, and Domer, Atholton’s inability to gain loose balls and rebounds allowed Oakdale more scoring opportunities while limiting most of its possessions to one shot.

“You have to credit Oakdale for executing their game plan,” Atholton coach Jared Albert said. “That’s what they did. I don’t think we really settled in until the fourth quarter. We did battle. I’m proud of our guys.”

Ayyub Rabb finished with 16 points for Atholton. He scored 14 in the final eight minutes as the Columbia school trimmed a 22-point deficit at the start of the fourth to 12 in the final minute.

The Raiders reached the 3A state final four in 2020 before championship weekend was postponed, then later canceled for COVID-19. There was no basketball season in Howard County in 2020-21 because of the pandemic.

Atholton won its first 11 decisions this season before losing its first match at Marriotts Ridge. The Raiders dropped three straight, but rebounded to reach their second straight 3A final four.

“They fought all season long. They dealt with a  lot of adversity throughout the year. For them to give a shot at the state final, that’s all you can ask for,” said Albert. “I’m really proud of what they were able to accomplish this year.”