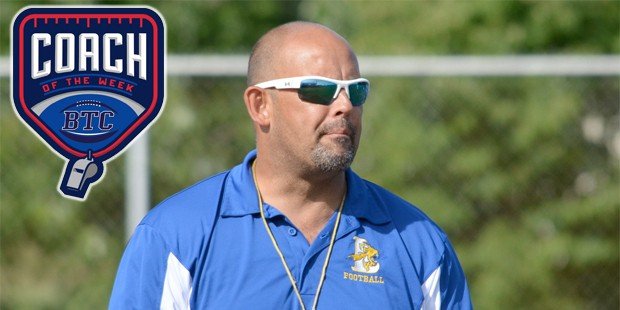 With homecoming looming Friday and the Liberty High football team off to 5-0 start for the first time in program history, the Lions and their faithful are flying high.

Liberty reached the 5-0 mark with a dramatic 36-33 road win over South Hagerstown, as the Lions battled back from 20-0 first half deficit and a 33-14 hole in the second half.

Quarterback Nate Kent threw four touchdown passes in the win, including two late in the fourth quarter to pull out the victory. His third TD toss was followed by a successful on-side kick, setting up the game-winning score.

The big victory and sensational start have captured the attention of football observers from across the region and earned Liberty coach Larry Luthe  recognition as this week’s Baltimore Touchdown Club Coach of the Week.

“It is homecoming week at Liberty High School, and everyone is excited that the football program is off to the best start in school history,” said Luthe, now in his sixth season with the Lions. “We are excited about the opportunity for these young men to be able to leave their legacy at Liberty High School.”

Luthe is quickly building a legacy of his own.

He is now 39-20 during his time on the Liberty sideline and is now tied with Ken Johnson for most wins in program history.

Previously, he spent four-plus seasons as the head coach at Mount Hebron in Howard County and also served as four years as an assistant at Marriotts Ridge. In 2012, he accepted an invitation from former Liberty head coach Jeff Kent to join the Lions staff.

With his oldest son Corey about to begin his high school career at Liberty, and his other son, Ryan, soon to follow, Luthe jumped at the chance. After one year, however, Kent decided to step down and Luthe was offered the head coaching position.

“I spent a lot of time coaching other kids, so when the opportunity to coach my own sons came along, it was a perfect storm,” said Luthe.

Corey became an All-Carroll County selection under his dad and is now playing at the College of New Jersey, while Ryan is a senior leader with this year’s Liberty squad.

“My kids played football with all of their friends in the Sykesville program, and they all came to Liberty with me,” added Luthe. “You spend a lot of time with your team, and to have the opportunity to spend that much time with my own kids was an unbelievable blessing. We had fun, and created memories for the rest of our lives.”

As for the big win at South Hagerstown, Luthe explained that no one panicked when the team fell behind.

“My staff did a great job of remaining calm. They stressed to our players that we have to fight our way back one play at a time. We made some big plays, and had some quick scores late in the game, and we squeezed out a win. It was surreal. The kids in this program really showed some grit and determination to fight back in that game. I am so proud to be part of the Liberty football program.”

According to Luthe, his staff has been making similar contributions all along.

“Matt Shilling (OL/DL) has developed a young line into one that has allowed us to be successful on both sides of the ball, while Will Bristol,our Defensive Coordinator, he has put together some amazing game plans that take away the other team’s best plays and players.

“Brad Swartz is our Offensive Coordiator. He has created a balanced offense that uses our talents successfully. And, Rick Anderson is our Special Teams Coordinator. We have been very good in the kicking game over the past six years and, Friday night, he had us ready to execute the huge on-sides kick.”

Luthe expressed great honor in receiving the BTC Coach of the Week award.

“Anytime you are recognized by your peers, it makes the award more special,” said Luthe. “They know what you go through every day, every week, and every season. They also know that this award is a symbol of the success of the Liberty Lions. I am just the face of an awesome group of young men, great assistants, and great support staff.”

Luthe also recognized the work of the Baltimore Touchdown Club in keeping football strong in the area.

“The Baltimore Touchdown Club is a great advocate for high school football players,” stated Luthe. “My oldest was fortunate enough to play in the BTC all-star game, and it was a great event. hey have also been fighting to keep football alive. Numbers are down all over the state, but the BTC is doing it’s best to get our numbers back up. It is appreciated.”