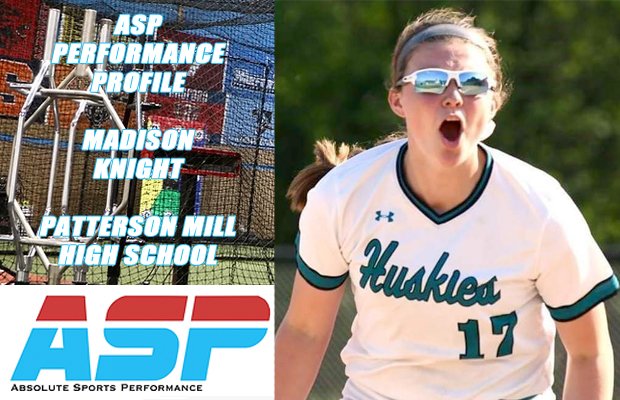 After leading Patterson Mill to a 22-0 record and the program’s first state softball title by beating Allegany in the Class 1A final last spring, right-handed pitcher Madison Knight was well aware that the Huskies would have some heavy lifting to do in 2022. 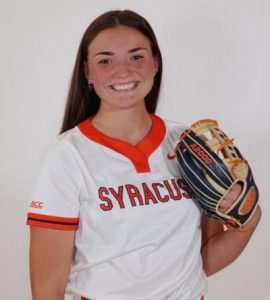 Patterson Mill’s Madison Knight has her Huskies ranked No. 1 in VSN’s Softball Top 20 and charging towards a second straight state title with a 39-game winning streak. Next year she will play in the ACC at Syracuse University.

“Mayday,” as she is nicknamed, said that part of the lifting would be due to the target on the team’s back that goes with having a 39-game winning streak and the No. 1 ranking in VSN’s Top 20.

“It’s a huge target — and it keeps getting bigger as the season goes on,” Knight said. “And we have to face the other team’s No. 1 pitcher every single time.”

Unfortunately for Patterson Mill’s opponents, they also have to face the 5-foot-11, flame-throwing “Mayday,” considering that she has given up just three earned run in 103 innings (0.20 ERA) while toeing the rubber for all 17 wins this spring.

After being named the 2021 Maryland Gatorade Player of the Year, she entered the state final four last June with a 12-0 record and an 0.59 ERA before tossing a two-hit 12-0 shutout against Clear Spring.

Knight also belted a grand slam in the semifinal and then allowed only a single run to the Campers in the finale, fanning 25 batters in the two games to give her 128K’s for the season.

In addition to her pitching this season for coach Jeff Horton’s Huskies, the Syracuse commit is absolutely raking from her cleanup spot in the lineup, boasting a .568 average with nine homers, six doubles, a triple and 27 RBIs.

She said that her two favorite games this season were a 21-strikeout performance against North East and a walk-off triumph in a win over Rising Sun.

“It was freezing cold and I didn’t have my best stuff that day,” Knight said about heading into extra innings of a scoreless game against the Tigers from Cecil County.

With her freshman center fielder sister Mackenzie on third base and one out, she ended the game with one mighty swing that sent the ball sailing over the center-field fence.

“It was awesome,” she said.

“I told the coaches that (the impromptu gathering) was just for the players,” she said about Patterson Mill eventually pulling out a 3-2 win.

She told her teammates “that I know we’re better than this.”

Knight said that things fell into place for the 2021 Huskies.

“Last year, it was our time,” she said. “We weren’t looking ahead then. Now we have to cherish the close games, 2-0, 3-2, 2-1, rather than the 10-0 games. We don’t have the kind of senior leadership we had last year, but we do have some freshmen who are filling those roles.”

Being the emotional leader of the team and one of the most accomplished players in the state did not just happen to Knight.

She works at her pitching craft with a private coach and leans on the Absolute Sports Performance (ASP) facility in Abingdon for strength and conditioning workouts and for honing her swing in either of the 70-foot hitting tunnels.

Before starting at ASP a couple of years ago, Knight made an hour commute to Delaware for workouts.

“Now I live about seven minutes away from ASP, and I can work out whenever I want to,” she said.

Knight added that ASP’s weight-lifting sessions have made her significantly stronger.

“I can hit the ball harder and farther,” she said. “And I can put more spin on my pitches.”

ASP co-owner Travis Hash said that Knight’s level of dedication to improving is unique for someone her age.

“The weight room isn’t what makes her a great softball player,” he said. “But her dedication to training has helped her to maximize her skills and on-field performance.”

“Coach Hash can show me what I’m doing wrong (when lifting)” Knight said. “But it’s not like it’s too demanding,” noting that she can work on her technique at her own pace.

That’s the same method that Bill Goudy and Tom Eller use to help her swing mechanics in the batting cage, she added. They analyze her swing on video and tell her what technique needs her most attention.

“It’s just such an awesome atmosphere there,” Knight said.

“Her self-awareness and work ethic won’t allow her to settle,” he said. “She works diligently to do better in the cage, on the field, in the weight room — along with being a stellar student. Watching her work, you soon realize why she is the best hitter, pitcher and fielder on the field. Syracuse University softball is going to be better the moment she sets foot on campus.”