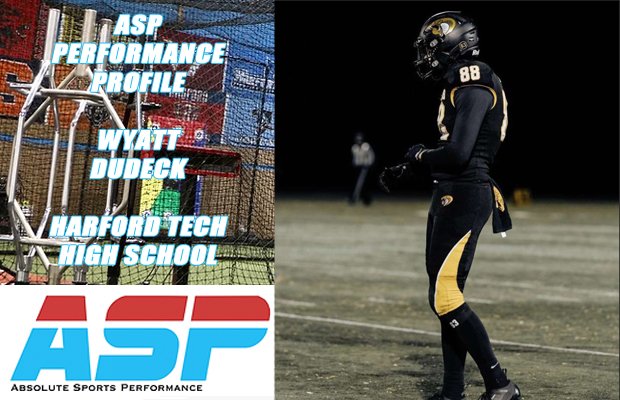 When he first began working out in 2018 at Absolute Sports Performance in Abingdon, Wyatt Dudeck tipped the scales at 185 pounds. 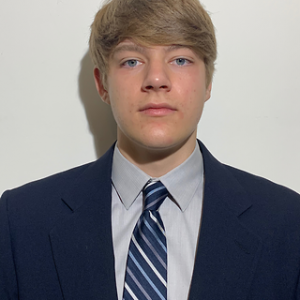 As the recent Harford Tech grad prepares to attend his first football training camp at Towson University as a walk-on defensive end prospect, he now weighs in at a robust 235 pounds — and is looking to add even more bulk to a 6-foot-5 frame in order to eventually find a spot on the Tigers’ roster.

With ASP co-owner and strength and conditioning director Travis Hash leading the way, Dudeck will be in the perfect place to add more mass and muscle to withstand the rigors of collegiate football.

“We reached out to the training staff (at TU),” Hash said about customizing Dudeck’s training regimen to emphasize more Olympic-style lift movements to better prepare for playing against bigger, faster and stronger athletes. “We shifted our focus a little from (preparing for) baseball to football.”

According to Hash, Dudeck already has the work ethic that will serve him well in future endeavors.

“He’s in here training four days a week — during the season and in the off-season,” Hash said.

Moreover, Dudeck never missed a beat when things were beginning to return to post-lockdown normalcy in the late spring and early summer of 2020 when ASP featured outdoor strength and conditioning sessions under a makeshift tent using basic barbells and portable squat racks.

For one thing, his bond with Hash has made working out at ASP an integral part of his life.

“He’s a very relaxed kind of guy,” Dudeck said. “You can tell that he really cares and that he wants to make you better. And that makes you want to be there every day. When COVID hit and I started lifting outdoors, I was hooked. (Hash) takes a lot of time and puts a lot into it. I wish I was exaggerating, but ASP is truly the best place for an athlete. He buys into you and you buy into him.”

While Dudeck played football and baseball in high school, the Cobras were much more formidable on the gridiron than they were on the diamond.

Harford Tech never really got untracked in the spring, posting a 6-15 record with the pitcher/outfielder leading the staff with a 4.83 ERA.

“The season had a lot of ups and downs,” Dudeck said. “I had a pretty good start and then had a slump with my command (of a four-seamer, two-seamer and curve). I threw in the mid-80s — not that hard, but enough to succeed. Once you have a bad start, you try to get it out of your head, but it’s always there. There’s a snowball effect once things go bad.”

He — and the Cobras — had a better time of it in the fall, going 9-2 in football and advancing to the Class 2A/1A state semifinal round.

Dudeck registered 45 solo tackles, 17 hurries, 13 tackles for loss and seven sacks as an All-County defender while snagging one TD pass as a tight end against Patterson Mill.