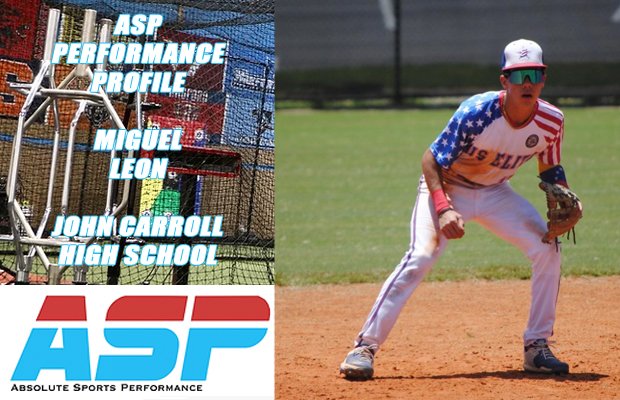 After an excellent summer, promising shortstop has lofty goals for diamond career at John Carroll

Even as a freshman, it’s not difficult to imagine that Miguel Leon could have a positive impact on John Carroll’s varsity baseball team next spring.

After the kind of summer he had playing for the US Elite Mid-Atlantic national squad, his ability is obvious.

And he is not shrinking from the challenge ahead of competing for a spot on the defending MIAA A Conference runners-up, although by no means does he believe that he is owed anything.

“I want to play varsity all four yeas,” Leon said. “But if the coaches there believe that I need to develop on the junior varsity for a year, then I’ll do it. But I’m going to try to make the varsity as a freshman.”

Leon has certainly put in enough hard work to make his case, considering that he has already been an Absolute Sports Performance member working with strength and conditioning coaches Travis Hash and Marie Lucas at the Abingdon facility for two years.

“When you go there, they give you goals to get stronger and add muscle mass,” he said. “I don’t know what I’d do without them.”

Dan Leon said that he was driven to enroll his son at ASP because of its reputation for customizing workouts for young players.

“They take a vested interest in helping each individual in baseball and in conditioning,” he said.

Hash said that Leon’s level-headedness should help him to continue improving — inside and outside the confines of ASP.

“Even when he was away this summer playing tournaments, he’s the type of kid who will shoot you a message asking about what he can do to stay in shape,” Hash said. “He’s an extremely mature kid.”

Hash added that Leon’s gap-to-gap power, speed and strength are impressive for his age-group.

“He’ll grow even stronger,” Hash said. “He may already be one of the stronger — if not the biggest — eighth-graders (in the program).”

With fluid lateral movement and a quick change of direction, Leon has the perfect makeup for a middle infielder.

“When he hits a growth spurt, we’ll have a few more things to work on,” Hash said. “But he does such a good job of optimizing everything he can get from his body.”