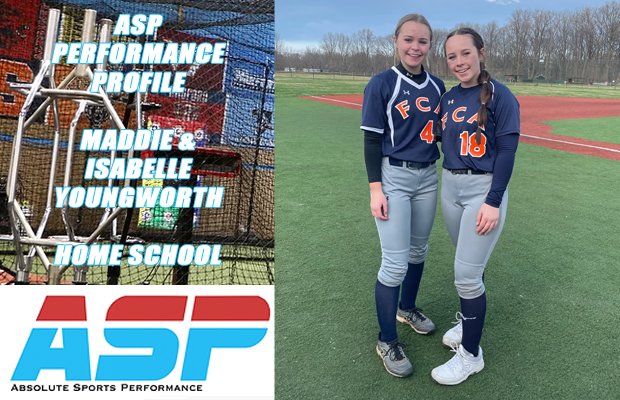 Sister softball sensations are making the most of strength training

The Youngworth sisters, Maddie and Isabelle, are getting stronger every time they work out under the watchful eyes of Travis Hash and Marie Lucas at Absolute Sports Performance.

The sibling softball players, 16 and 14, respectively, have been reaping the benefits of training at the Abingdon facility for a little over a year now, and they both are thrilled with the results of their hard work.

Hash said that the girls “are gifted in the weight room,” in terms of how much energy they expend in their bid to get stronger.

“To us, strength and conditioning is about movement,” Hash said. “So we teach them how to move well and how to use extreme range of motion. We take elements from yoga, powerlifting and bodybuilding — we take what’s useful from traditional disciplines and apply it.”

The Youngworths typically visit ASP two or three times a week — and bring a no-nonsense attitude with them.

“They’re always attentive and locked in,” Hash said. “They’re very coachable and engaged. They’ve made massive improvements in strength, speed and power. They are both potentially the most improved athletes in the facility.”

Maddie, a rising junior at C. Milton Wright, said that she has been gaining strength “in softball and in life” from ASP workouts.

As a catcher, building her leg muscles and improving agility are important facets to her game.

“I feel really great after a workout — invigorated,” Maddie said. “ASP is just helping me grow so much.”

Maddie said that she is also building a bond with Lucas.

“Marie is really helping me to get to where I want to be from a female perspective.”

Isabelle, a pitcher who plans to play for the Fellowship of Christian Athletes club team, said that working on her core strength has been a priority.

“I love learning new things and how I can use everything they teach you for softball,” she said.

She said that she has been doing a variety of squats — including split squats and front squats — while also using broad jumps and band resistance running (with either Hash or Lucas holding the band) to improve her foot speed.

Their parents, Rick and Deb Youngworth, have been pleased with what they’ve seen at ASP.

“Deb and I are really happy with the interaction and knowledge that Travis and Marie bring,” he said. “They keep things competitive and fun. They’re created a really good environment.”