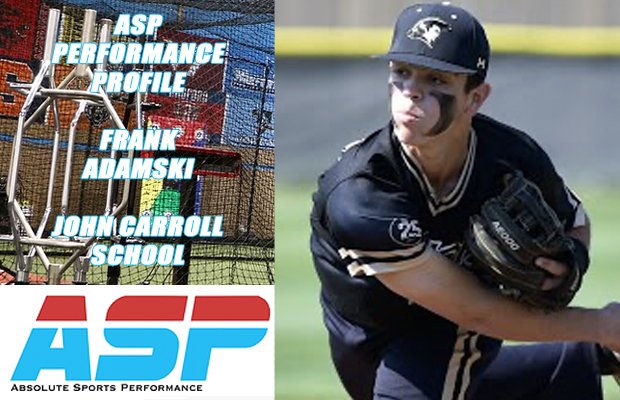 In an MIAA baseball semifinal last month, Frank Adamski stepped to the plate in the fifth inning against Calvert Hall looking to get on base any way possible.

Instead, the then-junior John Carroll third-baseman cleared the bases with a two-run shot to left to give the Patriots a 4-0 lead in what turned out to be a 6-2 triumph.

“Our one goal this season was to get to the championship,” Adamski said. “I had been 0-for-2 with a strikeout and a pop-up, so I didn’t want to be ‘that guy.’ I was sitting on a curve but expecting a fastball. It was up and in and I found the sweet spot on the barrel. Rounding the bases and seeing the joy on my teammates’ faces is something I will never, ever forget.”

Bill Goudy, John Carroll associate head coach and co-owner of Absolute Sports Performance in Abingdon where Adamski trains, said that after the two-time All-MIAA performer turned on the ball, “it got out in a hurry.”

Although Adamski is typically more of a gap hitter, he is very capable of launching much longer drives as well and could develop into more of a power hitter as he adds to his 6-foot, 190-pound frame.

In fact, after he went deep several times with his US Elite Mid-Atlantic club team in a tournament in Conway, S.C. last year, Coastal Carolina University coach Gary Gilmore was smitten by Adamski’s power stroke.

“I had one of the best tournaments I’ve ever had down there,” Adamski recalled.

“He was hitting the ball over the fences down there,” Goudy said. “Coach Gilmore wasn’t going to let him get off campus without signing him.”

According to Goudy, the JC rising senior is ready, willing and able to work on his craft.

“He’s the kind of kid you never have to worry about,” Goudy said. “He shows up and puts in the work — and you see the results. He’s dedicated and methodical. He lives in the (batting) cage while working with either me or Tom Eller.”

“They always have open cage times there,” Adamski said. “And they always find time for me. They work on my mechanics. I need that guidance — it’s always good to get a second view (of a swing). And the weight training with Travis Hash is great, too. I’m there to get bigger and stronger and they help me to do that. ASP has been an amazing part of my life.”

“He makes (Manny) Machado-like plays at third base,” Goudy added. “He and Jose Torres (Calvert Hall/NC State/Cincinnati Reds) are the best fielders at their positions in high school that I’ve ever seen.”

Part of Adamski’s regimen at ASP is to do sets of 10-feet side lunges to hone his lateral movement techniques that are key for all infielders.

He also gets in some long toss outside the facility to stretch out his arm.

“I wouldn’t be the player I am today without ASP,” Adamski said.