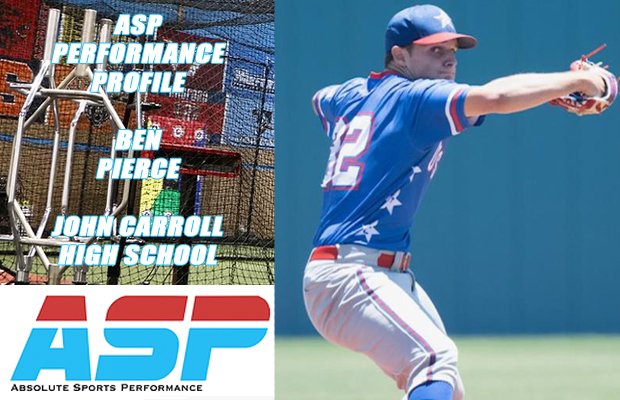 Although he would prefer to be a starter, Ben Pierce’s best moment of the 2022 baseball season for John Carroll came as a reliever in May.

With one out, the bases juiced and the host Patriots nursing a 6-5 advantage, the 5-foot-9, 200-pound southpaw entered the game with the sole purpose of knocking the Dons out of the MIAA A Conference tournament in an elimination game.

Pierce overcame his butterflies by figuring it was time to go for broke against two right-handed batters Loyola sent to the plate.

“I said to myself, ‘Screw it, it’s an elimination game — and could be my last game at John Carroll.’ I just decided to throw the ball as hard as I could. I threw 11 pitches — nine of them fastballs — and struck out both guys. It was exhilarating.”

Pierce certainly has put in the effort to make something positive happen for him and the A Conference runners-up Patriots.

After all, he’s been working out at Absolute Sports Performance for three years after learning about the facility through ASP co-owner Bill Goudy, who also coached one of Pierce’s club teams.

That’s where he’s put through the paces — in a good way — by strength and conditioning coaches Travis Hash and Marie Lucas and pitching instructor Alex Peters in ASP’s Collegiate Development Program that boasts eight other members.

“It’s casual, not super critical,” the Washington & Jefferson College commit said. “They’ll critique you to help you to get better.”

Hash said that Pierce is one of the program’s more advanced athletes.

“A lot of his training is about explosive power development,” he said. “It’s velocity-based training.”

That means that sensors on the bar record at what speed Pierce lifts his weights — and then the results can be compared to previous sessions to evaluate progress.

“We have one-on-one conversations,” Pierce said. “He’ll see something in my mechanics, like on the front side (of each delivery).”

Peters said that the future collegians are told beforehand what to expect from the program.

“We want to make sure they know what their commitment will be,” Peters said, noting that the CDP runs six days per week in three-hour sessions.

“We’ve been trying to get him to realize that it’s his hip that needs to extend, not his knee,” Peters said.  “That gives better rotational velocity — and better energy — through a transfer of power.”

Peters went on to say that Pierce “has been one of the more consistent guys in the program. He was at 84 (mph) and has now brought that up to 87, which is pretty good for a lefty. But our focus is really to help him with better command of the strike zone. He was much better at the end of the (high school) season than he was at the beginning. That game against Loyola is the only time I saw him being that dominant.”

Yet Pierce has been able to sustain that feeling this summer at ASP.

“In our All-Star game, he had that same energy, like he owned the mound.” Peters continued. “He’s added a change and a curve. I showed him a different grip to the curve and he took to it right away. I think he’s ready to go back to being a starter.”