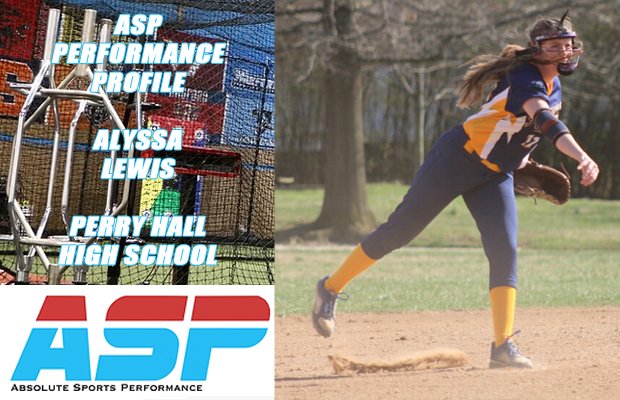 As gaudy as her numbers (.490, 4 doubles, a triple, 2 homers and 16 RBIs) were playing in the spring for Perry Hall against Baltimore County opponents, Alyssa Lewis discovered that she needed something extra in order to thrive against stiffer competition on the summer circuit with her Hurricanes Fast-pitch team.

That’s why the rising junior shortstop, who was one of three captains for the Gators, decided to continue to work out at Absolute Sports Performance even after the Hurricanes’ partnership with ASP concluded.

“Alyssa’s the only one who stayed on,” said ASP co-owner Travis Hash who is also the Abingdon facility’s director of strength and conditioning. “She’s very driven to improve in every way possible.”

Hash said that Lewis, who trains at ASP at least three times per week, had to refine her range-of-motion and stability before getting down “to the fun stuff” of getting stronger.

She did that in a big way recently when she broke the ASP record by hoisting 170 pounds in a back squat.

And having a strong back, ASP baseball and softball hitting instructor Alex Peters says, is key to driving the ball with authority.

Peters, and colleagues Bill Goudy, Tristan Howerton and Tom Eller, are firm believers in the “scap loading” style of hitting that is gaining in popularity, probably because of the positive results it is attaining.
That’s also a big part of a retooled swing Peters has implemented for Lewis which is making her more of a serious threat at the plate.

“Alyssa had a really good high school season,” Peters said. “But she was starting to struggle a little bit against better competition with her club team this summer. We’ve got her more upright — locked and loaded to generate more power. And it’s working. She hit five or six homers the last time she was in the cage (as measured by the HitTrax device ASP employs that measures a slew of metrics). She hit the ball several times (a simulated) 215 feet. We’ve been working on hitting the ball hard to the gaps.

“Before we changed her swing, she was barreling up about 20 percent of the time. Now she’s up to about 70 percent. It’s been a noticeable change to anyone who’s seen her in the cage before.”

Whatever ideas Peters is offering, Lewis is buying into the concepts.

“I have to earn my athlete’s trust,” he said. “This was not a snap decision. It started slow and then it began to click. And that’s because Alyssa is always wanting to get better.”