Arundel volleyball star Brooke Watts is staying dedicated to improving, through home workouts, even building a rebounding board with her father to aid in her training.

When schools closed in March after the COVID-19 outbreak, Arundel volleyball coach Ashley Yuscavage had absolutely no doubt that her top player, Brooke Watts, would continue to push herself while training alone.

Watts, a 5-8 outside hitter and team captain, led the Wildcats to their first state volleyball championship last fall and every day this spring, she’s been working to improve her skills and conditioning. She heads to the track to run two mornings a week, does online workouts with some of her Wildcats teammates three times a week and works by herself on her volleyball skills each day.

Coming from an athletic family, Watts gets lot of support.

Her father helped her build a backyard training partner, a rebounding board. The large board leans, so that when Watts hits or sets against it, the ball comes back to her in the air. It helps her work on ball control.

Yuscavage wasn’t surprised to learn that Watts was already hitting off the rebounding board one day after sending her a video showing how to construct one.

“With her family, work ethic is built into who she is as a person,” Yuscavage said. “Her mom was the first parent to reach out to me when we went into this quarantine for a time period, like “What should the girls be doing? Is there something you want? I want her on top of things.’ That’s how they’ve always been and I’ve never had to ask Brooke to work hard. She’s always looking for ways to work harder.”

While Watts is used to lots of work, she said it has been a big adjustment working out alone.

“It’s a complete change in just the way of pushing myself,” said Watts, 16. “When you’re with the team, you have teammates to rely on and push with you. When you’re by yourself and you’re out there, it’s all on you, but I think it’s about how much you really want to improve and how much you want to get better and that’s kind of how I push myself. It is boring a little bit and I miss my teammates so much.”

Watts is disappointed about missing the second half of the club season with her Maryland Juniors team. She should be preparing for the USA Volleyball Girls Junior National Championships in Texas next week. Instead, she’s continuing to train as best she can.

With her upbeat personality, however, Watts doesn’t dwell much on what she’s missing. She’s focused on the fall season and leading the Wildcats to another Class 4A state championship.

“Coach Yuscavage always talks about how you have to want it first and you can’t like the results but not like the work you have to put into it,” she said. “Working hard is very hard to do. To get out there and to work out every day is exhausting, but I love the feeling of winning and just stepping on the court and being such a competitive player like I am. I just love to win.”

Last fall, Watts set a school record with 324 kills in leading the Wildcats (18-1) to the state title and Varsity Sports Network’s final No. 1 ranking. Going into the state tournament, she averaged 4.64 kills per game on a team with a lot of weapons. 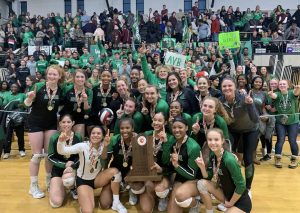 Brooke Watts is hoping to lead her Wildcats to a second straight 4A state volleyball crown.

“We did a backyard team-building activity playing smash ball and she’s the kid when everyone else is laughing and looking nice, she’s dripping with sweat because she wants to win,” said the coach.

The team also had a lip sync competition last season that Watts’ team did not win. Yuscavage didn’t plan to have another one this fall, but she might have to. She said Watts has been asking about it, itching for a second chance to win.

Growing up in a family of athletes, Watts knows exactly where she gets her work ethic and competitive nature. Her father Galen Watts played high school football and also played while in the Navy. Her mother LaTawnya Watts played high school volleyball and basketball. Sister Brittany played volleyball at Arundel and at Alcorn State. Brother Parker also played football at Arundel.

Although track was her first sport and she still competes with the Wildcats indoor and outdoor track teams, her first love was basketball.

“I played basketball very competitively and it was my favorite sport at the time, but my mom didn’t want me to get too worn out with that and she wanted me to keep the love for it, and so she wanted me to play other sports. I ended up playing volleyball and I immediately fell in love with it and my sister worked with me because she played in college, so she knew a lot about it and I got good. I started playing at a competitive level and I just love it.”

Watts will play volleyball in college and has narrowed her list to three Division I programs — East Carolina, Murray State and the University of Northern Colorado.

Yuscavage said she believes some coaches passed on Watts because she’s a bit undersized at 5-8.

“I feel bad for coaches who don’t look at her because of her height. She has so much to give as a player and as a person,” Yuscavage said. “She has always found a way to get to another level. She had a great season as a freshman, but we needed her to play a different position, outside, as a sophomore. There was no complaining and she found that groove… I watched her play at the beginning of club season and she was better than she was last fall. Seeing that constant growth always impressed me.”

Yuscavage said her six-year-old, Harper, “adores” Watts and that she couldn’t ask for a better role model for her daughter.

She also couldn’t ask for a better leader for her team. Watts leadership, she said, will be particularly important this fall to keep the Wildcats from being overconfident with most of their top players returning, including middle blockers Zaria Ragler and Aaliyah Griffith, defensive specialist Gonzalez Medina and setters Ashley Barnes and Abby Niles.

Watts, who has been a team captain since her sophomore year, said the leadership role didn’t come easily to her at first. She learned a lot from former teammate Taylor Wigglesworth, whom Watts calls “the most captain person you could ever meet,” about being encouraging and vocal in addition to leading by example on the court.

The Wildcats likely will need Watts’ upbeat leadership style more than ever now as they plan to try to get together for practice in small groups soon. She said she can’t think about the uncertainty of the fall season, but she’s ready to take on the added pressure of being
defending state champions.

Despite being reigning champs, Watts said, she thinks the team will continue to carry an underdog mentality. To her, the Wildcats have been underestimated in the past even though they reached the state title match her freshman year — the third time in seven years before they finally won last fall.

“This year we’re going to be a younger team,” Watts said. “I think we’re only going to have around three seniors, but we’re used to being a young program. We’re used to being able to build. We know what it takes to be the underdog and win a championship. We’re willing to work hard and push ourselves even more. We want to get back to states and win it again.”