Arundel brings down No. 6 South River in 4A playoffs 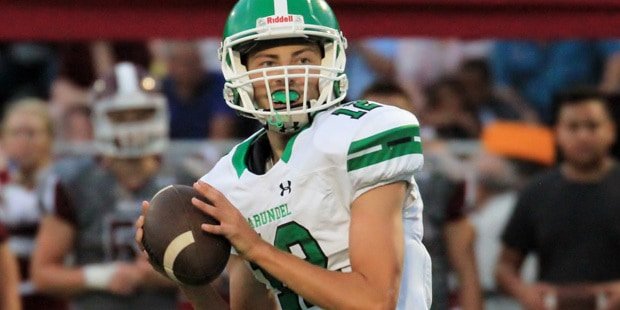 Anne Arundel County continues a tradition of devouring its own; Slye leads a relentless offensive performance by the Wildcats

No matter how dominant a regular season a team may have in Anne Arundel County, it’s good bet the County champion will be tripped up in the regional playoffs by one of its league rivals.

It’s a pattern that has played repeatedly in recent years, including Friday night when unranked Arundel rose up and took down No. 6 South River in a 4A East Region semifinal.

A perfect 10-0 entering the contest, South River saw Arundel (8-3) stage a fourth quarter rally and walk away with a 47-34 upset of the Seahawks.

It was showcase performance for Arundel quarterback Austin Slyes, who passed for 254 yards and two touchdowns. He also added a pair of two-point conversion tosses to boost the Wildcats cause.

Slye connected with Zach Taylor for 51-yards touchdown pass, in the fourth quarter, to push Arundel in front, and Jordan Andrews broke off a 35-yard touchdown run, his second of the night, before Slye connected Shaun Trent-Okoye for a two-point conversion to set the final score.

Leading up the final quarter South River led most of the way, taking a 10-point advantage in the second quarter, but the Seahawks could not slow Slye and the Arundel attack.

Arundel is now on to the 4A state quarterfinals and awaits an announcement on its next opponent as the MPSSAA will reseed the eight remaining 4A teams.

Pictured above: Arunel quarterback Austin Slye threw for 254 yards and two touchdowns as his Wildcats knocked off undefeated South River, 47-34.