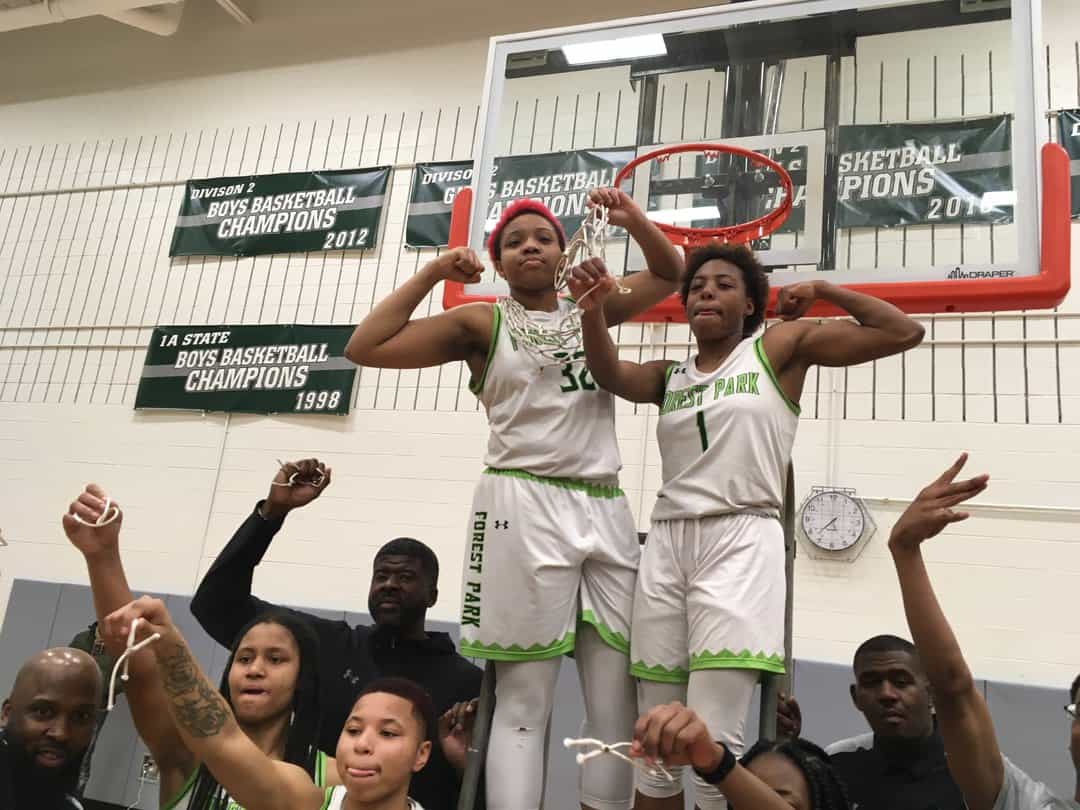 Forest Park junior Neah Henry, who had a game-high 22 points and a slew of rebounds, and senior point guard Josias Mickens flex their muscles after the net cutting ceremony following Friday evening’s Class 2A state girls basketball quarterfinal. The No. 19 Foresters defeated Harford Tech to advance to next week’s state Final Four at Towson University.

Forest Park High’s girls basketball team sparkled like its gleaming new gymnasium in knocking off Harford Tech, 65-38, in a Class 2A Elite Eight showdown in Northwest Baltimore on Friday night.

The victory advances the 19th-ranked Foresters (20-3 overall) to a berth against Frederick County’s Middletown in a state semifinal, the round in which their only two previous state title bids stalled in 2015 and 2016.

The game started and ended well Friday for Forest Park, although the Cobras from Harford County showed some gumption in the middle two periods by outscoring their hosts, 26-21.

It just wasn’t nearly enough to overcome the Foresters’ tremendous start — fortified by an 11-point outburst by senior shooting guard Diamonique Billie — that gave them an overwhelming 21-5 advantage in the opening period.

“We knew coming in what to expect,” said Harford Tech coach Brad Hunt, who guided the Cobras to a 15-2 mark after he took over as head coach when the team was 3-5. “It just took us awhile to their speed. Once we did, we played a lot better. But we just dug too big of a hole.”

The Foresters’ frontline also drew its share of fouls and converted 13 of 16 chances from the line while the Cobras struggled by converting just two of 12 foul shots.

Still, Harford Tech (18-7) began to claw its way back, especially in the third quarter when junior point guard Alexa Baldwin netted a long 3-pointer to close the period and cut a previously substantial deficit to a more modest, 49-32.

“That was a wakeup call,” admitted Forest Park coach Jermaine Dunn. “Basketball is a game of runs, and we knew they’d make one. We got that big lead and then, no matter what you tell them, they think they’re in cruise control. We just had to give a lot more heart and effort in the fourth quarter.”

Not that the Foresters were ever in danger of losing, yet they still had to pick up the pace — and they did in the final frame.

Billie began to restore order when she converted a feed from senior guard Josias Mickens before Mickens finished her own fastbreak.

After Harford Tech senior guard Quren Santiago, who tied Baldwin for team scoring honors with 12 points, hit a short jumper, Henry countered with a jumper and sophomore teammate Danielle Jones had a stick-back.

Moments later, Henry buried a 3-pointer to give her team a 60-34 bulge and end the Cobras’ mild uprising for good.

“I wasn’t worried,” Henry said, responding to a question about the pressure exerted by Harford Tech late in the third period. “We just had to keep our heads in the game. We wanted to show what girls basketball can be. We work as one and we play as one. Now we want to hang one of those (state championship) banners on the wall.”