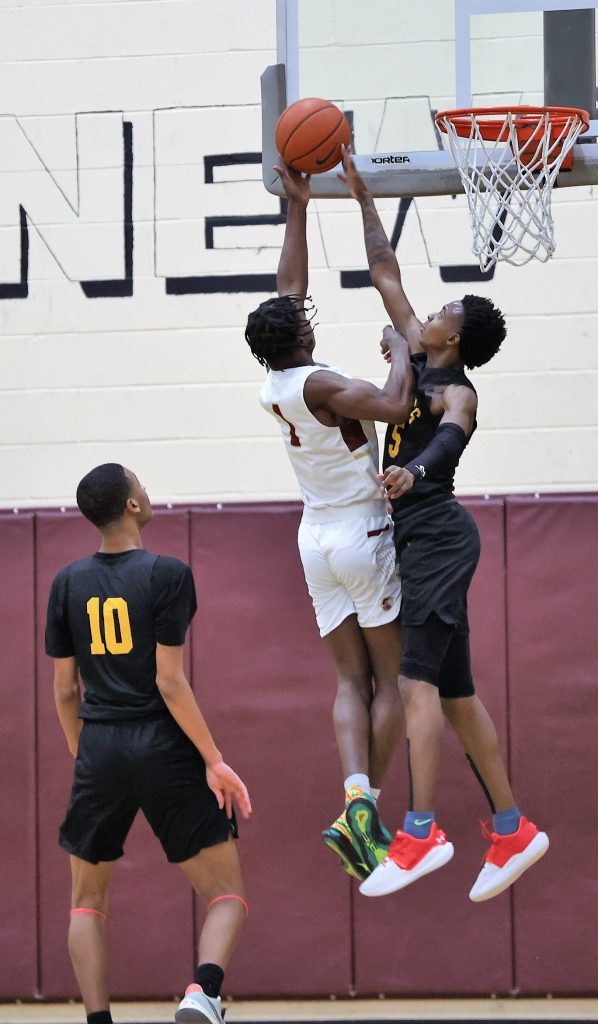 Some wondered if Parkville High boys basketball was championship worthy the first two months of the season.

The last week, the Knights left no doubt they are. No. 6 Parkville defeated eighth-ranked New Town, 60-59, in a Baltimore County Division I contest in Owings Mills. Caron Smith and freshman guard Sincere Barfield each finished with 14 points for the Knights, and Jadyn Williams added 11.

The Putty Hill Avenue school was calm and composed against a relentless New Town comeback in the fourth to remain the area’s only undefeated team at 18-0. The victory, upping its mark to 8-0 in division I play, locked up a spot in the Baltimore County title game Feb. 22..

The Knights earned it, outlasting New Town (12-2, 8-1 Division I), which won the last Baltimore County crown in 2020 (2020-21 season was canceled due to COVID-19). Last Saturday, Parkville rose to the moment in the final quarter to defeat previously undefeated and 11th-ranked Milford Mill Academy.

“We went on the road to the two other top teams, for sure, in Baltimore County and we took care of business,” said Knights coach Josh Czerski. “I like how we’re dealing with adversity at this point in the season.”

With Dorian Jones, arguably Parkville’s best performer fouled out, Smith showed why the Knights’ all-around abilities have separated them for the rest of the area’s public schools. With a 48-40 lead down to 51-48, Parkville had possession, but just three seconds remaining on the shot clock.

Smith got the inbound pass in the corner and buried a 3-pointer, extending the Knights’ advantage to 54-48 with 1 minute, 49 seconds left in regulation.

“I thought he was calling the play 3, but he said it was three seconds left so I had Kam (Wylie) take the ball out,” said Smith. “I knew I was going to hit the shot because I hit those kind of shots all the time.”

Barfield converted two free throws, part of an impressive 20-of-22 effort by Parkville, putting the visitors up 56-48 with 1:12 remaining. But, with four seconds left, New Town had possession, trailing 60-57 after Smith missed Barfield on an inbound pass.

Cam Sparrow’s 3-point attempt fell short (Cameron Kirkland converted follow-up), and Parkville celebrated its biggest win of the regular season. The Knights trailed 9-2 early before a 19-7 run had them up 21-16.

Trailing 22-21, Parkville closed strong over the final two minutes for a 27-22 halftime advantage, thanks to Jones. The senior assisted on 21’s basket, then converted two free throws after a steal. He pinned a Titan layup attempt, and Barfield finished on the other end, spinning around a defender for a layup.

The Knights carried the momentum into the second half as a Smith’s 3-point dagger and a basket by Barfield, pushed the lead to double-digits, 32-22. Jones made it 36-25 with a jumper.

Despite losing Jones, fouling out in the pivotal fourth, Barfield said Parkville has many counters.

“We play as a team…they don’t want Caron to shoot, they don’t want me to touch the ball,” said Barfield. “That creates opportunities for Jadyn, Nic (Jones) and Emezie (Egenou).”

The Titans battled back to 38-36 late in third after a Sparrow dunk, but Parkville answered with a 3-pointer from Williams and two free throws from Egenou. New Town was within 51-48 with 2:22 left in regulation before Smith, after a Parkville timeout, hit a gut-punch 3-pointer.

The Titans didn’t waver, getting a chance to force overtime. Sparrow finished with a game-high 22 points for New Town, and Cameron Blackmon-Bush and JT Mack each had 10.

“I think we put ourselves in position to win the game, but you can’t turnover the ball down the stretch and miss free throws,” said New Town coach Derrick Wise. “I want this to hurt for them because I want them to learn from this. The season’s not lost.” 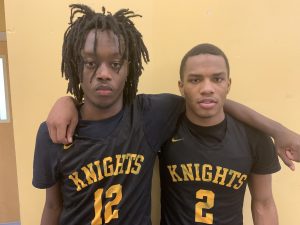 Caron Smith (left) and Sincere Barfield came up big for Parkville Friday night. Smith hit a key 3-pointer late in regulation and Barfield went 4-for-4 from the free throw line in the fourth as the Knights improved to 18-0.

Parkville, which has won 25 straight games, dating to back to 2020, has Catonsville (Monday) and Dundalk (Thursday) to finish the regular season. The Knights will meet the Division II winner for the county crown at a site to be determined.

“We’ve been playing three games a week the past two weeks…it’s been a toll on our bodies,” said Czerski. “These kids prefer playing on the road. They love dealing with adversity.”

“We had to beat Milford and New Town to punch our ticket (to county title game) and we did that, so we’re going to be ready for the county championship,” said Smith, “and we’re going to win it.”