Another milestone for Shelton 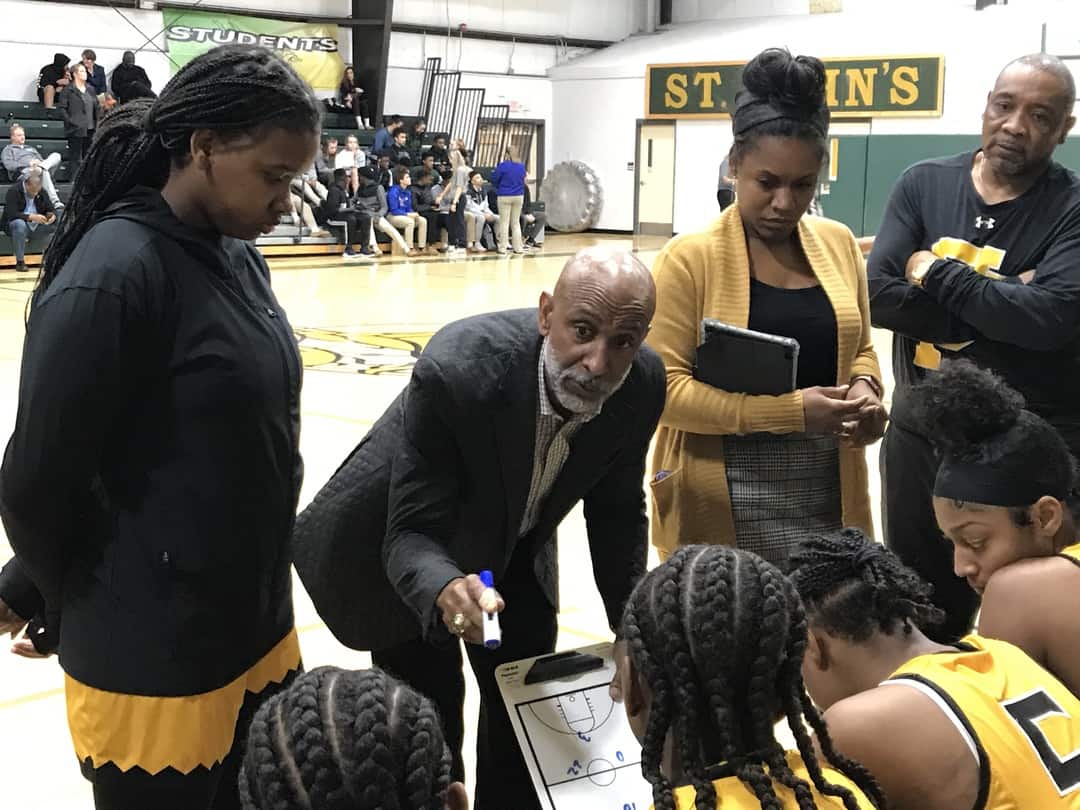 by Katherine Dunn
St. Frances Academy’s Jerome Shelton became the second Baltimore area girls basketball coach to reach 600 career victories with the No. 1 Panthers’ 62-45 win Tuesday night at fifth-ranked St. John’s Catholic Prep in Frederick.
In 29 seasons at the small East Baltimore Catholic school, Shelton has won 15 titles in Baltimore’s toughest leagues and has put the Panthers on the national map.
“First, it’s a testament to faith and trust that my institution has in me and the brilliance of our players who played for me over the last 29 years,” Shelton said of the 600 wins. “I’m humbled and grateful for it and I thank God that he’s allowed me to be in this position to coach some beautiful young women who are very talented so I could go on and have this level of success coaching high school girls basketball.”
Only North Harford’s Lin James has more wins, 608 — a mark Shelton should easily pass this season with as many as 15 games left.
The low key Shelton had no celebration on the court, but senior Angel Reese, whose aunts Kristi and Kortni Webb played on some of Shelton’s earliest teams, said the players knew about the milestone. Reese, who had 27 points, 13 rebounds and five assists in Tuesday’s victory, said it means a lot to her to be part of Shelton’s 600th win.
“It’s been a great four years with him. I’ve learned so much,” Reese said. “He’s a really great coach and I really will miss him when I go to College Park next year, but he’s gotten me ready for college, avoiding a lot of the bad calls I get and keeping me composed through a lot of adversity that I go through.”
To St. John’s Maddie McConnell, in her first season as a head coach, thinking about Shelton’s 600 wins is bit hard to comprehend.
“That’s amazing,” she said. “Nothing but respect for coaches when they hit 600. It’s an impressive accomplishment. That’s a lot of grey hairs. Congratulations to coach. Well deserved. He’s running a heck program.”
Shelton’s program quickly emerged as one of Baltimore’s best year after year. No other program has dominated for as long as the Panthers, winning 12 championships in the IAAM A Conference which debuted in 1999-2000 and two before that in the Catholic League.
The four-time defending A Conference champions are riding their second-longest title run after a six-year reign between 2002-03 and 2007-08. In addition to his players, Shelton credited long-time assistants Nyteria Burrell and Johnny Mack.
A New Jersey native, Shelton assisted with the St. Frances boys team for two years and then in 1990, took over the girls team, building it into a national power. The Panthers are ranked No. 12 nationally in the ESPNW 25 Power Rankings this week and have been regulars in the national polls in recent years.
Shelton, who has had just three losing seasons, earned his 500th win on Jan. 20, 2016. Only four Baltimore-area girls basketball coaches in addition to Shelton and James have reached the 500 mark — River Hill’s Teresa Waters, Arundel’s Lee Rogers and Catonsville’s Mike Mohler, who continue to coach, and Southern-AA’s Linda Kilpatrick, who retired in 2015.
James, who retired in 2013, needed 48 years to win 608 games, but Shelton could do it in 29, another humbling experience, he said.
“I’ve been healthy and I have good players and I have a good staff, so all of those things come into play to make that happen,” Shelton said, “so we’re taking it one game at a time. I never thought I’d be at this point, but it’s a good feeling to have this particular goal and we just want to keep playing well as a program.”
Tuesday night, the Panthers had to work for 600 against a solid No. 5 Vikings team, especially with St. Frances guard Aniya Gourdine and center Zyan Reynolds at home with the flu.
Vikings’ 6-foot senior Kayla Cooper, who finished with 28 points, gave the Panthers trouble with her range as well as her ability to power inside. She also hit three 3-pointers in the game.
The teams were tied at 16 after one quarter before the Panthers broke away with a seven-point run to open the second quarter and extended their lead to 36-26 with a five-point run to end the half. St. John’s turnovers led to four of those points, including a nice feed from Reese to Khalia Turner.
The Vikings (10-3, 4-2 IAAM A) never got closer and the Panthers improved to 6-0 in the A Conference.
Still, McConnell was happy about the way her team battled.
“I knew what we had to do and I think we implemented the game plan,” McConnell said. “We let them go on some runs and that’s what got us in a little bit of a hole. I feel good, honestly, about  how we played. I think we’ve probably given them the best of anybody in the conference right now and next game is a whole new game and a whole new opportunity.”