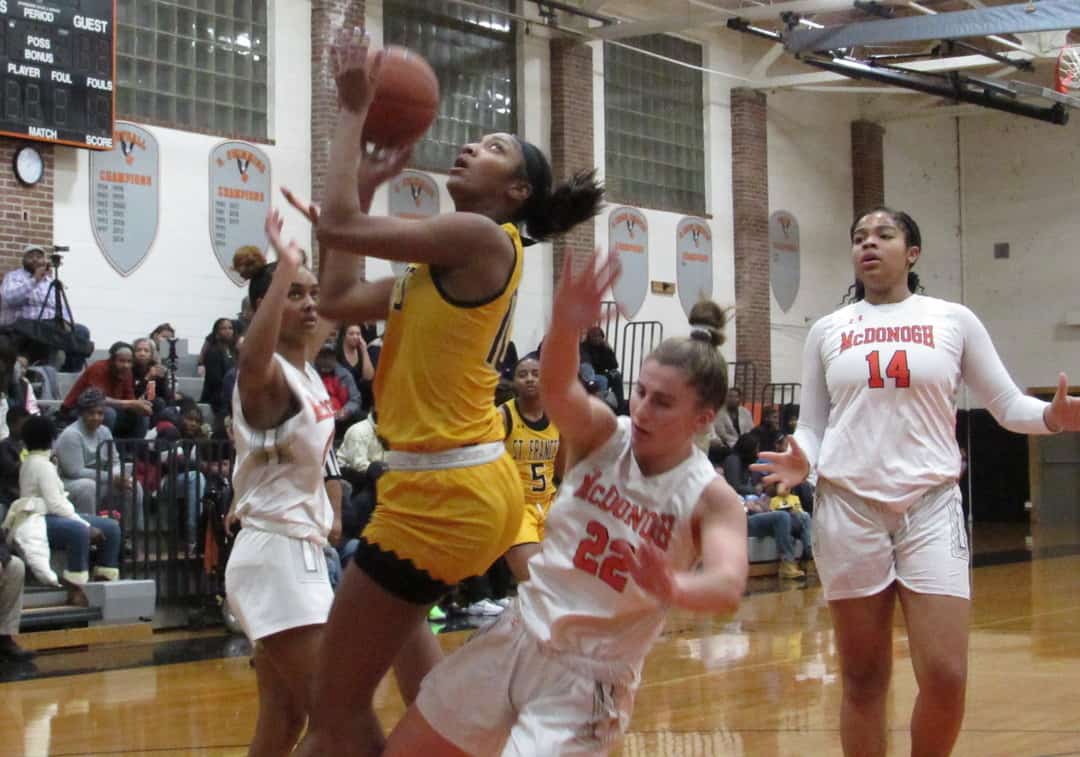 St. Frances’ Angel Reese drives to the basket as McDonogh’s Ava Class tries to defend during Wednesday evening’s IAAM A Conference basketball contest. Reese finished with 25 points as the No. 1 Panthers remained undefeated in league play with a 53-36 victory in Owings Mills.

The Eagles aren’t alone in the misery inflicted by the Panthers, who have now won 49 of their last 51 games against league foes during their run to four consecutive IAAM A Conference titles.

And this winter is beginning to look like déjà vu all over again for the East Baltimore school, seeking a record 13th championship banner this season.

With star post player Angel Reese doing damage in the paint and on the perimeter, combined with fellow senior Aniya Gourdine’s rock-solid play throughout the contest, the Panthers (11-1, 5-0 IAAM A) used a strong second half to surge to a 53-36 triumph over McDonogh (7-5, 1-3 IAAM A).

Reese, who ripped down 12 of her game-high 17 rebounds in the first half, scored 25 points in a variety of ways, including buckets from beyond the arc as St. Frances pulled away in the fourth quarter.

The 6-foot-3 University of Maryland signee said that since she “won’t be the biggest player on the court” in college, she is trying to work on aspects of her game that will help her as a stretch-four with the Terps.

“I was feeling it tonight,” Reese said. “I’ll be playing more outside in college, so I might as well work on it (shooting 3’s) now.”

Shelton said that he is encouraging Reese, the nation’s No. 2 player in the Class of 2020 by ESPN, to go deep.

“She showed her repertoire tonight,” Shelton said, adding that playing in front of a good crowd energized Reese. “Shooting 3’s is something she’ll need to do in college, so she’ll need those skills at Maryland.”

Although the Eagles bolted to an early 7-2 lead behind sophomore forward Nekhu Mitchell and junior guard Jayla Oden, it didn’t take too long for the Panthers to catch up and then go ahead with Reese and Gourdine the main culprits.

Gourdine drained a trifecta to start a 10-0 run that put St. Frances ahead, 12-7, in the final minutes of the opening period.

The Panthers, ranked 14th in USA Today’s Super 25, never trailed after that, even though the deficit was still manageable midway through the third quarter after freshman guard Makaelya Quimby nailed a baseline jumper.

After that, though, Reese popped in a midrange jumper and a stick-back and the young Eagles never got any closer.

Reese finished a couple of strong drives in the fourth quarter before she and Gourdine started to play long ball as the lead bloomed to 53-31 before McDonogh netted the final five points.

“I thought they outhustled us in the fourth quarter,” McDonogh coach Brad Rees said. “But we’re a young team that lost seven seniors from last year’s team. We’ll learn from this. Anytime you go against a team like that with so many good players, you learn things, and I think we’ll get better.”

Shelton said that McDonogh, as usual, gave a good account of itself.

“Brad has a lot of young kids getting starter’s minutes,” he said. “But they consistently play hard defense against us.”