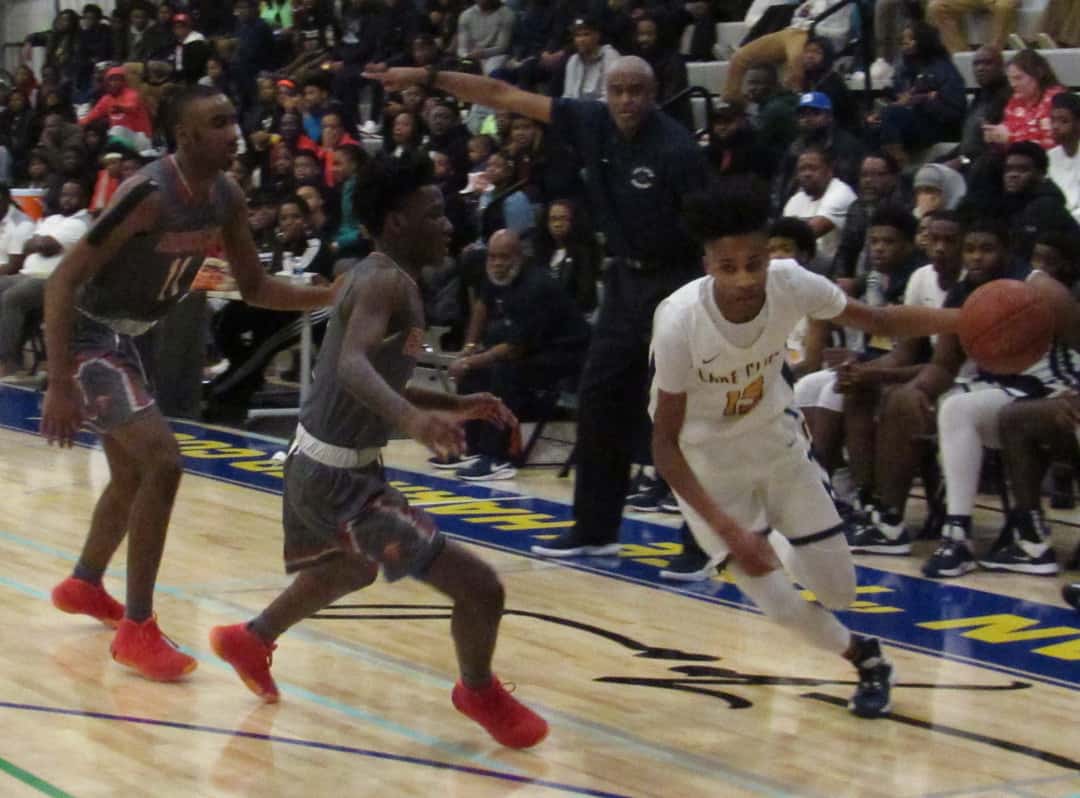 So when his 40-foot runner went through the basket at the end of the third quarter of Friday’s key Baltimore City league match with Edmondson, Gray did something unusual.

He kept his right arm raised as he walked back to Lake Clifton’s bench. Gray’s highlight-film play helped sparked the No. 6 Lakers to a 45-41 victory over the seventh-ranked Red Storm in an A Division contest inside Lake’s new gym on Harford Road.

Gray finished with a game-high 19 points, and Zac Blackwell added 14 for the Lakers (11-4 overall). Eontae Nelson and Tra’Shawn Lewis each finished with 12 points for Edmondson.

The defending state Class 1A state champs overcame a horrific shooting performance and a 10-point second half deficit, clinching first in the division (6-0) and a spot in the city title game. Lake Clifton will play Poly for the city championship, Feb. 25 at Morgan State University’s Hill Field House.

No. 3 Poly clinched first in the B Division with a 71-35 rout of Dunbar Friday.

The Lakers are going to the city final for the first time since 2014, thanks to another resilient effort.

“We got another eight to nine games, but it feels like the 25th game of the season and this is what Baltimore City basketball is about,” said Lake Clifton coach Herman Harried. “It’s very competitive, it’s very gritty and we grind it out.”

“We had to stay together as a team,” said Gray. “Stay positive and play to win.”

Andre Davis followed Gray’s quarter-ending bomb with a dagger from the corner, giving Lake Clifton a 37-35 advantage, its first since late in the opening period. The Lakers went up 39-35 as Gray sliced his way into the lane for a layup with 5:50 left in regulation.

Edmondson (15-4, 5-2 A Division) regained the lead, 40-39, but Gray, a 6-foot guard who plans to sign with Wagner University, answered. He hit two free throws, putting Lake back up.

Gray followed with a steal, but Lewis pinned his layup attempt. Kelvin Spruill got the ball and put it in the basket, making it 43-40 with 2:56 left in regulation.

Lake Clifton didn’t make another basket after converting its first second half shot midway in the third. The Lakers survived three Edmondson possessions to either tie or take the lead in the final two minutes.

It was just another day at the office for Lake Clifton, which overcame a 16-point hole at Mervo for victory last week. Tuesday, the Lakers rallied from a six-point fourth quarter deficit to beat previously undefeated City College.

“We don’t mean to get down. We get off to slow starts and teams get a little bit of energy, but that don’t mean it’s the end of game,” said Blackwell. “We just keep fighting.”

The first three quarters Friday was a struggle for Lake Clifton. The Lakers couldn’t get their perimeter game going and several high-percentage shots in the paint rimmed out.

Edmondson made it difficult with Lewis and Brian Rice getting hands on Lake Clifton’s shots inside. The Red Storm, on the strength of an 11-0 run to start the second, led 25-15 after Rice converted off a pass from Lewis.

Edmondson led 31-21 midway in the third before Blackwell dropped a three-pointer – the first made basket by either team – with 4:13 left in the third. The Red Storm led 35-27, but a 7-0 run capped with Gray’s buzzer-beater gave Lake Clifton momentum.

“I just followed through and shot the ball,” said Gray.

Edmondson did not lead again after Nelson’s three-pointer put them up 40-39. The West Baltimore school was within 43-41 after a free throw from Lewis, but missed three straight free throws, including back-t0-back front ends of an one-and-one.

The Red Storm had one final chance to tie or take the lead. Brian Rice missed a baseline jumper with five seconds remaining.

Edmondson seemed to be in control in the third, but coach Darnell Dantzler said his team got “a little selfish.” He commended them for taking the match down to the wire.

Zac Blackwell (left) and Michael Gray helped Lake Clifton to a third straight come-from-behind win Friday. Gray had 19 and Blackwell finished with 14 as the Lakers clinched a spot in the Baltimore City championship game at Morgan State University in late February.

“They’re going as hard as they can so I can’t be mad at them,” said Dantzler. “We knew we were in for a dogfight. We had to play almost an error-free game.”

The Lakers have a handful of games before the city championship. Lake Clifton last won the city title in 2015.