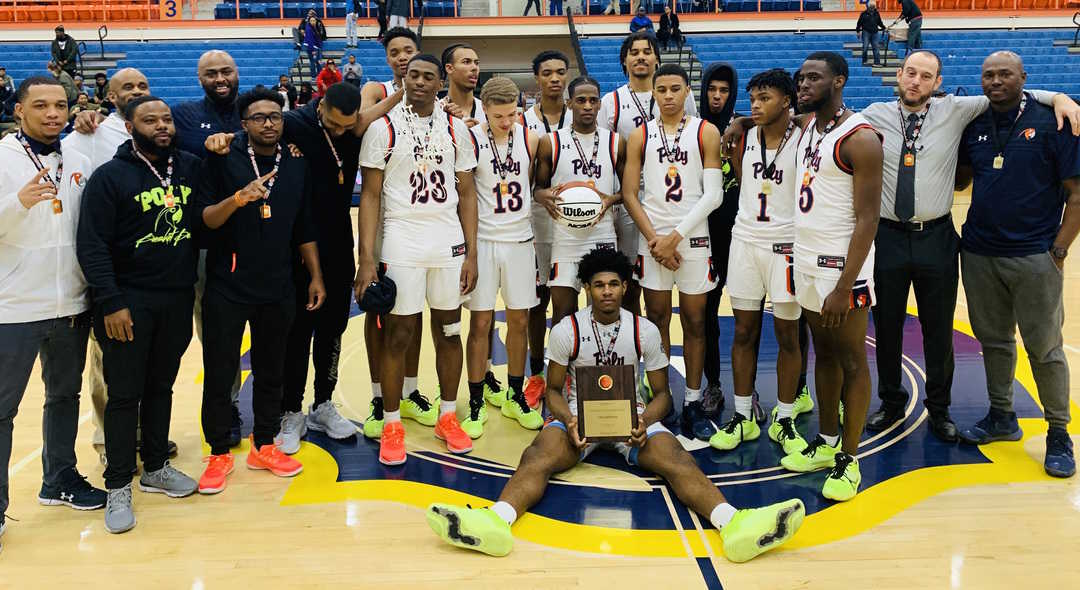 If Poly High boys basketball had any worries about starting slow in Tuesday’s Baltimore City title game, it was alleviated pretty fast.

Justin Lewis won the opening tip and threw the ball to the rim where Brandon Murray slammed it through. The Engineers were firmly on the way to another city title.

The Cold Spring Lane school, ranked nationally by MaxPreps (19th) and ESPN (No. 22), scored the game’s first 17 points, completing a perfect – and dominant – run through the area’s toughest public league. It’s the third city title in five seasons for Poly.

“It’s been a special five years,” said Engineers coach Sam Brand. “The group of guys who’ve come through have been special. Our spot in Baltimore City means a lot to us.”

The ingredients were in place for a letdown.

Then came the opening tip.

“We treat practice like a game…we go hard,” said Lewis, the area’s top senior prospect who will play for Marquette University next season. “We were really anxious to play and prove our worth.”

Lewis, whose alley-oop toss to Murray was the defining salvo, scored the final six in Poly’s 17-0 hammer. He had eight points, including a steal and dunk, as Poly led 21-5 after the opening eight minutes.

“I’m really glad we were able to get off to that kind of start,” said Brand. “You’re always worried when you have a three-week break…I really liked our first five or six possessions defensively – we got stops and transitioned the other way and that’s a great way to start a game to get your confidence back.”

Trailing by as many as 18 points, Lake Clifton tried to climb back. The Lakers pulled to 27-16 late in the first half, but a Lewis tip-in along with two free throws and a follow-up from Murray, pushed the Engineer advantage to 17.

In the third, the East Baltimore school got to within 34-23 after a basket from senior guard Michael Gray, but the Lakers had no answer for Lewis. The 6-foot-7 forward hit two free throws, captured a pass off a Lake Clifton turnover and slammed and scored another basket, making it 40-23.

Lake Clifton got no closer than 12 points the rest of the way. Gray led the way with 28 points and Zac Blackwell added 13.

It was almost a repeat of Poly’s 79-52 rout back in December, which Lakers coach Herman Harried found some solace because of the early season.

“They out-played us, they out-worked us. We didn’t play with confidence,” said Harried. “We didn’t do the things to win 14 in a row. Sometimes, the stage is too big for some people in reality…Poly performed in front of a big crowd and we didn’t.”

Lake Clifton will begin a quest for a second straight Class 1A state championship in the North Region I playoffs next week. The Lakers had won 12 straight before running into another Poly buzzsaw Tuesday.

The Engineers have won 21 straight against city competition, including playoffs. Poly’s last city loss was last season at Patterson, which went on to win to city title and finish No. 1.

Despite getting national recognition, Brand still feels Poly is “undervalued.”

“That identity of being overlooked and undervalued is who we are. The guys don’t have to take on my personality, they’re from Baltimore City, they’re at a public school,” said Brand, whose team dropped a spot in MaxPreps national poll. “Traditionally, we are overlooked and these things continue to show themselves over and over…We take a chip on our shoulders with us everywhere.”

The state’s top public school, Poly, will be an overwhelming favorite to win a record fourth straight 3A state championship. The Engineers will play Franklin or Lansdowne in a North Region I semifinal Tuesday.

“The season’s not over…it’s the one-and-done season,” said Ali, who could become the first city player to win four state titles. “I’ll talk about after we win the fourth one.”