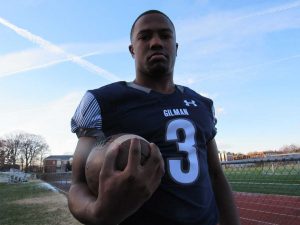 Gilman School’s Brandon Madison, VSN’s Football Offensive Player of the Year this past fall, announced via Twitter he’s committed to the Naval Academy.

Madison thanked his support circle including his parents, coaches and friends before announcing his decision. He would join teammate Brandon Willis, who signed his letter last month.

Madison, who was tri-captain with Willis, Piper Bond and Thomas Booker (Stanford), netted 1,812 total yards and 15 touchdowns for the Greyhounds, who reached the MIAA A Conference final.

The Greyhounds (5-7), who lost to No. 1 and nationally-ranked St. Frances Academy in the final, won just two games the season before.