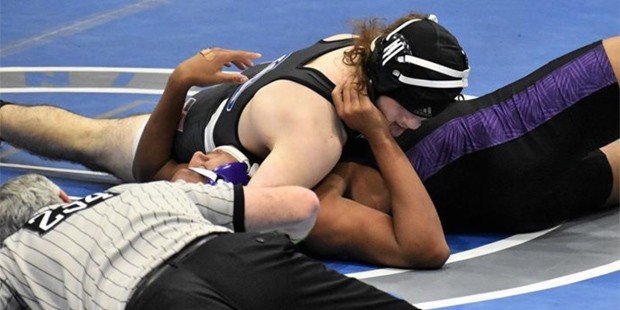 With growing confidence, Sparrows Point’s Jake Rallo has turned into a pinning machine

Jake Rallo is “an absolute monster” and “a total freak athlete,” according to Kramer Whitelaw. 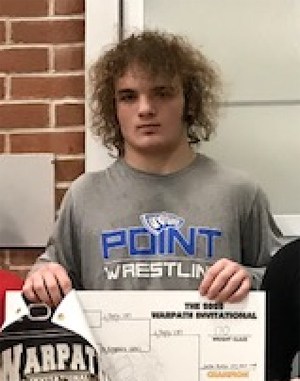 “Jake’s had some issues with self confidence before, but the stars have begun to fall into place, and he’s really taken off as a wrestler from last year to this year,” said Whitelaw, a 29-year-old 2008 graduate of McDonogh High in Owing Mills who trains the 16-year-old Sparrows Point junior.

“Our biggest goal was getting his mind set right and making him believe in how crazy of an athlete he is and how unreal his abilities are. The strength, technique and determination has always been there — he was just lacking in a bit of self-confidence. But he’s really started to buy into everything this year, and he’s become a real beast.”

A returning Baltimore County runner-up, Rallo has indeed been “a real beast” on the mats at 30-0 with 22 pins, wrestling 170lbs, and being on the verge of reaching the 100 career victories mark with 98 wins.

On Thursday evening at 6 p.m., the Pointers (18-0) will be at Owings Mills, the team which dethroned them as two-time defending Baltimore County tournament champions last season.

If successful against the Eagles, Rallo will have a chance to complete his pursuit of the century milestone on Tuesday, Jan. 28. This will be a Senior Night match at Sparrows Point against Patterson Mill of Harford County before the Pointers travel to South River on Thursday, Jan. 30.

“I’m really looking forward to the Owings Mills match. I don’t really know anyone from Patterson Mill, but there are a lot of good kids at different weights,” said Rallo, who lost his county title bout to Hereford’s eventual state runner-up Jimmy Kells, who finished at 38-2.

“Even though I’ve had a lot of pins, I like to stay on my feet because I like takedowns more for building up points. I’ve been mainly using the blast double-leg sort of like a football tackle where you’re just running through them. You can do some great setups and work in other takedowns off that once they start anticipating and reacting.”

During a preseason tournament in October, Rallo won a major decision, 12-2, over Teddy Stinson, who, as a junior at C. Milton Wright of Harford County last season won crowns in the UCBAC Conference and Class 4A-3A North Region before finishing fourth in the Class 4A-3A state tournament. Stinson has transferred to North Harford of Harford County.

“On his lifts, I have seen Jake bench 225 [pounds] three times, squat 315 for reps and pull 405 for a couple reps on deadlift. Jake’s pinned all of the ranked wrestlers he faced this season. Half of his non-pins are forfeits.”

Jake comes by his athleticism honestly. His father, Jamie, played football and run cross country at Archbishop Curley where he has been inducted into the school’s Athletic Hall of Fame, and John, with football and wrestling at McDonogh.

Jakes has access – through Uncle John – to resources which include Whitelaw, who coaches at Gilman, and Rob Sullivan, a strength and conditioning expert and a 2001 graduate of Eastern Tech where he earned a Baltimore County title as a senior.

“I usually go to Kramer over at Ground Control and he helps me a lot,” said Jake Rallo, who stands 5-foot-8. “We’ve worked a lot on reaction time where Kramer helps me a lot with wrestling tall guys who have leverage, advising me to lower my level in order to get underneath of them.”

Jake must work to maneuver around and beneath Whitelaw, who stands 6-foot-1 and weighs 205 pounds.

“Jake is pound-for-pound, from every angle, the strongest kid I’ve ever worked with,” said Whitelaw, a former 160-pound Maryland Interscholastic Athletic Association champion.

“Jake can be in an awkward position where most people would lose their leverage and their ability to be powerful, but he’s just able to push through it. Wrestling has really blossomed as his largest ability, and I’m telling you, he’s the real deal.”

Sullivan agrees, having worked with Jake out of The Baltimore Kettlebell Club in Nottingham, Maryland.

“I have known the Rallos for a very long time. Jake’s father, Jamie, was actually my middle school gym teacher. Things came full circle when he asked me to train his son this past summer. I believe we started sometime in June. Jake was already very naturally strong. My job was mainly to increase strength,” said Sullivan, proprietor of Get Wrecked Fitness who coaches at his alma mater.

“But we were not looking to bump him up several weight classes. My main focus with any athlete is core support. I use kettlebells and steel maces quite a bit for that. Those are my specialty. However, with wrestlers, the sled always end up being used. I recall one day I had Jake sled push over 500 pounds up hill for about 15 feet. As long as I don’t tell him how much he is moving, he does it. If that kid gets ahold of you I imagine it is not a good time.”

Last season, Rallo rose from 170 pounds into the 182-pound division where he gutted out a one-point decision over Owings Mills senior Deondre Space, an eventual regional champion who lost his state title match, 2-0, last March to undefeated Tim Furgeson of Damascus.

Among Rallo’s victories by fall this year are those over South Carroll’s junior state runner-up Antonio Bradford and New Town sophomore Zavion Woodward. Bradford is a returning county and regional champion and Woodward was third at counties and second in the Class 4A-3A North Region.

“Jake’s having a wonderful season, having beaten a couple of top-ranked kids,” said 15th-year Pointers’ coach Mike Whisner. “Jake is only a junior, but he’s putting the time in and, at 30-0, he’s wrestling at another level.”

Whisner has guided the Pointers to county tournament titles in 2017 and 2018 as well as into three straight runner-up finishes in the Class 1A state duals.

The Pointers have earned a tournament titles at the season-opening Scorpion Duals at Oakland Mills High in Howard County in early December.

Sparrows Point was fourth in last month’s Damascus Holiday bracketed portion, this after going undefeated in the duals format of the event, including victories over the host and defending Class 2A state duals champion Swarmin’ Hornets and South Carroll.

Rallo pinned all nine of his opponents at The Scorpion Duals and all 10 at Damascus, including a come-from-behind fall against Evan Kurtz of Georgia power Cambridge High School.

“Right now, I’m just focused on the next match in front of me,” said Rallo. “Overall, though, I’m just looking to continue having a great season with the end goal always being to win counties, regions and states.”