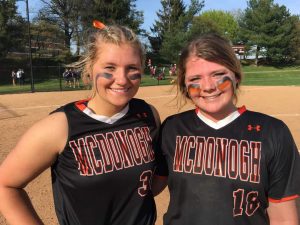 Madison Gemmill (left) and Kearstyn Chapman helped McDonogh tie for first in IAAM A softball Thursday. Gemmill drove in three runs while Chapman pitched a three-hitter, leading the sixth-ranked Eagles to an 8-1 victory over No. 7 Mount de Sales Academy in Owings Mills.

Kearstyn Chapman was a workhorse on the mound for McDonogh School softball last spring. This year, she’s been a Mother Hen to a group of promising young pitcher.

Thursday, Chapman played with the tenacity of a bulldog. The sixth-ranked Eagles defeated No. 7 Mount de Sales Academy, 8-1, in an IAAM A Conference contest in sunny Owings Mills.

Virginia Tech University recruit Madison Gemmill went 2 for 3 with 3 RBI for McDonogh (10-2 overall, 4-1 IAAM A), and freshman Andrea Ottomano drove in a pair of runs. Chapman added a RBI double.

After a shaky start, Chapman locked in for the defending IAAM A champ Eagles, who handed Mount de Sales (8-4, 5-1 IAAM A) its first league loss. The Sailors and McDonogh are tied in the loss column for first.

“The outfield really covered ground. I don’t think we could’ve won without them,” said Chapman. “The Sailors were hitting me, but my infielders and outfielders made the plays.”

So did Chapman, who pitched every game last spring for the Eagles capped with a shutout performance in the IAAM A final. She retired 10 straight Sailors Thursday after allowing four of the first five to reach base.

The junior knocked home a run with a ground rule double in the fifth. She raced off the mound to corral a pop up in the sixth. After a wild pitch, Chapman raced home, sliding in to beat the catcher’s tag for the Eagles’ final run in the bottom of the sixth.

Chapman, who was slow to get up after scoring, struck out the side in the seventh to close it out. She allowed three hits and struck out eight.

Chapman said her change-up and screwball worked for her with the rise ball to close out the batter. She’s pitched in about 1/3 of the games this spring, sharing duties with Ottomano and freshman Harper Allee-Press.

“She’s really taken upon her shoulders to bring this young team hopefully into a championship team,” said McDonogh coach John Folfas. “She’s leads in our practices and games.”

Chapman started slow as Mount de Sales had a 1-0 advantage four batters in after Davidson’s RBI single. She walked the next batter, putting runners at first and second with an out, but the retired the next two batters to escape.

McDonogh answered in its first at-bat with Gemmill RBI single and Ottoman’s RBI double. Ottoman had a RBI single and Gemmill scored on Abbi Nevin’s single, extending McDonogh’s lead to 4-1.

Gemmill made it 7-1 in the fourth, singling home Emma Lach and Chapman. After allowing a leadoff double in the third, Chapman didn’t allowed another runner until Davidson reached on an error in the sixth.

Sailors coach Kenny Magersupp, who coached Chapman on the club circuit, wasn’t surprised by her performance.

“She’s a force on the mound. She’s not a pitcher, she owns the circle,” said Magersupp, whose team was held to its lowest output since the regular season opener against Arundel. “When she’s on, you’re not going to beat her. We tried to go small, we couldn’t executed. We tried different things. She can carry them all the way.”