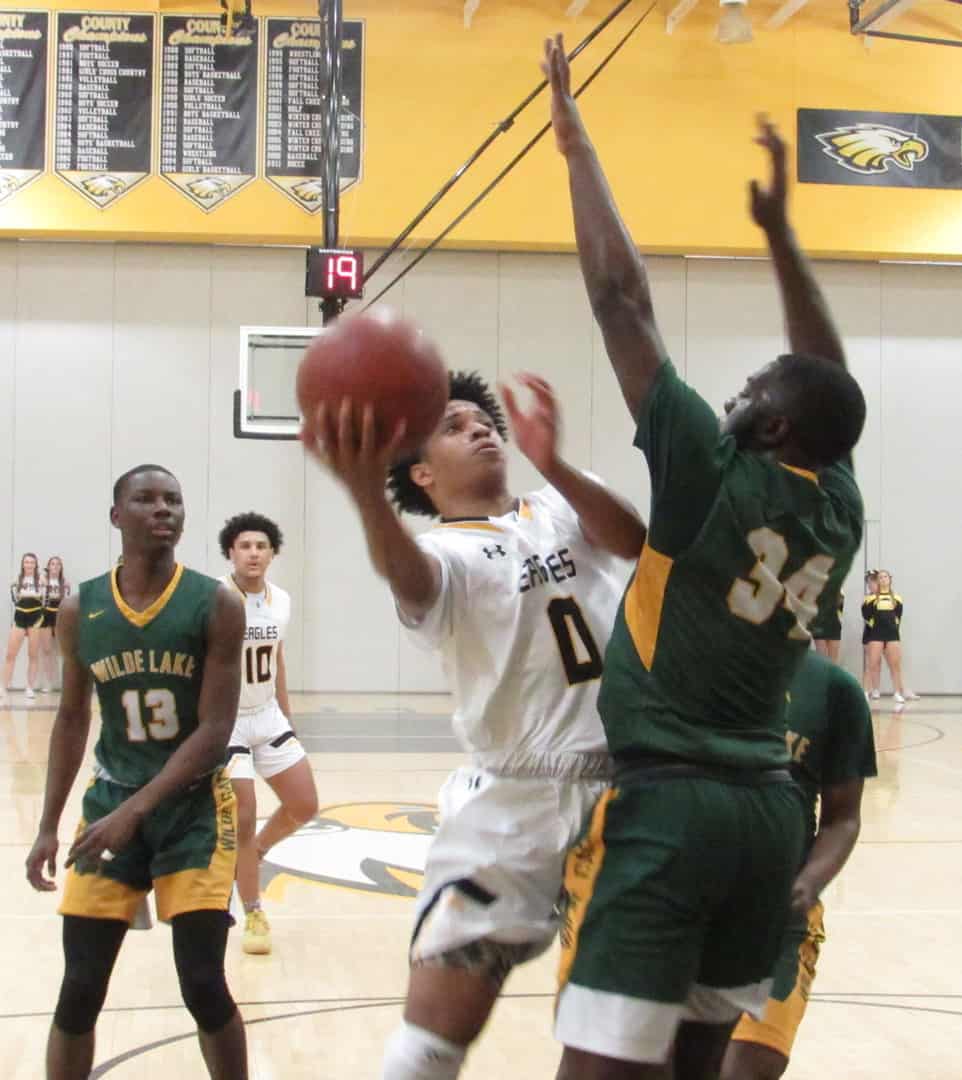 Northeast guard Jaylin Albury heads to the basket during the Class 3A state boys basketball quarterfinal against Wilde Lake earlier this month. The senior, who led the Eagles to their first state Final Four in 37 years, was named Anne Arundel County’s Player of the Year by the league coaches.

Though cut short, this was a special season for the Northeast High boys basketball team.

The Eagles won a region title for the first time since 1983, and after a victory over Wilde Lake in a Class 3A state quarterfinal, were set to take on Poly in a state semifinal. That game, of course, was postponed due to concerns over the coronavirus pandemic.

If that game does not get made up, Northeast will have to settle for a 22-win season, which included a county-championship game victory over Annapolis.

Playing the most important position on the floor, point guard and three-year starter Jaylin Albury was the catalyst for the Eagles’ historic season. His coach, Roger O’Dea, knew he was one of the best players in Anne Arundel County. When the county’s public-school coaches met earlier this month, they solidified O’Dea’s claims and named Albury the Anne Arundel County Coaches Association Boys Basketball Player of the Year.

“I knew he was going to be good,” O’Dea said. “Coming into the season, I wanted him to get named to the first team. He’s the best point guard in the county and I knew he’d be in the top 5 of best overall players.”

For Albury, it was a measure of vengeance after not getting named to the first team last year.

“It’s an honor and it’s something I worked for all year after not making the team last year,” he said. “It’s an honor for them to recognize me.”

With an average of 16.8 points, 6.4 assists, 7.3 rebounds and 4.1 steals per game, Albury was consistent all year. When the stakes were highest, though, he really came through.

Albury capped his playoff run when he scored 33 points in the victory over Wilde Lake in the state quarterfinals. On the way, he hit a buzzer beater to beat Kent Island in the Class 3A South Region II final and led the way with 18 points, 11 assists, seven rebounds and five steals in a 20-point win over Easton. Prior to the start of the playoffs, he scored 22 points in a victory over Annapolis in the county championship game.

“He basically took the games over,” O’Dea said. “He realized he was a senior and didn’t want anything to be his last game. He put the team on his back.”

Said Albury: “I just felt like I didn’t want it to be over with. I just wanted to leave my mark and go out with a bang.”

Albury had 167 assists this year to just 71 turnovers. He increased his career assist mark to 411, which is a school record that had stood since 1992 (Gene Pleyo; 341 assists).

“I didn’t really think about it until midway through the season,” he said. “To have that in my name is an honor. It’s not only for me, it’s for all the guys I’ve played with.”

Though he missed out on getting additional looks from college scouts who would have been at the state semifinals, Albury has drawn plenty of interest from college programs, including California University of Pennsylvania, Frostburg, Kentucky State, Hood College, Goucher College and Penn State-Altoona.

“It was amazing, definitely the best season I’ve had,” Albury said. “The whole year we started strong from the Chesapeake game to the Wilke Lake game. We never let the four losses bring us down or take us off track.”