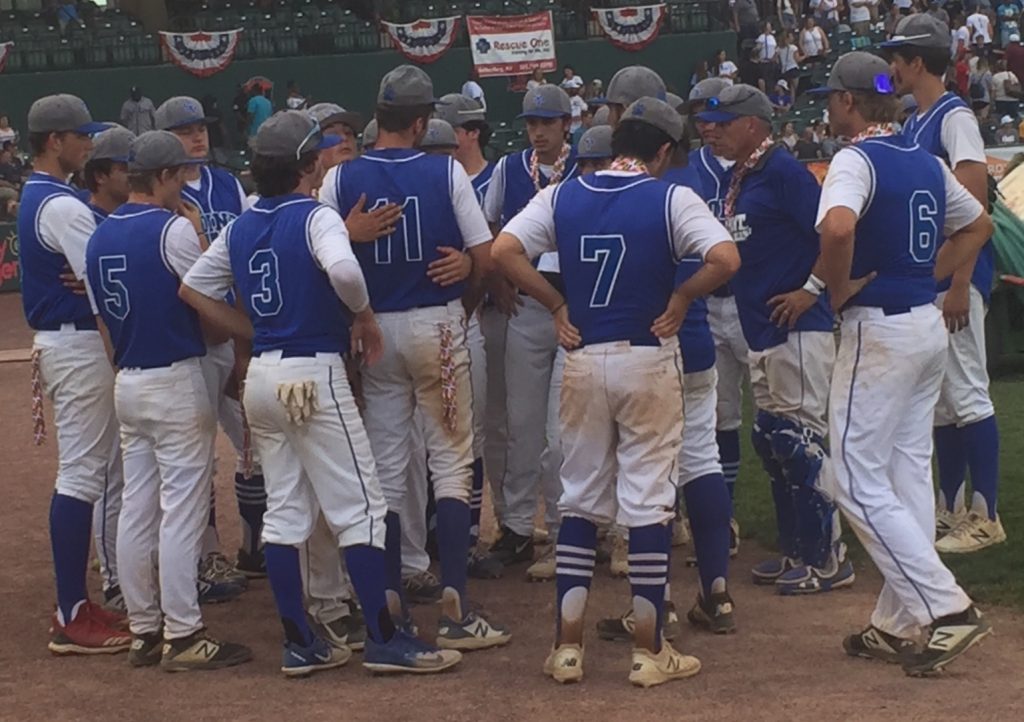 Sparrows Point’s baseball team gathered after Friday’s Class 2A state championship game at Regency Furniture Stadium in Waldorf. The Pointers led 7-1, but LaPlata scored the final seven runs, capped with four in the bottom of the seventh, for an 8-7 victory.

One strike. That’s all the stood between Sparrows Point High and its first state baseball championship since 1979 Friday afternoon in the Class 2A championship game at Regency Furniture Stadium in Waldorf.

Sparrows Point scored three runs in the top of the first and eventually built a 7-1 lead against La Plata. But as the game progressed into its latter stages, the Warriors chipped away until they had pulled to within 7-6 with the bases loaded and two outs in the bottom of the seventh.

La Plata’s Chet Bowling punched an 0-2 pitch up the middle to drive home two runs for an 8-7 victory.

It was truly the thrill of victory for La Plata (16-1 overall), which won its second straight title.

For Sparrows Point, it was the definition of heartbreak.

“I tell you what, we weren’t supposed to be here. We fought every single game. These kids have so much heart. The effort they put in was amazing,” Sparrows Point coach Marc Kline said. “They know what this feels like. They did this to somebody this week and now it was done back to us. When you run out of pitching it’s hard to keep going.”

Sophomore Mark Shelley had taken the ball to start on the mound for Sparrows Point (11-3) and delivered a gritty 5-1/3 innings, holding the potent La Plata offense to just one run until the sixth inning. La Plata’s Robbie Shelton hammered a three-run double to pull the Warriors to within 7-4 to put the squad in position for its dramatic seventh inning comeback.

Ultimately, the Pointers, who defeated North Harford in Wednesday’s state semifinals (9-4) and Boonsboro in the quarterfinals (2-1) Monday, just ran out of arms and struggled to throw strikes in the seventh inning. La Plata scored four runs in the bottom of the seventh to complete its rally with the benefit of just one base hit – Bowling’s game -winning single.

“We were trying to get guys in there to throw strikes. Mark Shelley was a relief pitcher. He had five appearances all year. He started the game and came out and just gut checked,” said Kline. “He just ran out of gas in the sixth inning. Then the other guys came in and did their best. They threw strikes. They did what they’re supposed to do. The heart of that lineup over there, the real deal.”

A couple of hours earlier, the Pointers started auspiciously when Mike Gamble led the game off with a double. Singles by Wayne Brooks and Ryan Mitchell followed, and by the time the top of the first reached its conclusion the Pointers had put three runs on the board. The lead grew to 5-0 an inning later when Kameron Locklear and Gamble scored on RBI singles off the bats of Brooks and Mitchell.

La Plata got on the board in the third when Alex Borges’ one-out single drove home Shelton, who had tripled to center the previous at-bat. But the Warriors stranded runners in scoring position in both the fourth and fifth innings while Sparrows Point extended its lead to 7-1 on Ryan Zickefoose’s two-run single in the top of the sixth.

Shelton’s three-run double in the inning’s bottom half breathed some life into La Plata’s comeback aspirations, and in the bottom of the seventh the Warriors were able to parlay three walks and two hit batters into a couple of runs before Bowling stepped to the plate with the bases full.

“It was an amazing baseball game,” Kline said. “When I go home and I get over this whole thing, I was part of something special. This was amazing.”

While the run for a state title fell just short of the goal, Kline took solace in what his team accomplished in a season that almost wasn’t and that began without the promise of a postseason at the end.

“We weren’t even supposed to be here,” he said. “They were going to take everything away from us, baseball again. All of a sudden we’re playing. We had to wait a month-and-a-half to know we were even in a state postseason.

So for us to be able to have this spot, how many teams are home? It’s amazing. Amazing for these kids to keep fighting. All the regulations, the wearing of the mask, everything they did to fight through the whole thing and still have fun.”