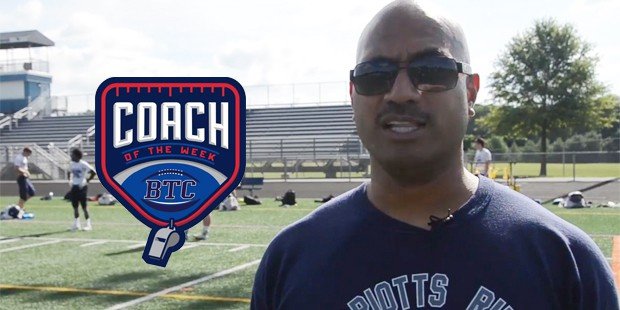 With less than a minute to play and River Hill apparently set to run out the clock, in a Howard County football game Friday night, the Marriotts Ridge football team forced and recovered a fumble, before scoring a tying touchdown and paving the way for a 15-14 overtime victory.

It was not only a huge win in the battle for the 2019 Howard County football championship, it was the first win in Marriotts Ridge school history over River Hill. It also earned the Mustangs head coach Marcus Lewis recognition as this week’s Baltimore Touchdown Club Coach of the Week.

Lewis did not downplay the significance of the win.

“The win versus River Hill is one of the two biggest wins in program history during my tenure here,” said Lewis. “I was really excited for the players because they achieved something that had never been done in school history. Its a memory that can never be taken from them and they have worked extremely hard for it.”

Part of the drama of overtime was Lewis’ decision to go for a game-winning two-point conversion after his team followed a River Hill touchdown, on the first possession of OT, with a touchdown of its own. Lewis made the call after a River Hill penalty moved the ball inside the two yard line.

“River Hill got an offside penalty putting the ball on the 1.5 yard line,” said Lewis. “I felt like it was our best chance to win the game so we went for it. To beat a quality program like River Hill you have to take chances. We did and were fortunate that things worked out for us.”

Lewis is no stranger to winning football, especially in Howard County. In 1988, while playing for Oakland Mills, he was named the Howard County Player of the Year and earned a scholarship to continue his playing career at the University of Delaware. He has been coaching high school football for the last 24 years with stops at Oakland Mills, Magruder, Woodlawn and Mount St. Joseph. Lewis is in his seventh year as the head football coach at Marriotts Ridge, but has been at the school as a teacher and coach since it opened 15 years ago.

According to Lewis, the Mustang defense kept his team in the game.

“Our defense is the backbone of not only this team but our program as a whole. They kept us in the game long enough to steal the win and its a very good unit. Joe McCulloh our defensive coordinator does an outstanding job with that unit.”

“The guys on this coaching staff are family,” said Lewis. “They mean the world to myself, the program and all the kids they coach. Our goal is to provide each player with the tools they will need to succeed in the classroom, on the field and more importantly in society as they move forward in their life.”

Speaking of moving forward, the coach hopes the win over River Hill leads to even more success.

“My hope is that it will give us confidence that we can compete with the good teams as long as we remain focused.”

Lewis also spoke of being honored by the BTC.

“There are a lot of great coaches in this area,” he said. “But honestly, this award is for the assistant coaches and more so the players. The players are the ones doing the work so, really, they are the reason the award is even possible. I am extremely honored for the selection of this coaching award.”

Finally, Lewis shared his thoughts on the work of the Baltimore Touchdown Club.

“The BTC is a great organization that does a tremendous job of promoting high school football throughout the State of Maryland. The work done is invaluable and appreciated by many of the coaches throughout the state other than myself.”