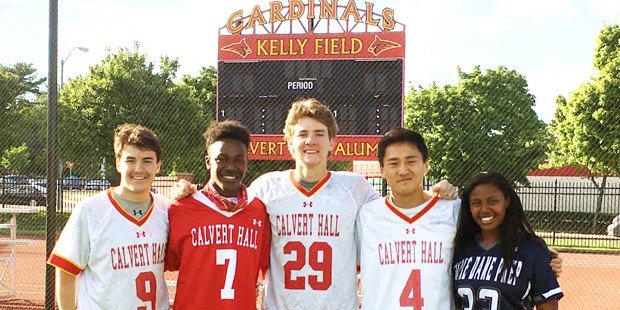 Kelly kids, who came from Asia and Africa, committed to local lacrosse tradition

There are differences between some of the kids of brothers Frank Kelly III and David Kelly and their siblings and cousins that are obvious.

Frank Kelly III’s only daughter, Jackie Lee, and his youngest son, JK, were adopted from their native Korea.

All four were adopted through Catholic Charities and were brought home through the dint of persistence and perseverance by Frank and Gayle Kelly and David and Melissa Kelly.

The parents are quick to point out that in their households, all the kids are equally cherished.

“I just can’t imagine life being any other way than having Eyasu and Gibby,” David Kelly said.

“We love all of our kids,” he said. “There’s just no difference between them.”

Yet while not actually cut from the same cloth as their biological kin, Eyasu, Gibby, JK and Jackie Lee share one characteristic with their siblings and cousins that sets the Kellys apart from most families — a long and storied history of playing lacrosse.

While all four of them had a choice of whether to take up the sport, their exposure to it made them naturally inclined to embrace the ancient American Indian game.

JK, a junior starting close defender for Calvert Hall following in his father’s footsteps to Cornell, said that he looked up to his dad and his older brothers, Frankie and Stephen, all of whom played lacrosse at Calvert Hall and Division I collegiate programs.

“I started playing when I was 6 or 7, and I liked it,” said JK, who is also a defensive back on the Cardinals’ football team.

As for choosing his dad’s college alma mater, JK said that he related to the Ivy League school’s culture.

“I could see myself going to school there, even if I didn’t play lacrosse,” he said.

His dad said that as a youngster JK always seemed to gravitate toward defense when spontaneous ‘games’ broke out in the hallways of their Lutherville home.

JK is mindful of, but not intimidated by, his role in upholding the family lacrosse legacy.

“I don’t feel like there was any pressure (to play the sport),” JK said. “It’s just fun playing with my friends and cousins.”

While Jackie Lee played briefly as a goalie at Calvert School and Garrison Forest, her father said that she was more interested in bonding with her teammates than making saves.

“At the end of the game, when teams win or lose, they rush to mob the goalie — that’s the part she liked the best,” he said. “She didn’t even know who won. It didn’t matter to her.”

Her career was short, primarily because it wasn’t her favorite endeavor.

“After the one season, she came to me and said ‘Dad, I have terrible news — I don’t like playing lacrosse,’” her dad continued. “That was absolutely fine with Gayle and I. And Jackie went on to become a high-level gymnast.”

Jackie currently attends the University of Maryland and, unsurprisingly, does not play lacrosse for the Terps.

JK and his uncle, Calvert Hall coach Bryan Kelly, are the only defensive players among the Kelly lacrosse pantheon.

Bryan was a starting defender on the 1991 University of North Carolina team that won the NCAA Division I national championship and a member of the world champion U.S. Under-19 team after graduating from Calvert Hall.

JK’s cousins, senior Mic (Denver) and sophomore Shuey are attackmen on this year’s team as they advance into the MIAA A Conference playoffs, defeating John Carroll, 19-3, in Thursday’s opening round.

JK, on the other hand, who usually draws the opponents’ top attackman, brings a competitive edge to his game with a combination of strength and athleticism that makes him one of the best close defensemen in the high-profile MIAA A Conference, according to Bryan Kelly.

“I think it could be possible that JK chose to play defense to say that ‘I’m my own man,’” the coach said. “He’s really good and really smart.”

David Kelly, who also played on a national championship team for UNC in 1986, said that Eyasu and Gibby had great mentors among their cousins and especially their brothers, Timmy and Patrick, members of Calvert Hall’s 2012 A Conference championship squad and the 2016 Carolina national champs.

Both of David’s younger kids play on their respective school’s junior varsity.

Eyasu, an attackman who scored two goals in a 9-4 win over previously unbeaten Loyola the day before the varsity upended the Dons in a thrilling season finale, also netted a buzzer-beating tying goal in an eventual 6-5 win over Boys’ Latin.

“I was just trying to find a soft spot in the defense,” Eyasu said, recounting how he was aware that the final seconds were ticking off the clock in the fourth quarter while his teammates were in transition. “I was wide open from about 10 yards, so it was catch and release. I shot it off-hip, top right. I tried to put it where the goalie isn’t.”

Despite being an accomplished lacrosse player, his father said that Eyasu might even be better at baseball.

Even so, he never wavered from his commitment to the family’s sport.

“I still like baseball and I still watch the Orioles, but it really wasn’t a difficult decision,” Eyasu said. “Because nobody I knew played baseball.”

Gibby, an attacker at Notre Dame Prep, said that she finds “friendship, joy and passion” from playing lacrosse. “That passion comes from being competitive and the family tradition. I like being part of the team and being with other people that rely on you and you have to rely on them.”

The oldest of the current Kelly crop, Mic, has made a move toward bringing the family closer together now that he has moved to attack with cousin Shuey.

“It’s awesome playing down low with Shuey,” said Mic, who had five goals and Shuey six in a recent 16-6 triumph over Severn. “Shuey’s really in his first year (because of the lost 2020 season) and he’s still learning and becoming more comfortable.”

Shuey, who scored four goals and added two assists in a 19-3 win over John Carroll in the first playoff round, said that growing up playing with Mic, Eyasu and JK, he has seen “everyone got better every year.”

He added that “Mic’s been awesome to play with and Eyasu has great hands and is a great finisher.”

Shuey added that as the Cards make their playoff push, they are starting to peak at the right time.

“Our coaches always stress that we should be playing our best in May,” he said. “That’s when we want to hit our stride.”

Pictured above: (from left) Mic, Eyasu, Shuey, JK and Gibby Kelly are the latest of a long line of Kelly cousins who have shared in the family’s lacrosse tradition.