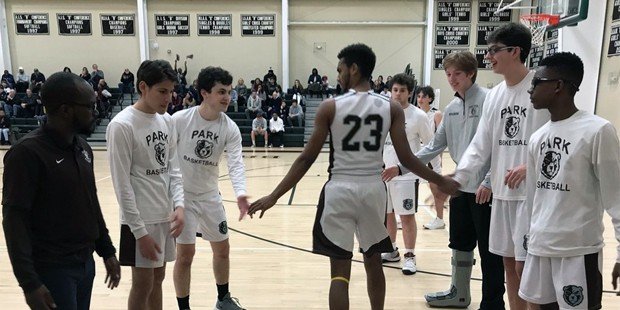 Two familiar foes squared off, Thursday in Brooklandville, with a repeat trip to the MIAA C Conference basketball finals on the line for visiting Key School, while host Park School was looking to reach its first championship game since 2006.

After seeing a 13-point lead disappear in the final three minutes of the fourth quarter, Park got some late game heroics from junior captain Ryan Adams, who gathered a defensive rebound and went coast-to-coast for what proved to be a game-winning layup, with 28 seconds to play, lifting the Bruins to a thrilling 56-54 semifinal victory.

Park now advances to Sunday’s MIAA C Conference title game against defending champion Cristo Rey, which returned to the finals with a 77-56 semifinal win over Concordia Prep, also on Thursday evening. The Bruins and Hornets, who split a pair of regular season meetings will tip-off at 1:00 p.m. on Sunday at Harford Community College’s Aberdeen Proving Grounds Federal Credit Union Arena.

Key took the early lead, getting eight first quarter points from senior Jackson Clark and building a 13-11 advantage after the opening eight minutes. The Bruins flexed their defensive muscle in the second quarter, holding the visitors to just points while racking up 16, led by senior captain Ryan Bradley, who finished with 15 points, nine rebounds and five assists.

Enter the fourth quarter, Park led 36-32, but the Bruins amped up both their offense and defense to build the double digit lead. Junior Ry Hermann ran the offense, while junior Jonah Friedman and sophomore guard Darryl France each netted a pair of clutch baskets. It wouldn’t be enough to deter a veteran-led Key squad who responded with its own defensive intensity which flustered the Bruins.

Captains Marshall Tanz, who scored 16 points, and Augie Irving, who netted 13 points, led the Key rally, while Park’s
Chima Okoro held the things down defensively for the Bruins in front of a lively crowd. Okoro finished with eight points, nine rebounds and four blocks, and Adams produced 13 points, four assists and three steals.

Jamal Lee scored 18 points to lead Cristo Rey to its victory over Concordia.