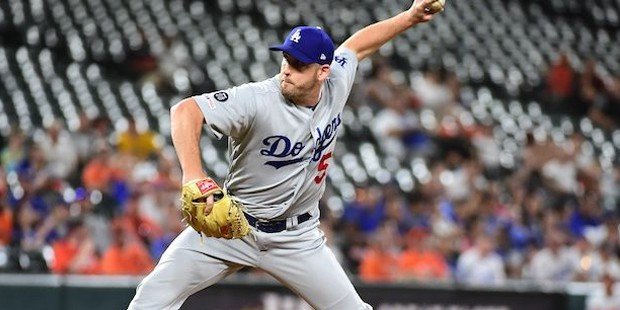 The tall, left-handed relief pitcher was 6-3 with a 4.17 ERA for the Rays through July 31 of this season, when he was traded to the Los Angeles Dodgers for outfielder Niko Hulsizer.

As an 11-year old, Adam Kolarek was photographed outside Dodger Stadium prior too an L.A. game. Now, he is key piece in a bullpen that could lead the Dodgers to a World Series in 2019.

It was a dream come true for the 2007 Catonsville grad, who pitched for three seasons at the University of Maryland, and was drafted in the 11th round of the 2010 MLB draft by the New York Mets.

The Mets released Kolarek in 2015 and he was signed by the Baltimore Orioles during the off-season, but they did not place him on their 40 man roster, thus allowing the Tamps Bay Rays to grab him.

Kolarek had two good seasons with the Rays, and he helped them during their rise to second place in the American League East, where they are well positioned to gain a playoff spot this year.

He has also been superb in 19 appearances for L.A., including their recent series this week at Oriole Park, where the Dodgers clinched the National League West on Tuesday night.

Kolarek is 2-0 with an 0.93 ERA for the Dodgers, and he worked on the mound in his hometown at Oriole Park in two games against the O’s during the three-game series.

“Every step of the way I tried to keep improving,” said Kolarek of his grinding trip through the minors. “I always focused on evaluating my progress with the goal of making it to the majors.”

Kolarek described a key adjustment that he made to his delivery when he was playing Double A ball in 2015 for the Binghamton Mets, who were managed by Pedro Lopez and the pitching coach was Glenn Abbott.

“I was shagging balls in the the outfield during batting practice one day, and throwing the ball in underhanded toward the basket at second base,” said Kolarek. “I would see how far I could throw it to the right, and bring it back to the grass. I was throwing a two-seamer from the outfield.

“I asked Glenn Abbott if I could try it from the mound during a game, and he said let’s go for it. It became my two-seamer from the mound which became a very effective pitch for me,
as a side-armer. I started throwing from a completely different angle and I began to get a lot of movement on the ball and I became very consistent with it.”

Kolarek said he hasn’t done anything any differently with the Rays or with the Dodgers since then.

“I trust my in-game mechanics and how I attack hitters and I haven’t tried to throw much harder or throw my breaking ball any differently. I know that if I do my job correctly and keep my head down that I can contribute and be successful. 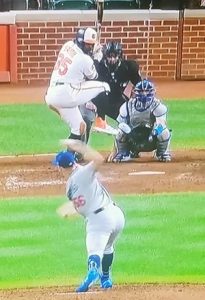 “My sinker down and in and my slider down and away has been working. The hitters see the ball coming from a different arm slot, a different angle, and it is hard for the batter to pick it up. Keeping the ball down is always important for a pitcher, and my pitch moves down naturally, so I get a lot of ground-ball outs.”

In addition to being part of the Dodgers celebration on clinching the N.L. West on Tuesday night at Oriole Park, another highlight of his pro career, now with the Dodgers, was experiencing the thrill of being able to meet legendary left-hander Sandy Koufax. Koufax was on hand recently on the night that Clayton Kershaw passed Koufax as the winningest pitcher in Dodger baseball history.

Kolarek pitched in relief in that game and he was able to shake Koufax’s hand when the Hall of Famer came in the Dodger clubhouse to hug and congratulate Kershaw after his historic accomplishment.

“It has been a whirlwind picking up and moving from Florida to California, and it was surreal meeting Sandy Koufax, who is actually what many describe as mythical.”

It’s fitting that Kolarek can experience such a dream come true after working for so many years with his father Frank, who played three years of minor league ball in the Oakland Athletic’s system and is the founder of League of Dreams, an organization that provides baseball and softball opportunities for any child or adult with physical, mental or learning disabilities, a chance to enjoy the game at clinics, or batting practice, or going to watch games.

Frank and Adam held such a clinic on Wednesday morning at Oriole Park at Camden Yards with assistance from Oriole Hall of Famer Mike Bordick and current Oriole players David Hess and Trey Mancini.

Bordick is Chairman of the Board of the League of Dreams Foundation.

“Adam has been helping me with this Foundation for the last 15 years,” said
Frank Kolarek. “This week at Camden Yards, we were able to work with the Children’s Guild, which has over 6,000 participants in schools, group homes and in foster care, and they got a chance this week for many participants to be in a big league park for one day.”

On Adam’s success with the Dodgers, his father said, “It’s always been about progress with him at any level. I knew he had the talent and I knew he would put in the work. To make it in the big leagues you must enjoy it, you have to know you are getting better, and you have to endure the ups and downs of baseball. Most importantly you have to love to play the game.

“In Catonsville, growing up, Adam was successful because he played in high school with the same core and group of players that he was with when they were the Catonsville Cubs at the 12-14 level.”

Frank Kolarek played for the legendary Walter Youse for the powerful Johnny’s baseball team at the amateur level before he became part of the Oakland A’s system. Walter Youse always said that analytics is one thing, but you got to have heart and that’s something that they can’t measure with statistics.

Coach Walter said that Adam always had the athletic ability and he consistently outworked everyone else.

“Adam had a great work ethic and I’m not surprised that he is where he is. He brings a lot to the Dodger bullpen and I wouldn’t be surprised to see him pitching this year in the World Series.”

Pictured above: Los Angeles Dodgers’ left-handed relief pitcher Adam Kolarek, a graduate of Catonsville High School, emerged as a viable major league prospect after making an adjustment to his delivery, discovered while shagging fly-balls in the outfield in 2015.