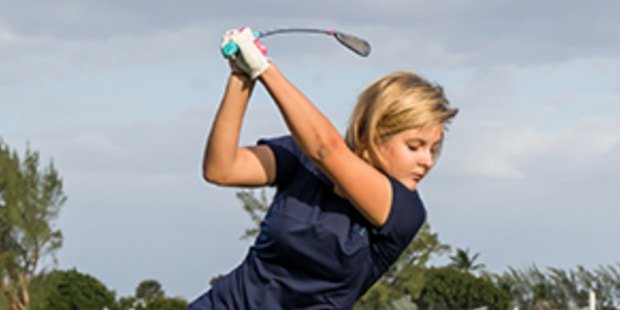 Bryn Mawr’s Paige Warren, an IAAM golf champion, has achieve her dream of earning a spot in college golf through an unmatched work ethic

Bryn Mawr’s Paige Warren spent a lot of this summer with three of her favorite things — her friends, her golf clubs and Chick-fil-A. 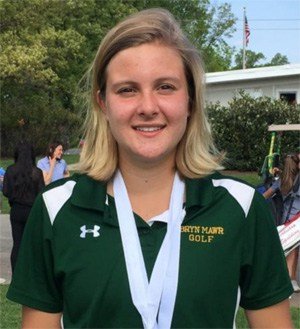 Paige Warren following her victory at the 2019 IAAM Golf Championships.

The 2019 IAAM A Conference golf champion said she felt fortunate that the COVID-19 shutdowns did not affect her sport as much as many others over the summer.

She and her friends worked on their golf games usually at her home course, Hayfields Country Club in Hunt Valley. Whenever Mawrtians teammate Julia Brinker joined her to play at Pine Ridge Golf Course, the two finished their day with a Chick-fil-A nuggets picnic at Oregon Ridge Park.

“If the course is open, I’m there all day every day,” said Warren, who also played in a tournament every week of the summer, mostly in Pennsylvania and Virginia.

Warren, a senior at Bryn Mawr, wanted to lower her scores and elevate her game for college recruiters. In early August, she shot 152 for two rounds, 75 and 77, to finish in an eighth place tie at the Terrapin Classic at the University of Maryland Golf Course.

“That was one of the highlights of my competitions this summer,” Warren said, “just because things were coming kind of close with recruiting and coaches were saying I needed lower scores. That was the first tournament where I really got some of those lower scores in and I felt good about it.”

With college golf coaches needing only a few players a year, the recruiting process was tough, Warren said, but she earned a spot at one of the top Division III programs in the country, Washington University in St. Louis.

The Bears ranked No. 2 in the Women’s Golf Coaches’ Association Division III poll in February before the pandemic wiped out the rest of the season. They had two WGCA first-team All-Americans.

Warren certainly raised her recruiting value by winning the IAAM A Conference championship as a sophomore. She shot a two-day, 18-hole total of 74 at Fox Hollow Golf Course to finish four strokes ahead of teammate and defending champion Rachel Lee.

On the second day of the tournament, Warren bogeyed the first two holes but quickly recovered. She parred the third hole, eagled the fourth and went on to shoot 36 for the round.

“I’ve never seen her fall apart in a match,” Mawrtians coach March Klein said. “She usually closes out really quickly and her closest competitor has been from our school, Rachel Lee who won it the year before her. I think for Paige (to keep growing at the next level means) to find someone to push her and still keep it fun.”

Warren, 17, didn’t start playing golf until her father signed her up for a junior summer camp when she was 12. She was the only girl there and she said none of the boys would choose her for their teams.

“I really wasn’t very good and I’m a pretty competitive person, so that kind of sparked something in me and I started to stay after camp and practice and I practiced on the weekends. Pretty soon, I was winning the long drive contest and I was like, ‘This might be something I want to do outside of camp.’”

She fell in love with the game and she fell hard. She started playing every chance she got and she progressed quickly.

“For her ability, you would never know she’s relatively new to golf,” said Klein, adding that Warren practices more than anyone she knows.

Once she started to play tournaments about three years ago, Warren set her big goal.

“I wanted to play golf in college. I wrote it on the top of my bathroom mirror in my mom’s lipstick. Every morning I got up and I looked at it and after school I’d go to the course and practice for three hours and on a weekend, all weekend long. I didn’t really have a plan or a training system, but I put so much time into it and I think if you want anything bad enough and you work hard enough, you can make it happen.”

Warren attributes her success so far to “pure grit.” She took lessons and played a lot, but this fall, she’s taking a more structured approach to training. She’s opted to continue her Bryn Mawr classes online and train every afternoon at Hayfields.

She and her coach at Hayfields use videos and performance analysis to help hone her game.

“I work really, really hard, but I haven’t always worked smart, so I think this is going to be good for me, because if I apply the same level of effort, but in a more structured program, I think I’ll see better results,” said Warren.

The pandemic canceled the 2020 IAAM season, but Warren hopes she and the Mawrtians can pick up in the spring where they left off in 2019. The team won its third straight A Conference championship and captain Warren wants to keep that streak rolling.

She’s trying to find a way to have captain’s practices and other team activities this fall. COVID-19 makes those “tricky” she said, especially with transportation, because people have different comfort levels.

“Because we are such a small team,” she said, “I think we can figure out something that works for everyone.”

Before heading back to school, Warren concluded her summer tournament schedule Labor Day weekend at the Four Winds Invitational in South Bend, Indiana, an event close to her heart. For the second year in a row, she received a tournament sponsor exemption because of her Native American heritage.

A member of the Pokagon Band of Potawatomi Indians, Warren grew up in Baltimore, but her father grew up in South Bend. Her parents met at Notre Dame. Every year, they return to the area to visit relatives and volunteer with their tribe.

“Its always an honor to represent the tribe,” said Warren. ”I was the first tribal member to play in [the Four Winds Invitational]. Every year, I want to make everyone proud and it’s a tough tournament, because it is a professional tournament. It’s from a lot farther back than I’m used to playing. It’s a tough course, but I always look forward to going out there. Both years, I’ve learned a lot by just watching how professionals go about it.”

While Warren enjoyed seeing pros up close and getting some advice, she doesn’t envision joining their ranks one day.

“I don’t think I would want to play professional golf,” Warren said. “A lot of people kind of say that of young golfers, but what drew me to college golf is that I really enjoy playing on a team in high school and it’s really hard to get that team experience because it’s an individual sport. College is a great opportunity to play golf on a team.”

Warren, who has a 95.4 academic average, plans to study mechanical engineering, but even after she graduates from college, a great day will still include her friends, her golf clubs and Chick-fil-A.

“The thing about golf is that it’s so heartbreaking sometimes,” she said. “You have good days and bad days, so you hit that really, really good shot and it has you hooked because you just want to try and do it again, but it’s such a hard game. You go out there and you have a bad day, but it kind of makes you want to do better and keep working at it. There’s always ways to improve, so I like that about it. I like a challenge and one of the most challenging things I’ve done in my life is play golf.”