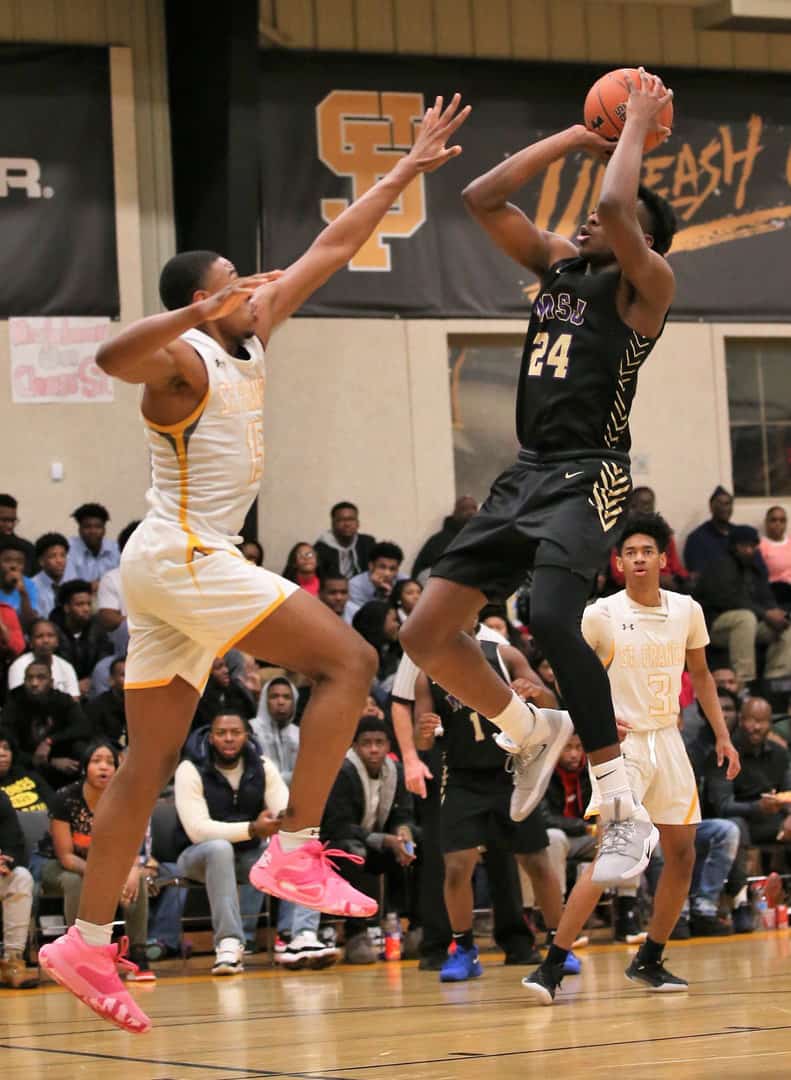 Mount St. Joseph’s Jason Edokpayi prepares to shoot as St. Frances’ Jamal West defends during Friday’s MIAA A Conference/Baltimore Catholic basketball showdown. The No. 1 Panthers rallied from a 13-point fourth quarter deficit for a 73-69 victory over the third-ranked Panthers in front of a capacity audience at Phelps Gym in East Baltimore. (photo – Jimmy Fields Sr.)

“I don’t know what be going through his head, what’s on his mind,” said Myles. “At halftime, I said ‘Ace are you alright, crack a bad joke, let me know your normal.’ When he wakes up…”

Baldwin was spellbinding for the top-ranked Panthers, who defeated No. 3 Mount St. Joseph, 73-69, inside a packed Phelps Gym in East Baltimore. Senior forward Jamal West finished with 16 points for St. Frances (33-3 overall).

The Panthers, ranked nationally by ESPN (No. 8) and MaxPreps (13th), overcame a 13-point deficit in final 5 minutes and 40 seconds of regulation to close the regular season with 12th straight victories. The win clinched the MIAA A Red Division top spot (18-1) and the Baltimore Catholic League regular season title (13-1).

They can thanks Baldwin, who scored 13 of his team-leading 18 points in the final five minutes of regulation, including a 3-pointer, giving the Panthers a 68-66 lead with 1:01 left in regulation, sending St. Frances’ faithful into a seismic-like frenzy.

It was another snapshot moment for the Virginia Commonwealth University-bound guard, who scored 11 points in the fourth quarter against then-No. 1 Poly in a 57-53 victory in front of a capacity audience at Morgan State University last month. Last year, he drained a 3-pointer at the buzzer to beat St. Maria Goretti at Loyola University, giving St. Frances its second straight BCL Tournament title.

“All the coaches tell me the fourth quarter is go-time,” said Baldwin, who sat the entire the second quarter with two fouls.

The third quarter belonged to Mount St. Joseph (24-5), which built a 10-point advantage, methodically hitting shots from the perimeter, and senior forward Jason Edokpayi (game-high 19 points) beating an aggressive West in the paint for scores. The Gaels led 63-50 after Antonio Hamlin’s dagger.

St. Frances countered with its “Ace.”

The Panthers scored 13 straight as Baldwin dropped a 3-pointer from the top of the circle over St. Joe guard Ausar Crawley, tying the game at 63 with 1:55 remaining in regulation. Hamlin silenced the crowd with another 3-pointer, giving the lead back to the visitors from West Baltimore.

Baldwin was fouled on a drive to the basket and hit two free throws with 1:31 to play. West swiped away D’Angelo Stines’ layup attempt, and Baldwin picked up the ball.

The lefty guard brought the ball downcourt and pulled up from about 20 feet. Swish.

Baldwin brought his hands, each with three fingers up, up and down as several excited fans stepped on the court.

West, who scored 12 points in the second half, knows Baldwin’s second gear all too well.

“He gets everybody involved the first half or first three quarters. The fourth quarter, he turns it up when we need it the most,” said West, who will play for South Alabama next season. “Everybody’s tired he turns up the energy and get everybody back, including himself, back in the game.”

West’s tip-in, following reserve guard Elijah Davis’ steal, extended the Panthers’ lead to 70-66 with 28 seconds left in regulation, but Mount St. Joseph wasn’t done. Hamlin, who scored 11 of his game-high 19 points in the quarter, dropped his third 3-pointer in the frame to put the Gaels down one with 18.5 seconds remaining.

West was fouled with 12.4 seconds left, and hit one of two free throws in the double bonus to make it 71-69. The Gaels got the ball to Stines for a 3-point attempt, but Julian Reese (10 points) and Khyrie Staten (14) each got a piece of the ball and West grabbed it and was fouled with 5.3 seconds left.

West converted both free throws to clinch the win. The Panthers lost to Mount St. Joseph last month at the Smith Center as the Gaels put together a spirited effort.

They played nearly flawless for 27 minutes Friday. It wasn’t enough.

“Basketball is a make or miss game,” said Myles, whose team avenged its lone area loss this season. “They hit shots and we didn’t. At the end, we hit shots and they didn’t.”

There could be a third, and maybe fourth meeting in the coming weeks as the postseason starts Tuesday with the MIAA A tourney. St. Frances hosts Glenelg Country School while the Gaels welcome St. Vincent Pallotti in opening round action.

Adrian “Ace” Baldwin (left) and Jamal West answered the call for St. Frances late in regulation Friday. Baldwin scored 13 points in the fourth including the eventual winning 3-pointer with a minute left in regulation and West had 10 of his 16 in the second half as the nationally-ranked Panthers won their 12th straight game.

The Panthers, who defeated Mount St. Joseph in last year’s MIAA A final, look to become the first to repeat since John Carroll (2012 and 2011).

“We just have to stay on the course,” said Baldwin. “Don’t let up.”