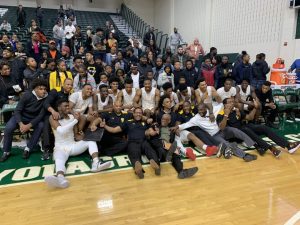 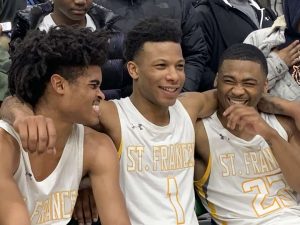 After being pulled from the bottom of the pile after hitting the winning basket in the Baltimore Catholic League Tournament final Tuesday evening at Loyola University’s Reitz Arena, St. Frances guard Adrian Baldwin grimaced as two of his teammates guided him back to the sidelines. The pained look remained as he complained his knee was hurt in the frenzy celebration, waiting on the bench for the start of the awards ceremony.

But when his mother came over and showed him her cell phone, Baldwin’s angst suddenly turned into a joyful smile. On the other end was Baldwin’s father.

The last couple of months off of the court has been difficult for “Ace,” whose father has been diagnosed with cancer. The hardwood has been Baldwin’s sanctuary, and Tuesday, he became a part of BCL lore.

His 3-pointer as time expired gave the No. 3 Panthers a 71-68 victory over St. Maria Goretti in the 48th BCL tourney final on Forbes Court. Jamal West finished with 28 points and nine rebounds for St. Frances (36-5 overall).

In repeating as BCL tourney champs, the Panthers became the first team since Mount St. Joseph to win the MIAA A Conference and BCL Tournament crowns in the same postseason. It was also the East Chase Street school’s record 9th BCL championship.

The shot was business as usual for Baldwin, who finished with 25 points and eight assists.

“Just give me the ball and make a big time play,” he said.

“The one great thing about sports is that you can use it as an outlet,” said Panthers coach Nick Myles. “His dad is going through some challenges and this is the game that his dad taught him to play. This is one of the bonds that they share.”

Baldwin made his dad proud Tuesday with one of the most memorable individual performances in the final quarter of a BCL final. He had 11 points, six assists and three steals, rallying the Panthers from a 55-47 fourth quarter deficit.

Baldwin started the stanza with a steal, made a NBA-like step move for a 3-point play. He made another steal, leading to two Jordan Toles’ free throw, pulling St. Frances even at 55 with 6:36 to play.

Goretti (28-7) regained the lead on Przemek Golek’s 3-point play, but the Panthers answered with eight straight points including an alley-oop dunk by Toles off a pass from Baldwin, and Toles finishing strong in transition for a 63-58 lead with 2:32 remaining in regulation.

“We love to win. We love championships and know we got to show up at the perfect time,” said Toles, who added 10 points and nine rebounds off the bench.

Chad Brown, who switched places with Toles in the starting lineup in the Panthers’ playoff run, was key defensively Tuesday, holding Goretti’s RJ Blakney to six second half points.

Blakney, a Baltimore native, tied the game at 66 with two free throws with 1:15 left. The Gaels got the ball back after a block from Abdou Tsimbila, but James Searcy missed a 3-pointer.

Baldwin got the long rebound and had a 2-on-1 break. He dished off to West who finished with a layup, putting St. Frances back up with 30 seconds remaining in regulation.

Rahsaan Edwards was fouled with 9.6 seconds to play and he converted two free throws, tying the game for Goretti. The Panthers inbounded the ball to senior Rajier Jones who got the ball downcourt.

He flipped the ball to a trailing Baldwin, who calmly flicked a left-handed dagger in front of St. Frances’ bench that fell through the cylinder.

The Panthers stormed the floor in celebration. Goretti, searching for its first BCL title since 2001, was stunned.

“Ace [Baldwin] is one of the best guards in the country and proved it tonight, We dealt with him on the inbounds play, but somehow, he got open and knocked down the shot,” said Gaels catch Sidney McCray. “I can’t asked anymore of my guys. I rolled with my seniors who got us here to this position.”

Blakney had 17 points for Goretti and Tsimbila posted a double-double of 15 points and 12 rebounds. After being swept by St. Frances during the regular season, the Hagerstown school was more than ready to end its title drought Tuesday.

The Gaels established a seven-point advantage before settling for a 24-18 lead after one as Golek, Tsimbila and Blakney combined for 20 of the Gaels’ 24 points.

Goretti gained its largest lead of the half, 27-18, after Golek’s 3-point play to start the second half. St. Frances pulled even at 30 with 1:11 after a Chad Brown free throw, but the Gaels regained the lead, 35-32.

The Panthers got some needed momentum as Jamal West beat the halftime buzzer, leaving them trailing just 35-34. West had 17 points in the opening half on 7-of-11 shooting.

Goretti countered at the start of the second half, pounding the ball inside to Tsimbila, who produced 8 of Goretti’s first 10 points. The Gaels had a 48-40 advantage after a 3-pointer from Matt Rogers.

The Gaels had their largest lead, 52-42, after Edwards scored his first basket and hit a free throw after making a steal. Baldwin drained 3-pointer with about 10 seconds left in the third, but Searcy answered with a dagger to close the quarter and putting the Gaels up 55-47.

St. Frances, which next plays Thursday against DeMatha Catholic in the opening round of the Alhambra Catholic Invitational Tournament at Frostburg State, is the 11th team to claim the BCL regular season and tournament championship and MIAA A title in the same season.

“This is history,” said Baldwin. “We stayed together.”