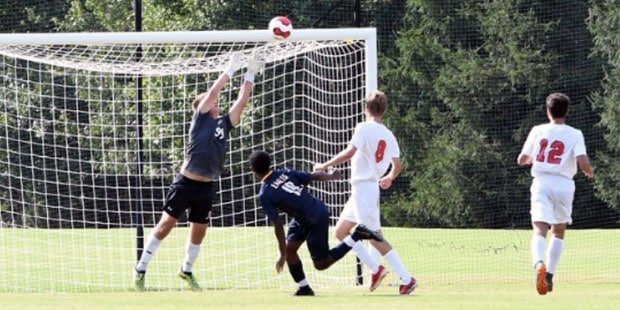 Rollins returns from injury to spark Eagles past over Spalding

After missing almost all of last season due to injury, Annapolis Area Christian School’s Jaden Rollins returned for the Eagles boys’ soccer opener, Friday, and led his team to a 2-1 victory over Archbishop Spalding.

The victory was historic for AACS as the Eagles picked up their first ever win over an MIAA A Conference squad.

Rollins played a part in both AACS goals, scoring an unassisted curler from outside the box for the first and playing a dangerous set piece for the second.

Although Spalding controlled a majority of possession, AACS proved to be potent on the break. In the first half alone, the Eagles were particularly prolific with their chances and should have seen a more comfortable halftime lead. After Rollins tallied his long-range strike, he found an open chance within the six yard box minutes later, only to hit it straight at the keeper. Luke Eberle also found a point-blank effort saved by the keeper later in the half.

The second half featured many of the same patterns as the first, with the Eagles continuing to absorb pressure and break behind the Cavalier’s back line, yet still struggling to finish. It was not until Rollins’ set piece midway through the second half that the Eagles found their second goal. Eberle turned the ball back to Anthony Coppola who fired in from close range for the second.

Spalding was able to get one back from a corner kick minutes later when Pat Turner headed home a shot. It set up an exciting finish where the Eagles were able to hold firm.

Pictured above: Annapolis Area Christian goalkeeper Jackson Hornberger rises to save a high shot in the Eagles 2-1 win over Archbishop Spalding.

Rollins returns from injury to spark a victory over Spalding