A tie with benefits 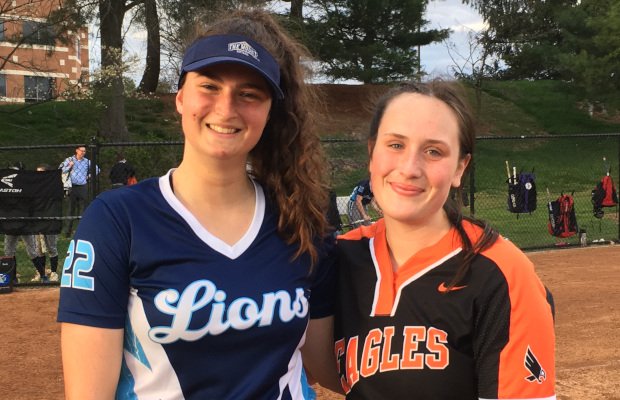 No. 6 Howard and 7th-ranked McDonogh end in a deadlock after seven innings

A battle of non-league softball rivals went down to the wire on Thursday in Owings Mills with neither No. 6 Howard nor 7th-ranked McDonogh was able to gain the final edge in the 4-4 tie.

Howard coach Chuck Rive and McDonogh skipper John Folfas agreed to the draw, considering that both squads are slated to play in holiday tournaments on Saturday. 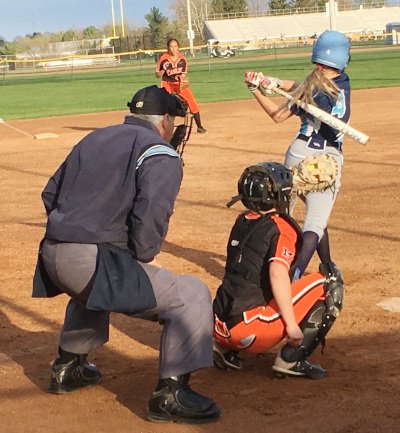 Howard right fielder Nicole Parker, who started a two-run rally in the fifth inning with an infield single, takes a healthy cut at a pitch in the seventh frame of a 4-4 tie with McDonogh on Thursday afternoon.

Moreover, a more decisive outcome would have no effect on the Lions’ standings in Howard County or on the Eagles’ fortunes in the IAAM A Conference.

“I think a tie is good for both teams,” Rice said, “It gives both of us confidence.”

“It was a good way to end it,” Folfas agreed. “We have to play two games on Saturday and I think that they’re playing three. It’s for the best.”

Moreover, both coaches were able to see how some players in new positions performed.

It was more of an emergency situation for Howard (4-0-1, 4-0 league) when starting catcher Clara O’Connor was nicked up behind the plate and had to be replaced by second baseman Morgan Gross, who showed that she was more than up for the task.

Likewise, Neera Gandhi had her first start at shortstop for McDonogh (5-1-1, 3-2) while replacing senior standout Harper Allee-Press, who was ill, and the newcomer ably held down the fort for the veteran.

With all of that in mind, the game kept fans, coaches and players in suspense for the entire seven innings of a well-played contest that was delayed for about 40 minutes by rain and a lightning alert in the Owings Mills area just before the scheduled first pitch.

Both pitchers, Howard’s Maddie Coleman and McDonogh’s Andrea Ottoman, were in complete control until the Eagles plated three runs in the third inning on a RBI single by Ottomano and a two-run double by catcher Claire Cook.

The Lions rallied in the top half of the fourth when first baseman Katie Green singled home Gross, who had also singled, and third sacker Jordan Howell, who doubled to center, to cut the Eagles’ lead to 3-2.

Coleman, a Mount St. Mary’s commit, struck out the side in the fourth and then tripled home right fielder Nicole Parker before scoring herself on an error to give the Lions their first lead, 4-3, in the bottom half of the inning.

After yielding her first walk of the game to center-fielder Taylor Moorehead and a single to Cook, Coleman buckled down to emerge unscathed from the fifth by retiring right-fielder Bella White on a come-backer. 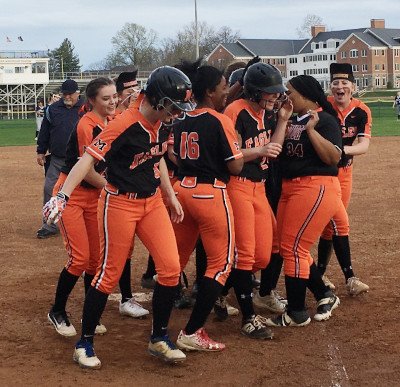 McDonogh players swarm senior Andrea Ottomano after the senior pitcher walloped a game-tying home run in the bottom of the seventh inning Thursday afternoon against Howard.

The right-hander then fanned two more Eagles and threw out another in the sixth to take the one-run lead into the final frame.

Ottomano also worked out of a jam in the top half of the seventh by getting her 12th strikeout of the game with two runners aboard before leading off the home half of the inning in a pressure-packed situation.

Her towering fly on a rise ball carried well over the center field fence for her first homer of the season to deadlock the score before Coleman whiffed her 12th batter, coaxed a fly out to center and then issued her second walk of the game.

Fortunately for Howard, an apparent stolen base was negated when the runner over-ran the bag and was tagged out to end the game in a dead heat.

Coleman and Ottomano both said that they would probably have preferred for the game to continue, although they both had strong outings with each recording a dozen K’s while allowing just a pair of walks.

Meanwhile, they both plagued each other at the plate with pivotal hits, especially Ottomano’s seventh-inning bomb.

“I threw a rise ball, and she beat me,” Coleman said with a smile as the duo posed for a postgame photo. “I should have never thrown her that pitch.”

“I was just looking for something to hit,” Ottomano said. “I was looking to make contact.”

Rice said that Coleman “missed her spot” on the fateful offering.

“Maddie’s had better stuff than she had today,” he added. “But she also hasn’t played this kind of competition that much this season.”

Folfas said he was hoping for the best when Ottomano strode to the plate.

“She had some good swings before in the game,” he said. “She was just missing the ball. I told her to look down for the ball in the zone. As soon as it got up in the air, I knew it was gone.”

Pictured above: No. 6 Howard and No. 7 McDonogh battled to. 4-4 draw Thursday afternoon in Owings Mills as Maddie Coleman (left) and her senior counterpart Andrea Ottomano both stood strong in the circle and also at the plate in the non-league contest. Both pitchers went the distance and had key hits for their respective teams.