A stunner in Roland Park 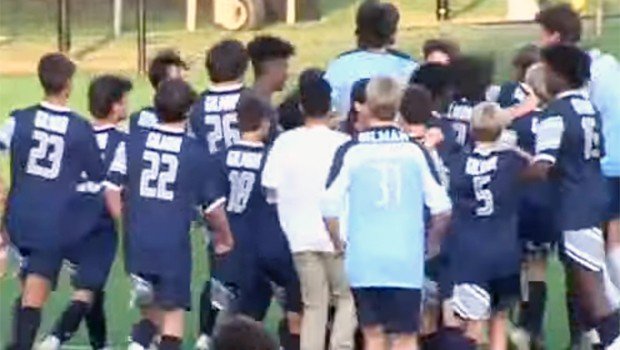 Gilman shuts down No. 1 Calvert Hall, after surrendering 8 goals to the Cardinals last month

When top-ranked Calvert Hall demolished Gilman, 8-1, back on Sept. 10th, it appeared there was not a wider gap between contending teams in the MIAA A Conference than the one that existed between the Cardinals and Greyhounds.

In the most profound turnaround of the season so far, the No. 14 Greyhounds won their rematch with the Cardinals, 1-0.

Gilman senior defender Carter Capodanno scored on a penalty kick in the first half and help anchor a defensive effort that blanked top-ranked Calvert Hall.

The only goal of the game was scored by Gilman senior captain Carter Capodanno on a first half penalty kick. Greyhound sophomore star Elijah Brijbasi drew the penalty, with 8:24 remaining in the half, when he got past the Cardinal defense and was undercut by Calvert Hall goalkeeper Nate Jones with a sliding tackle. Capodanno then beat Jones with a low shot inside the left post.

The score energized the Gilman defense, which was already doing a great job of frustrating the Cardinals. From there the Greyhounds packed it in on the defensive end and relied on several counter attacks to keep Calvert Hall honest.

“I challenged my team and they responded as well as I could have hoped,” said Gilman coach Jon Seal. “They demonstrated guts and character to win this game. Ethan Chodnicki was unbelievable in the goal for us. This was true team win and I am happy for my players.”

The result signals that the race for the MIAA A Conference title is officially wide open. Once considered the exclusive domain of Calvert Hall and No. 2 McDonogh, which remain the favorites, championship aspirations have grown among the other teams.

Gilman (8-6 overall), which had lost five of their last six coming into Wednesday’s game, improved to 7-6 in the league. They are in 6th place in league where only six teams will qualify for the post-season.

Calvert Hall (15-2-1 overall) remains in first place in the A Conference at 13-2-1, but the Cardinals no longer control their own destiny in the chase for the top seed in the conference. At 13-2 in league play, McDonogh would win the top seed if both teams were to win the rest of their games.

Up next for Gilman is a visit to No. 17 Archbishop Curley on Saturday (11:00 a.m.) in another key game in the playoff battle. The Friars, who defeated Mount St. Joseph, 4-0, on Wednesday, are currently in fifth place, one point in front of Gilman, while Concordia Prep, a 2-1 loser at John Carroll on Wednesday, is one point back of the Greyhounds.

Pictured above: The Gilman soccer team celebrates its 1-0 victory over No. 1 Calvert Hall, reversing an 8-1 loss to the Cardinals last month.