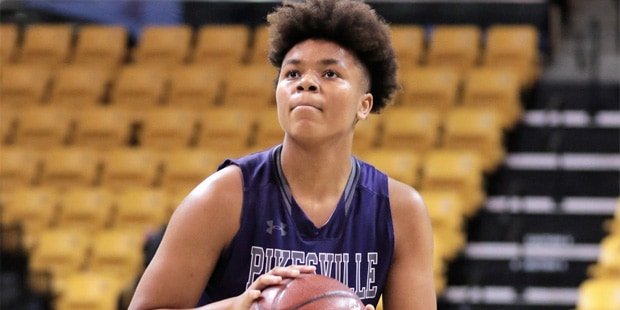 No. 7 Panthers roar past Largo in 1A state semifinals; Coppin Academy falls to Smithsburg

Thanks to Kristin Sterling, Pikesville High’s girls basketball is on the cusp of redemption.

The No. 7 Panthers advanced to the Class 1A state girls basketball title game with a 71-41 victory over Prince George’s County’s Largo in a semifinal contest at Towson University’s SECU Arena.

For the second straight year, the road ended for Coppin Academy a game short. The Eagles fell to Washington County’s Smithsburg in the other 1A Final Four contest.

Smithsburg used an effective 3-2 defensive zone, and made cerebral plays on the offensive end to secure its first state final spot since 2010. The Leopards will play Pikesville, Saturday at 6 p.m. at SECU Arena for the state championship.

Both teams struggled from the field early, but Coppin (19-6) held the early 13-10 advantage after the first. At the top of the second quarter, connected on a sweeping right-hand layup and knocked down two free throws to give the Leopards the 15-13 lead which they never relinquished.

Smithsburg began to run away in the beginning of the fourth quarter – going up by as much as 15 – as it pushed the ball in transition for back-to-back easy baskets off missed shots and turnovers by the Eagles.

“I push them, we push them, and they accept being pushed. We always pride ourselves in being the most conditioned team in our area,” Burnett said, also attributing the zone defense to the big win.

The girls came up and they let me know, ‘they’re (Coppin) huffing, they’re puffing, they’re already tired’ in the second quarter so we started pushing the tempo and get some buckets in transition.” 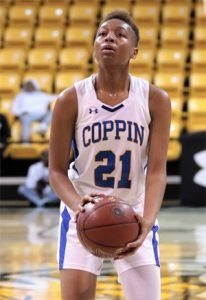 “It will be hard to swallow, but also it could be a booster,” Weaver said. “This could also be motivation for us to come back next year and get it.”

I thought our conditioning is not where it should be. We didn’t have a great preseason. And then I just thought throughout the course of the year the kids just weren’t committing to getting in better shape.”

The Eagles realized they’ll have to do a little more if they hope to take the next step.

“For me to help my team next year, I can focus on being more of a point guard and like a slasher, and not just worrying about passing and overthinking myself,” Galloway said.

I feel as though coming here two years in a row is a motivating… We played our all, we gave everything we had, but our defense is what hurt us the most. So we gotta work on transition and I gotta work on defense and helping my team get back here next year.”

A year after losing in its first state semifinal appearance, Pikesville is a win away from its crown as Sterling led all scorers with 23 points and added a game-high 10 rebounds in a surprising rout of veteran Final Four program Largo.

“I think I played good today,” said Sterling. “It was important to me because last year we lost, came short. I think we worked hard. And I thought about that a lot — how much we worked for it, how much we deserved it. And we wanted it more, so I wanted it more.”

The Panthers (22-4) showed no mercy all night, jumping out to an early 20-0 lead before Largo finally scored a layup to get on the scoreboard.

“I remember sitting here last year and a couple of these same ladies, they’re faces didn’t look the same,” said Pikesville coach Michael Dukes in reference to a season-ending loss to Southern-Garrett in last year’s 1A state semifinals.

We really raised the bar. We raised the bar early and we worked extremely hard in preseason and once practice started. So I feel like we certainly had the talent coming back to do it. It was a matter of putting it together and making sure that the girls stayed focused and I think they did a tremendous job of doing that this year.” 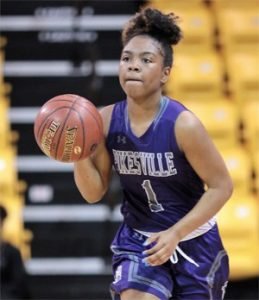 Dukes said he had the opportunity to “do a scouting report” on Largo when the Lions took on Prince George’s County rival Surrattsville in the South Region final last week. He left there with a fair assessment of how he wanted his players to defend Largo, including sharp shooter Vanessa Schwarzmann.

Schwarzmann was held to 2-of-14 shooting from the field and 1-of-9 from the three-point line.

The Panthers also attacked Largo’s frontline of 6-foot-2 Kayla Watkins Harvey and Billie Johnson (also 6-2) – both of whom had rough evenings Friday, combining for 10 points and 10 boards.

“We just walled up and really made them make shots. I thought we [had] some success,” Dukes said. “Actually we wanted to get it off and just push the tempo and really run this team.”

Before leaving the game with a minor leg cramp, Tyra Robinson made a quick series of plays that catapulted the Panthers’ momentum.

Around the midpoint of the third quarter, Robinson drove in and finished at the hoop. She turned around and stole Largo’s inbound pass for another layup, then added one more layup off another steal from a careless inbound pass – totaling three buckets in a matter of only six seconds.

It helped Pikesville’s lead swell from 21 at the half to 31 at the end of the third.

“At that moment I didn’t really know how many steals I had gotten. I think I had got a layup, and the opportunity really itself when they were inbounding the ball and made a bad pass,” said Robinson, who finished with 14 points, five rebounds and three steals.

I was right by the hoop so I made the layup, and I helped defense, and I got another steal and made a layup. I really do feel like that point in the game gave us a lot of momentum.”

Pictured above: Kristen Sterling, poured in a game-high 23 points for Pikesville, eyes a free throw attempt in the Panthers 1A state semifinal win over Largo. (Photo courtesy of Jimmy Fields, Jr.)

at SECU Arena at Towson University