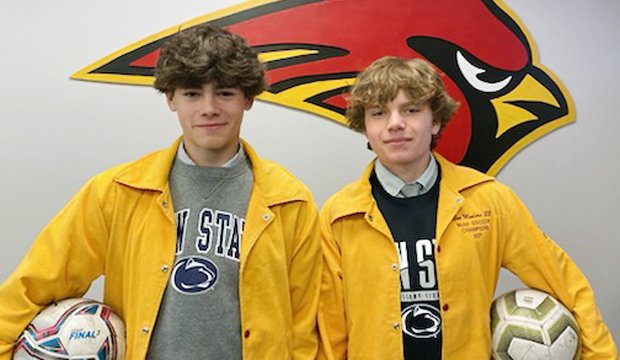 Calvert Hall soccer stars Tyler Flynn and Ben Madore have played together since they were six; and now they have committed to continue their careers together at Penn State

The journey from rec. soccer to a Division I opportunity is long and arduous.

Long nights on the practice field, countless miles traveling to out of state tournaments and family sacrifices of precious time and treasure, are all part of the process required to form a talented young player into an athlete capable of competing on the highest level of collegiate soccer.

By all accounts, as many as eight players from Calvert Hall’s 2021 MIAA A Conference championship squad could play Division I college soccer. That’s eight players who are making similar journeys and the first two to have reached the pinnacle, with a commitment to a D1 program, have done it virtually side-by-side.

Cardinals juniors Ben Madore and Tyler Flynn first met when they were six years old playing for the Pipeline Soccer Club. Each hails from Harford County and they have also been teammates with the D.C. United and the Baltimore Armour academy programs, as well as at Calvert Hall, where they have started since their freshmen years.

With their final high school season upcoming in the fall, they have made their plans for the future and, once again, they will do it together, as both recently announced they will accept scholarships to play in the Big 10 Conference at Penn State University.

“Tyler and I have been playing soccer with each other since I was six years old and he has become one of my best friends,” said Madore, who has 11 goals and 12 assists thus far in his high school career, while serving as the Cardinals’ point man in the middle. “He is a great player and we push each other on and off the field. He has been there from the start and I can’t wait to play with him at Penn State.” 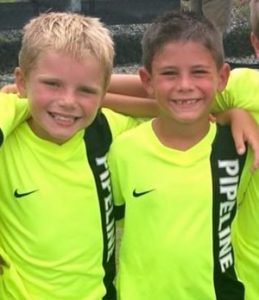 Ben Madore (left) and Tyler Flynn have been playing together, for various teams, including Calvert Hall, since Ben was six and Tyler was seven. Now, they have made the commitment to play together in college, on the Division I level, at Penn State University.

According to Flynn, who has scored 14 goals and delivered 11 assists at Calvert Hall, the relationship has extended beyond the players to their families.

“Our friendship grew over the years and we got a lot closer,” said Flynn. “Our families always carpooled together and we would go on lots of trips playing in tournaments all over the U.S. Going to Calvert Hall and playing high school soccer has brought us even closer. Ben and I push each other to become better players all the time, whether it is in practice games or even when we go and play pickup with our friends. Ben and I are so comfortable playing soccer together that when we are both on the field, we make each other better players. We are both excited to start this new chapter of our lives at Penn State.”

“Ben is a very skilled attacking player,” said Calvert Hall head coach Rich Zinkand. “He is very effective going at defenders 1-v-1 and getting into the attacking third. He shows up in important moments by way of his four game winning goals.

“It was obvious from the day Ty started at Calvert Hall that he is always looking to attack and get to the goal. He has never been hesitant to take on any defender. Any Coach loves players like Tyler, players with that mind set. Tyler has a habit of coming up big when the team needs him.”

Zinkand also believes Flynn and Madore will have an edge when they head to Happy Valley.

“I think playing together gives them an advantage,” said Zinkand, who has led the Cardinals to two MIAA A Conference titles. “Ben and Ty know each other’s tendencies and they will be able to push each other to play their best. Penn State is a highly successful program and Coach Cook sees that both Ben and Tyler have the potential to keep their program on top. They both will need to continue to work hard and adjust to the strength and the speed of play of the college game. I have no doubt that they will continue to do so in order to be successful at Penn State.”

As for the players, the Nittany Lions offered the best fit.

“Penn State is the best place for me to continue both my education and my soccer career,” said Madore. “It is a great school with great people. It has an amazing soccer program that will push my game to the limit. The coaches and teammates will teach me how to be a better player and person, and offer me the support I need to succeed. Penn State feels like home and I can’t wait to start.”

Just as both feel Penn State is the best place to help them achieve their future goals, Flynn and Madore believe that Calvert Hall helped bring them to this point.

“Calvert Hall has shaped me to be a better player by teaching me brotherhood, which has helped me become a better team player,” stated Flynn. “As a person, Calvert Hall has taught me to lead by example, to work hard, be the best version of myself, on and off the field, and to stay humble.”

“Calvert Hall is a great academic school that has been preparing me for the next steps in my life,” Madore reflected. “It has taught me to be responsible and to be a man of integrity. As a player, I have learned a lot. The coaches are some of the best I’ve had because of the support they give me. They always want the best for their players. My goals for this upcoming season are to go undefeated, and to win another MIAA championship.”

“Tyler and Ben have really matured in their time at Calvert Hall,” added Zinkand. “Both are very good students who are well respected by faculty and fellow students. It has been really gratifying watching Ben and Tyler represent the Calvert Hall Soccer program on the field, in the classroom, and in the community.

“I am really excited for both Ty and Ben on their commitment to Penn State. Their commitment is a result of all the hard work they have put in. They have earned the chance to play college soccer at the Division I level.” 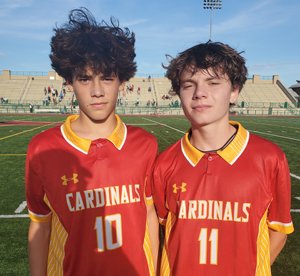 Heading into his senior year, Flynn hopes to serve as a team captain and help lead the Cardinals to another championship while continuing to grow as a player, technically and physically. Madore also wants to upgrade his physicality during his senior year while focusing on becoming a better defender. He has also set the goals of winning another title and going undefeated.

Of course neither player could be where they are without the support of their families.

“I have a lot of people that have influenced me throughout my journey, but the main people are my family,” said Madore. “They have been supporting me through the ups and downs in my (soccer) career. They want me to succeed in anything I try to accomplish. They push me to the limit. They want the best for me and are always there when I need them.”

“The major influences throughout my life and soccer career have always been my parents,” said Flynn. “They have always supported me along this journey and have sacrificed many things for me. My parents have spent many hours driving me to games and practices, which is a huge sacrifice for them. I appreciate it a lot.”

Another major influence for both players is former teammate Ben Bender, a 2020 Calvert Hall graduate who was a senior when Madore and Flynn were freshmen. Bender went on to become an All-American at the University of Maryland before being selected No. 1 overall in the Major League Soccer Draft by Charlotte FC in February. He recently scored his first professional goal and is setting an example for what is possible for younger players from the Baltimore area.

“I feel that I have similar opportunities in my future as Ben Bender had,” said Flynn, who would pursue a career in business if he cannot earn a living playing soccer. “Playing with Ben Bender my freshman year at Calvert Hall helped me grow as a player. Ben Bender taught me many things about the game and he was a great role model for me. I believe if I follow in his footsteps and work as hard as he did, I would have similar opportunities to make it to the MLS.”

“When I was a freshman, Ben Bender was a great role model and really taught me a lot,” said Madore, who plans to pursue a career in either sports management or business management. “He taught me to be focused and to train my hardest every session. He takes no days off and that’s why he is where he is today. My goals are similar to his and I want to play at a professional level like him.”

Although the odds are long, should Madore and Flynn both earn the opportunity to play professional soccer, you should not bet against them doing it together, possibly on the same team.

Pictured above: Tyler Flynn (left) and Ben Madore will continue their shared soccer journeys, which began at the age of six, by playing Division I soccer together at Penn State University after completing their senior years at Calvert Hall. (Photo courtesy of Nichole Regulski)