Chesapeake-Anne Arundel High’s baseball team returned to Ripken Stadium Saturday, determined to exorcised the memories of an epic collapse in the Class 3A state final a year earlier.

By early Sunday morning, the No. 4 Cougars left the Aberdeen field with another bitter disappointment. Montgomery County’s Poolesvile defeated Chesapeake, 4-3, in the final. Fallston’s bid for a title was revoked by Middletown of Frederick County, 8-0, in the 2A title match.

For the first time since 2012, the Baltimore area didn’t win a state title. Howard lost to Northwest from Montgomery County in the 4A finale Friday evening at Ripken. There wasn’t an area team in the 1A final, played early Saturday afternoon at Ripken.

Heavy rain in the mid-afternoon left the uncovered infield at Ripken with several puddles, delaying the remainder of Championship Saturday for three hours. It would be the longest of evenings for the locals.

Middletown captured its first state championship behind junior Matt Dillard, who threw a five-hitter and struck out 11. Robbie Houck, Jacob House and Andrew Wenner each had two hits and two RBI for the Knights (21-4 overall).

The Cougars (16-8), who scored 18 runs in Tuesday’s state semifinal win over Eastern Tech, were shutout for the first time this season.

“Our batting lineup really came alive for our playoff run and continue to put good at-bats together and just grind teams down,” said Fallston coach Grant Morlock. “We couldn’t get that done tonight, but that’s OK, I don’t want this to be a reflection of our season.”

Fallston mounted its only threat in the top of third, getting one-out singles from Blake Loewe and Everett Cox. Kyle Hoover’s shallow fly ball into leftfield turned into a fielder’s choice (Loewe forced out at third) and Noah Hagenston struck out.

Middletown broke through in the bottom half of the third against Cougar starter Bryce Logan, who struck out four through the first two innings. House lined a single past a drawn-in infield, scoring two runs.

Houck had a RBI single, and in the fifth, added a sacrifice fly as Knights led 5-0. Wenner had a two-run in a three-run sixth, putting the game out of reach.

Cox and Brady Logan each finished 2-for-3 for Fallston, which ran off six straight to reach its first state final since 2009.

“Once playoffs started, everything clicked,” said Bryce Logan. “We were hitting the ball well, but tonight, we couldn’t hit anything.”

“I’m just proud of our boys, if you would have told us this, the beginning of April, we’d be standing here a state runner up on May 27th, I’d say you’re crazy,” said Morlock, “but these guys worked their tails off all year and I’m just proud of all they’ve accomplished.”

After a gut-wrenching come-in-front loss in 2016, Chesapeake-Anne Arundel was unable to complete a stirring comeback against Poolesville in a game that started shortly before 10 p.m. Once down 4-0, the Cougars from Pasadena had the tying run at third base in the bottom of the seventh.

Poolesville (18-2), courtesy of two-run single from Brady Pearre in the first and Colin Metz’s two-run double in the fourth, led 4-0. The Cougars began their rally in the fifth as senior Tommy McNamara singled home Colton Spangler and Blake Rebstock hustled to the plate following an overthrow.

McNamara later cross home plate on a wild pitch, making it an one-run contest. McNamara opened the seventh with a single and his courtesy runner advanced on Bobby Quesenberry’s two-out single. 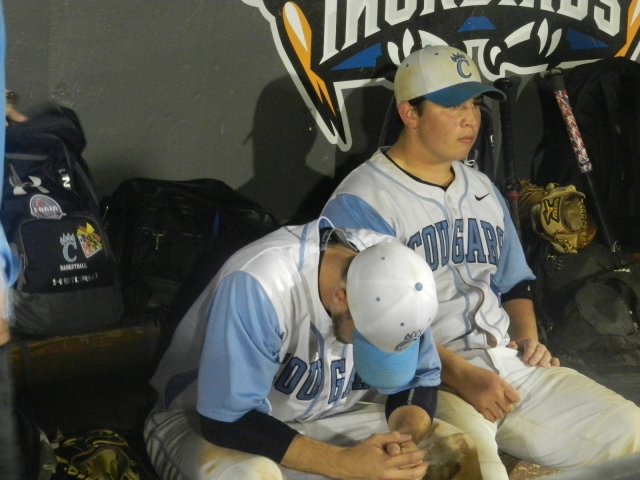 The Cougars weren’t able to get redemption, leaving 10 runners in scoring position Saturday. Chesapeake twice had the bases loaded.

“We had a lot of opportunities,” said King. “Sometimes that moment just jumps up on you. You don’t get to feel it all the time, so it’s new and you tighten up a little bit.”

Chesapeake will have its top two pitchers among eight returning letterwinners back for another run in 2018. The Cougars lost three close matches to Anne Arundel County champ and 4A state semifinalist Severna Park this spring.

“We were very young and very talented. I’m telling you this team is going to be back here next year and the year after that,” said Oxyer, one of five seniors. “They’re not leaving here without a ring.”