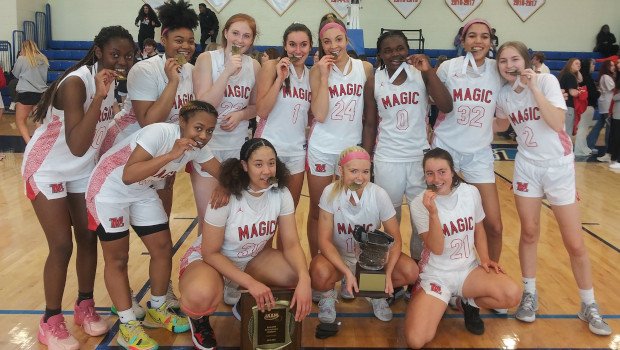 After a close first quarter in Monday’s IAAM B2 Conference basketball championship, Mercy’s players wanted to switch their defense. Coach Mary Ella Marion agreed and the Magic set off on a huge run that sparked them to their first IAAM basketball title, 67-34, over Concordia Prep.

Freshman point guard Milan Brown finished with 26 points and junior guard and team captain Olivia Liszt had 15 as Mercy (21-1) won its first basketball championship in 25 years. The Magic had not won since 1997, the last of their four Catholic League titles.

This winter, however, they’ve built one of the best seasons in program history. The Magic, which posted its first winning record in a decade two years ago before COVID-19 wiped out last season’s tournament, hasn’t had a record like this since that 1997 season when they finished 25-3.

For the Magic’s lone senior, guard Taylor Gilmore, the championship comes with a lot of emotion.

“It’s been very overwhelming,” Gilmore said, “because I’ve never been in this type of a situation before. We had a whole lot of good talent this year and we worked hard throughout the season and finished strong… It’s kind of hard to walk away, but at the same time, I can walk out with a bang.”

The top-seeded Magic swept through the B2 Conference with just three close games, two against second-seeded Gerstell Academy and one against third-seeded Concordia, which was also aiming for its first IAAM basketball title.

The Saints (16-8), who upset Gerstell in the semifinals, stayed with the Magic through the first quarter as neither team led by more than four. Concordia took its only lead of the game, 7-6, on a Phoebe Bannon free throw after Gabby Smelcer’s baseline jumper tied the game at 6.

Brown tied it again with a free throw 10 seconds later to start a Mercy run that exploded with the change in defense in the second quarter. The Magic used a 23-6 run to take a 29-13 lead by haltime.

“We switched from the 1-3-1 to the 2-2-1 and that’s kind of our specialty,” Liszt said. “We always bring an energy with that defense and I think that changed the game.”

In their first meeting of the season, the Saints handled that press and forced overtime before Mercy prevailed 64-63. The title game, however, was much more like the second meeting when Mercy rolled, 70-26.

Monday, the Magic outscored the Saints 12-2 to open the second quarter. In the first two minutes, they forced three Concordia turnovers and scored on all of them, including a long 3-pointer from Liszt that provided a jolt for Mercy’s offense. Brown followed with a baseline jumper for an 18-7 lead.

Concordia’s Hailee Ford, who led the Saints with 11 points, stalled Mercy’s charge but not for long. Anabelle Hafner hit a free throw and Gilmore converted one of her four steals in the quarter into a driving layup to push the lead to 21-9.

Later in the quarter, Brown took over, hitting a 3-pointer, taking a defensive rebound and driving for a layup and then feeding Lizst with a no-look pass inside after a steal. That boosted Mercy’s lead to 29-11 and they kept rolling into the third quarter.

“Sometimes it’s hard to start games off with energy,” Brown said. “It wasn’t a bad start, but it wasn’t as good as we wanted and we knew in the second half of the championship we had to bring it and we did.”

While the Saints conclude their season, Mercy has one more game left.

The Magic will face Maryvale Prep in the The Classic, which officials from both schools hope will build into a tradition to match the 54-year basketball rivalry Mercy enjoyed with IND. The Game, which drew the largest crowds for any girls high school sporting event in Maryland, ended when IND close its doors in 2020.

Mercy and Maryvale will try to revive that excitement beginning Friday night at 7:30 at Towson University’s SECU Arena.