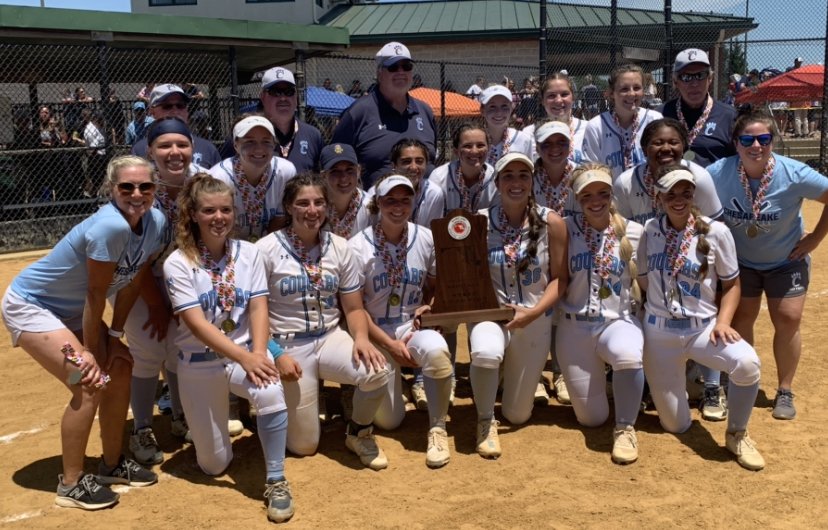 After the initial wave of celebration and the awards ceremony, following Chesapeake-Anne Arundel High’s 3-1 victory over Reservoir in the Class 3A state softball hampionship game, Friday morning at Bachman Park in Glen Burnie, Chesapeake’s senior pitching ace Jerzie Nutile was a wounded warrior.

Sitting with her teammates, Nutile had a big ice pack which she alternated between her right shoulder and right kneecap, off of which she deflected a wicked line drive in the second inning.

The Chesapeake Cougars all grasp for a piece of the 3A state championship trophy after their 3-1 win over Reservoir in the title game.

The ball, off the bat of Reservoir catcher Kayla Ecker, was struck so hard that it ricocheted, on a fly, to Cougar third-baseman Allison Pollack, for the second out of the inning. Nutile never reacted to any pain she may have been feeling and greeted veteran Chesapeake coach Don Ellenberger with a definitive statement as went to the circle to check on her well being.

For his own validation, Ellenberger made Nutile hurl a few warmup pitches before allowing her to resume pursuit of her mission. Nutile retired the next batter on an infield grounder to complete two perfect innings of work and she would carry the perfect game into the sixth inning, with a 3-0 lead, before Madison Granzow broke it up with a two out line single to left. Maggie Frisvold followed with a solid single to right for the Gators, who were suddenly in business. Nutile, however, responded with a strikeout of Alyssa Kelly to end the threat.

The Gators (15-1) applied even more pressure in the seventh and even broke up the shutout, as Courtney Johnson reached on a infield error. Mia McGrath came on to pinch run and she moved to second on a wild pitch and came around to score on consecutive infield groundouts. With two outs and no one on, Nutile closed the door for good on the Gators, striking out her pitching opponent, Kylee Gunkel, for her ninth K and the final out of the ball game, setting off a celebration for the Cougars.

“It hurt,” Nutile admitted of the line drive to her knee. “I’m still hurting all around, but when I am in this game, I’m in it for my team. I’m not giving up, no matter what. If I get hit in the head I am still playing.”

Gunkel tossed a strong game for Reservoir, but the Cougars (15-1) strung together some hits at the right times to build their lead.

Chesapeake broke on top in the second inning when junior Norah Hart lined a one-out triple off the fence in left-center field, just beyond a lunging attempt by Kelly, the Gators’ left-fielder. Junior Kaitlyn Young followed with a single to left, scoring Hart with the first run of the game.

The Cougars added their final two runs in the fifth, as a catcher Sam Larkin continued a post-season power surge with a two-run home run. The blast came after freshman Alana Watts (2-for-2 with a sac bunt) reached base with a two-out single. Larkin, who singled to the opposite field in her first at bat and went 2-for-3 on the day, turned on the first pitch she saw, an inside offering from Gunkel, and drove it high and deep down the right-field line for the round-tripper.

“My first two at bats, (the pitches) were all outside, so I was just expecting to drive the ball to left field and get a line drive base hit,” said Larkin. “But, she threw me inside and I am going to take my opportunity and hit the ball. It felt really good. It was just excitement.”

The blast, which Nutile said she predicted to one of the Chesapeake assistant coaches, gave the Cougars’ ace some much appreciated breathing room.

“I said, ‘She is going to hit this ball over the fence. I know it for a fact. This is her pitcher’ and whoops, there it went,” exclaimed Nutile, who will playing at Longwood University in Virginia next fall. “As soon as she did it, I knew in my heart, that’s it. That was it right there.”

Nutile also expressed the pure joy she was experiencing with winning a high school state championship.

“To have this team, I am so grateful,” she said. “They made so many sacrifices for me. They missed so much stuff. I missed my prom, I almost missed my graduation, I missed my senior week. We were in it to win it and we did it. I am so, so glad we stuck to it and this is just an unbelievable feeling.”

It was the eighth state softball title for Chesapeake, but their first since 2008. It was the third crown for the Cougars during the 20-year tenure of Ellenberger, who has guided Chesapeake to nine state title game appearances.

“Obviously you love winning,” said Ellenberger. “I’m more happy for my players because they are the ones who really do it. It’s been a while since we had a (championship) win and the girls pulled it off. They came from behind in two of the three (playoff) games and my catcher Sam (Larkin) keeps finding a way to hit home runs. It’s tremendous.”

Ellenberger gave credit where credit was due, to the dedication and leadership of Nutile.

“Two years ago we lost to Huntingtown (in the final) and Jerzie wasn’t pitching, she was our shortstop,” he said. “Last year she didn’t get to be the No. 1 because we didn’t play. This year she came in extra motivated and told me, ‘Coach, I’m not leaving here without that title.’ I told her, ‘you have to work hard and you have to get this team behind you because we are young.’ She worked everybody hard in practice and got on people.

“Jerzie is Jerzie. She’s going to come out and give you 100% every second. That’s what she’s done.”

“We knew this was going to be a tough game,” said Frisvold. “Chesapeake is always a formidable competitor and we knew their pitcher is incredibly talented. The fact that the girls came through in the sixth and seventh innings, to put runners on base, and then to score in the seventh, shows the resilience of this young team.

“Losing last season (to the COVID-19 pandemic) was heart-breaking for everyone, especially this team. It would have been virtually the same team. It was one of those things where we wanted to leave it all on the field this season and the girls never skipped a beat when I asked them to prioritize high school softball for this spring.”

Pictured above: Chesapeake-Anne Arundel senior pitcher Jerzie Nutile throws up her arms in celebration after getting her ninth strikeout Friday for the final out in the Cougars’  3-1 win over Reservoir for the Class 3A state softball championship.