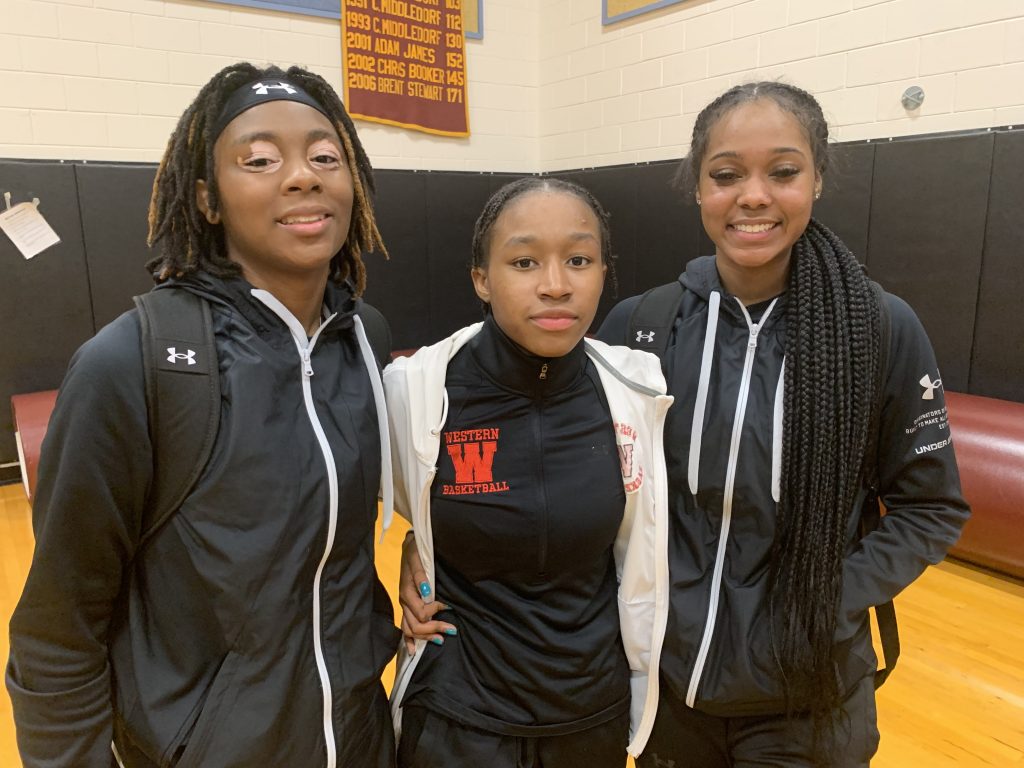 One to go: Western seniors Gabby Johnson, Ny’Ceara Pryor and Korteni McMurray are a win away from a state title. The No. 3 Doves advanced to the Class 4A state title game with a 61-46 victory over previously undefeated and fifth-ranked Glen Burnie in a state 4A final four contest at Paint Branch in Montgomery County..

Western High basketball seniors Ny’Ceara Pryor, Gabby Johnson and Kortnei McMurray have been trying to finish something they started three years ago.

Guards Pryor and Johnson combined for 42 points as the No. 3 Doves ran past No. 5 Glen Burnie, 61-46, in the Class 4A semifinals Tuesday night at Paint Branch High School in Burtonsville.

Western (19-2 overall) will meet Clarksburg (24-0) for the title Friday at 8:00 p.m. at the Xfinity Center at the University of Maryland. The Montgomery County champion Coyotes defeated Prince George’s County’s Charles H. Flowers, 53-35, in the other 4A semifinal Tuesday night.

“We kind of manifested this,” said McMurray, adding that the Doves had a few more challenges as freshmen. “Now that we have more experience with our four years, we grew into playing with each other, so we know what we want and we’re going to go for what we want.”

With just seven players on the team, coach Tasha Townsend’s Doves play like a tight-knit group and that made all the difference against the previously-undefeated Gophers, who were in the midst of the best season in program history.

The Baltimore City champions scored the first nine points of the game and Glen Burnie (22-1) never got closer than six. The quicker Doves like to drive and they took advantage of Glen Burnie’s loose defense, taking it to the hoop or dishing to an open player underneath. Fifteen of the Doves’ 24 field goals were assisted and almost all were layups.

Glen Burnie, the Anne Arundel County champion, struggled with its offense and never really settled although versatile junior guard Amourie Porter scored 28 points. Every time the momentum appeared to swing the Gophers’ way, the Doves answered with a run.

Early in the fourth quarter, Porter nailed a long 3-pointer to cut the Doves’ lead to 42-36, but they could not maintain the momentum. The Doves scored the next eight points, all on layups. The last three came off Glen Burnie turnovers.

The 6-2 Coit scored the first two baskets in the run off feeds from McMurray and Pryor. Johnson then converted Pryor’s steal and seconds later, snatched the ball off the Gophers’ inbound pass and laid it in. The Doves led 50-36 with 4:41 left in the game, snuffing out Glen Burnie’s comeback hopes.

Gophers coach Sam Porter said his team wasn’t “mentally there” and that they suffered from state semifinal jitters.

“It showed on the court and then you can’t take anything away from that team there, Western — seven players, seven dogs. They fight, and we wasn’t mentally ready as a team. Some players were individually, but when you get to this stage it has to be a unit and it wasn’t a unit today, but I can assure you this won’t be the last time,” said Porter, in his first season coaching his daughter’s team.

Just three years ago, the Gophers did not win a game. This winter, they won their first Anne Arundel County championship and posted the best record in program history. The No. 1 seed in Class 4A, the Gophers had only been to the state tournament once before, in 1983.

Despite the loss on the scoreboard, he said, this season was a win in a lot of ways.

“Like I told the girls, we won,” Porter said. “We weren’t supposed to be here and everyone pretty much checked us off. We get here. Everything we’ve done is just icing on the cake. We haven’t been here before… We had some big goals met. Now they got a taste of it and now we’re going to see how hungry [they] are.”

For the Doves, that hunger has been around for three years and if they win the state title, a photo of their team perhaps will join two huge photos hanging on the walls of their gym — the two most successful Western basketball teams.

“They definitely did leave a legacy and when we come back, we want to have our legacy up there as well,” Pryor said. “This is a team of seven, so when we see our banner up there, we be like, ‘That’s the team of seven that we had and we wind up winning the state championship,’ so I think that’s very important, for us to look and see all the achievements that Western has had, and we’re going to give them another.”