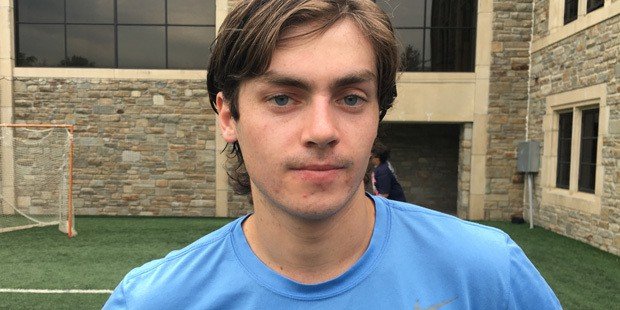 Despite injury, senior captain scores four times to help the Dons come from behind in MIAA A quarterfinal (VIDEO HERE!)

Despite a dislocated shoulder suffered early in the second quarter, Loyola Blakefield senior captain Liam Bateman, after having the joint popped back in place, showed tremendous courage in rallying his Dons to a 10-8 come-from-behind victory over a tenacious Severn School squad in an MIAA A Conference quarterfinal game, Friday at Blakefield.

The victory sets up a much anticipate rematch with arch-rival Calvert Hall, on Tuesday, in the MIAA A Conference lacrosse semifinals at Towson University’s Johnny Unitas Stadium. The Loyola/Calvert Hall rematch will face-off at approximately 7:30 p.m. on Tuesday. It is part of a semifinal double-header and the first game (5:00 p.m.), will feature top-seeded McDonogh facing fourth-seeded Boys’ Latin, which advanced with an 11-5 win over St. Mary’s on Friday.

The visiting Admirals sailed into Towson on Friday afternoon and quickly jumped out to a 3-0 lead on the home-standing Dons. The sixth-seeded Severn squad displayed incredible athleticism, hustle and skill as they controlled the X, gobbled up ground balls, and held possession for a huge chunk of the first quarter.

Junior midfielder Henry Rentz got the Admirals on the board first, with an unassisted left-handed gem with only 1:40 elapsed in the first quarter. Sophomore attackman Collin Ervin and junior Kain Domenech each scored unassisted goals, and the Admirals had the Dons on their heels, leading 3-0 after one quarter.

When Bateman hobbled off the field with his injured shoulder, third year Loyola head coach Ben Rubeor called a timeout with 9:13 left in the second quarter to calmly rally his troops. Rubeor stressed the importance of teamwork and passion, and the Dons responded with four straight goals to grab a 4-3 lead to restore order.

Using a lightning fast cutting and passing game, sophomore midfielder Chase Llewellyn grabbed a nifty feed from fellow sophomore Jack Koras to unleash a missile and finally get the Dons on the board, but they still trailed, 3-1, with 7:53 remaining in the second quarter. Senior attackmen Ryan Dunn and Conner Hume tallied back-to-back unassisted goals to pull the Dons even at 3-3 with 5:33 left in the first half.

Senior captain Alex Reid unleashed an overhand rocket that found the back of the net, and Loyola breathed a sigh of relief as they pulled ahead 4-3 with 3:06 remaining in the half. Severn senior attackman and captain Dylan Gergar answered with a blistering shot from the top of the alley to even the score at 4-4 to end the first half.

With his injured shoulder now popped back into place, the Dons’ Bateman used his left handed power to score the first of his team leading four goals to put the Dons on top for good, 5-4 with 10:44 left in the third quarter. Loyola senior attackman Conner Hume then used assists from Dunn and sophomore middie Jack Koras to score two straight goals, and just like that, the Dons had turned a 3-0 deficit into a 7-4 advantage.

Severn junior Jon Jarosz used a pinpoint feed from Gergar, and unleashed an incredible jump shot to pull the Admirals back into the game at 7-5 with 2:05 left in the third.

When the curtain rose for the fourth quarter it was time for the Bateman show. The Loyola Maryland commit used his overpowering left-handed prowess to score three straight goals to put the Dons up 10-5 halfway through the fourth quarter.

Just like they did to open the first stanza, the talented Admirals scored three straight goals again to pull to within 10-8, but it was too little, and too late to catch the Dons. Rubeor, in his last year as the Loyola’s head coach was relieved that his squad rallied to extend his Loyola stay to at least one more game.

“Hopefully, in the next few days we will figure out how to start a little faster, and finish a little smarter,” said Rubeor, who gave credit to his defense for bringing the Dons back from the first quarter hole they dug for themselves. “Our defense, they are a tight-knit group and have worked hard all year. When Severn did get off some quality shots, I thought that our goalie Brighton Lorber made some great saves.”

Rubeor also praised Bateman for his determination and effort. “I think Liam is one heck of a player, and sometimes does not get the credit that he deserves. But he realizes it’s all about the collective group and not the individuals.”

Bateman described the teams attitude going into the do or die game.

“We knew we had to work really hard and grab every possible ground ball,” said Bateman. “We also knew that we did not want this to be Coach’s last game. We were all thinking about it. We were determined to win this one for Coach and for ourselves.”

Pictured above: Loyola’s Liam Bateman, despite dislocating his shoulder in the second quarter, returned to score four goals and rally the Dons to a 10-8 win over Severn in the MIAA A Conference lacrosse quarterfinals.