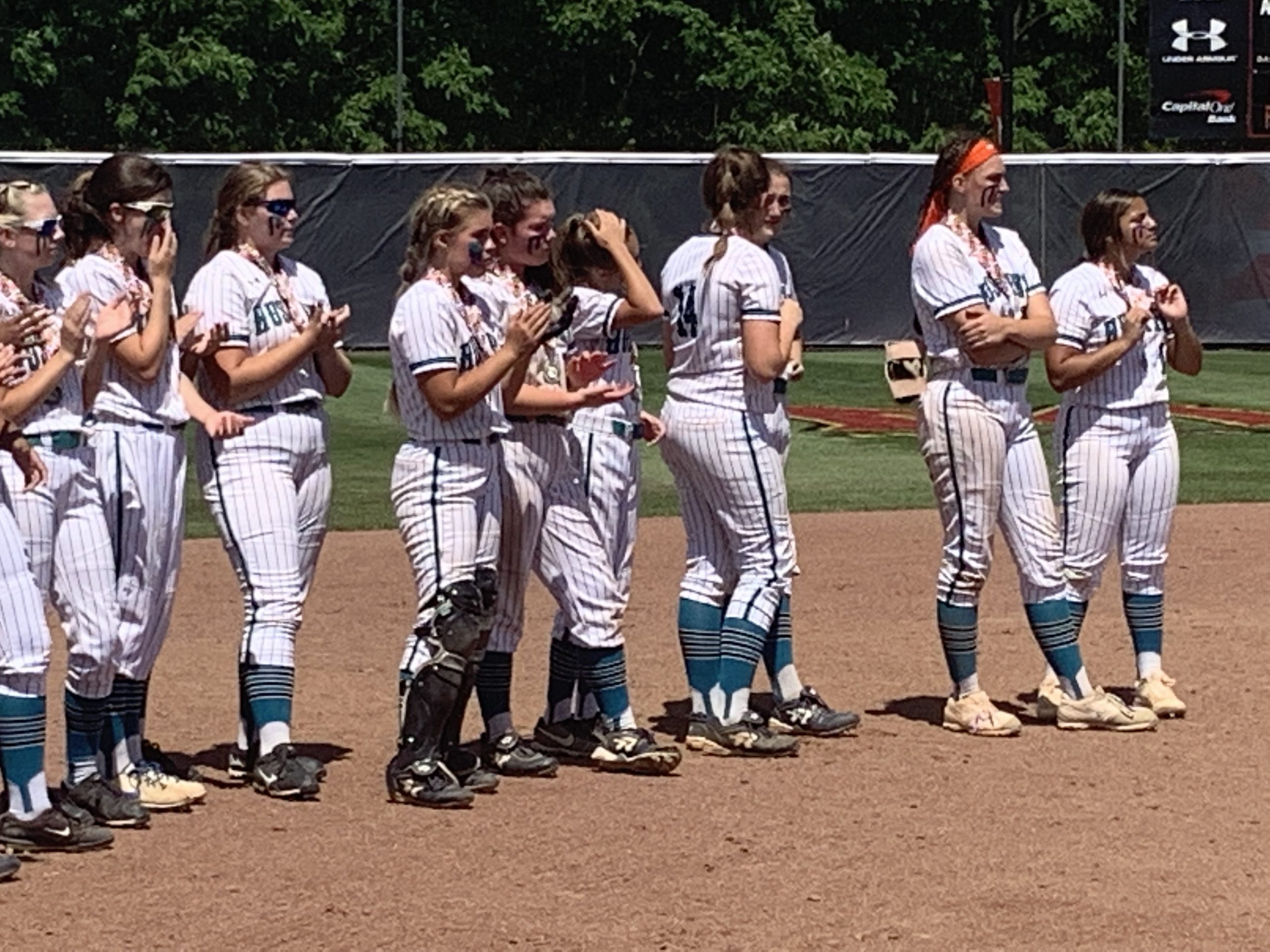 Patterson Mill’s softball players watch as Allegany received its awards during Saturday’s Class 1A state championship postgame ceremony. The top-ranked Huskies attempt at a second straight title and undefeated season was ruined by the Western Maryland school in a 3-2 decision at the University of Maryland.

For the first time in three years, Patterson Mill High softball team walked off the field with a loss.

The top-ranked Huskies’ repeat bid as Class 1A state champs ended in a tough 3-2 decision to undefeated Allegany at the University of Maryland Saturday afternoon.

The Bel Air school entered the bottom of the seventh inning of Saturday’s state final trailing Allegany (18-0) by a run by virtue of a two-run, fifth-inning rally by the Campers.

Laurentius’s short pop-up bunt was gobbled up off of the ground by Allegany catcher Riley Gallagher in time to throw out March at second, but instead, Gallagher, not seeing that March had not even gotten to second base yet after hesitating on the initial pop up, raced to third fearing that March would take two bases on the play.

The rally ended there, however, as Allegany hurler Abi Britton struck out the next two batters, one on an appeal to the field umpire and one on Britton’s nasty change-up that proved to be her out pitch on more than one occasion Saturday.

The loss ended a 44-game winning streak by Patterson Mill, including a victory over Allegany in last year’s 1A state final at Bachman Park.

“All we had to do was put the ball in play, and I thought we would be able to do that, but we weren’t,” said Price, who defensively saved a pair of would-be runs on a diving play at second base and on a relay play to home plate. “The pitcher was good, and she had a change-up that fooled a lot of us. It was really disappointing. We won every game, and it would have been really good to go back-to-back, too.”

The Huskies (21-1) trimmed the lead to 3-2 in the bottom of the sixth as starting pitcher Madison Knight worked a walk from Britton and later scored on a run-scoring groundout by Ali Kirsch. Knight then worked out of some trouble of her own in the top of the seventh through a called strikeout with two runners on and two out.

“You’ve got to play with all the heart you’ve got, and I think we did just that, put everything into it,” said Knight, who racked up nine strikeouts in the loss. “You’ve got to tip your cap to them. I’ve known (Britton) for a really long time. We’ve been friends, so it’s bittersweet. I want her to succeed and I know she wants me to succeed, but coming out like that, it’s not what you want. Still proud of her though. She threw a heck of a game.”

After stranding two Allegany runners in the top of the first, Patterson Mill opened a 1-0 lead in the bottom half of the inning on a trio of walks and a wild pitch that brought home MacKenzie Knight, who worked a free pass to open the inning.

The Campers looked to knot the score in the top of the second on a base hit into the right-center field gap, but a well-executed relay from right fielder March to Price to Izzy Hiebler caught Ava Strother at the plate with time to spare.

Allegany produced that elusive first run in the top of the third on a sacrifice fly off the bat of Britton to right-center field to score Gallagher, who walked, stole second, and reached third on a wild pitch.

The Campers then took the lead for good at 3-1 in the top of the fifth on a sacrifice fly by Skyler Porter and a single to center field by Strother. Madison Knight ended any further damage with a timely strikeout of Mackenzie Monahan to end the inning.

“The way we’ve played over the last couple of seasons, we’ve been resilient; we’ve been battling,” Huskies coach Jeff Horton said. “We’ve been fighting, and we had the opportunity today. We got down, and we got back up. We put ourselves in position with one out and the tying run at third and the winning run at second. All we needed was a ball in play, but we failed to execute. This is a game of execution. Today, the little things just didn’t go our way.”

The last time Patterson Mill lost was a 1-0 decision to eventual state champ Bohemia Manor in the 2019 1A East Region final.

“What a run we had. Obviously, the streak’s over. Everybody can stop talking about it now, thankfully. I couldn’t be more proud as a coach. This team right now has really represented the exact team that I wanted to be represented by: the fight, the heart, the drive, the determination,” said Horton. “I just wish we could have had just a little more, but hey, these are championship games for a reason. I told the girls afterward, the Super Bowl champ doesn’t repeat every year. The college national champs don’t repeat every year. It’s hard to keep winning. We made it here again. We’re thankful for that.”