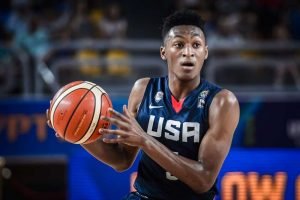 Immanuel Quickley is getting a crash course in point guard play at the FIBA U19 World Cup while playing for the U.S. National Team.

Although he is technically listed as a point guard on the high school level, John Carroll’s Immanuel Quickley, a 5-star basketball recruit who remains uncommitted, has never been required to play the position as it is traditionally described.

That is changing at the 2017 U19 FIBA World Cup in Egypt where Quickley is competing this week as part of an American squad led by Kentucky head coach John Calipari.

A dangerous long-range shooter, with the ability to drive and create acrobatic plays around the basket, Quickley is an elite offensive force on the prep level. Having the basketball in his hands is often the best way to given him an opportunity to create. As he prepares for a college career, which is about 15 months away, and a potential professional career beyond that, he will need to lock down the finer points of point guard position.

In four games thus far, all wins for the Americans, Quickley has averaged 6.5 points, 1.5 rebounds and 2.5 assists per game, in a little less than 18 minutes per contest. His best offensive effort was 12 points against Angola and he had a tournament-high six assists in a win over Italy.

“Individually I was trying to get everybody involved as a point guard, getting PJ (Washington) the ball, Hami (Hamidou Diallo), Cam (Cameron Reddish), all those guys,” said Quickley following the Italy game. “Just being the best point guard I can.”

Quickley is being challenged by Calipari, who is also recruiting him for Kentucky. Providing equal past tough love and encouragement, Calipari is pushing Quickley in a effort to reveal his potential at the point guard position.

The famed Kentucky coach was spotted at a couple of John Carroll games last winter and has already made his in-home visit to Quickley. Having him every day in a team setting for the U19 World Championships, however, not only gives Calipari an opportunity to build a bond, but also an early opportunity to mold Quickley as a player. It also could turn out to be a decisive advantage in luring Quickley to Lexington over his other three final choices, Maryland, Kansas and Miami.

Quickley and his American teammates will take on Germany in a quarterfinal round game, Thursday evening in Cairo, as the team progresses towards what it hopes will be an appearance in the finals on Saturday.