2022 Softball Players and Coach of the Year 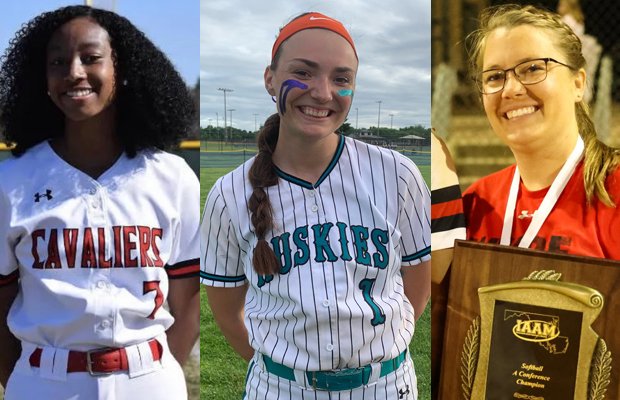 Spalding’s Carroll repeats as Player of the Year; Patterson Mill’s Knight is tops in the circle; and Spalding’s Bell is the top coach

Another banner softball in the Baltimore Metro area is in the books and that means it is time for VSN’s Softball Players and Coach of the Awards.

Repeating as VSN Softball Player of the Year is Archbishop Spalding’s Amaya Carroll, who along with 2022 VSN Softball Coach of the Year Delaney Bell, led the Cavaliers to the IAAM A Conference Championship.

In the circle, Patterson Mill’s Madison Knight, who led the Huskies to the area’s No. 1 ranking for a second straight year and to a second straight Class 1A state championship game, is the 2022 VSN Softball Pitcher of the Year

Here are their stories: 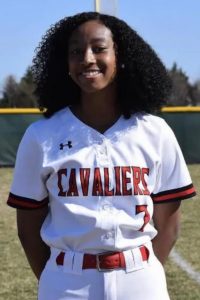 2022 VSN SOFTBALL
PLAYER OF THE YEAR

While the UMBC commit’s .424 batting average was lower than last year’s .528 mark, her four homers and 23 RBIs this year compare favorably to last year’s output.

It’s the pitching numbers that really show the significant jump Carroll has made from last year to now.

Carroll’s improved velocity was the result of some serious off-season weight lifting sessions.

“After I got the speed up, I then worked back on the spins — and not just winging the ball in there,” Carroll said about her five-pitch repertoire of fastball, change, riser, curve and screwball.

Her gem of the 2022 campaign, Carroll said, came in a 2-0 verdict over Austintown Fitch High School (23-3, 8-0 league) from Youngstown, Ohio in a tournament tussle in Myrtle Beach, S.C. in April.

Not only did she belt a home run against the Falcons’ freshman phenom pitcher Sydnie Watts to give the Cavaliers (18-3, 8-0) an early lead, the Cavs’ right-hander also fanned nine and didn’t issue a free pass in the sparkling complete-game two-hitter against the Ohio Division I regional finalist.

That game came right after the Cavaliers’ low-point of the season when they lost back-to-back games against Anne Arundel County public schools Chesapeake and Arundel.

Getting off to a good start in that tournament was critical — and Carroll, as usual, was up to the task of making that happen.

After all, because Spalding was ranked No. 1 in the VSN Preseason Top 20 Softball rankings and favored to win its third straight IAAM A Conference crown, expectations were once again through the roof for the Cavs.

“We had a lot of pressure on us,” said Carroll, who will pursue a chemical engineering degree at UMBC while also playing softball for the Retrievers. “We were trying to uphold our No. 1 status. When we lost those games, our coach (VSN Coach of the Year Delaney Bell) told us that we still have a lot to play for, so we pushed through and didn’t succumb to the pressure.”

Spalding made shambles of its conference schedule,walloping rivals by an average of more than 11 runs per game.

In a 13-2 triumph over John Carroll in the championship game, Carroll doubled and, more importantly from the circle, scattered four hits, yielded three walks and struck out 13 Patriots to lock up the title.

“Amaya is the epitome of a leader by example,” Bell said. “All the players respect her so much. I’ve coached her since she was eight, and it was really cool to end it this way. She’s good and she knows she’s good — but in an endearing way. You just can’t dislike her.” 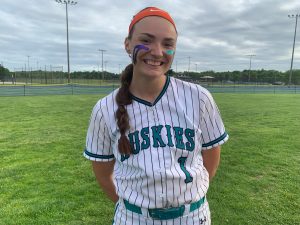 2022 VSN SOFTBALL
PITCHER OF THE YEAR

High school softball players are rarely mature enough to handle defeat in the manner in which Madison Knight did when Patterson Mill, sitting at No. 1 in VSN’s final softball Top 20 rankings, had its 44-game winning streak snapped by Allegany in the Class 1A state championship game last month.

Whining and moaning about bad breaks in the 3-2 setback didn’t enter the mind of the 2022 VSN Softball Pitcher of the Year.

The senior right-hander, who suffered her only loss after earning 21 straight victories this spring, gave credit to the other team — and to her teammates for their spirited play in the defeat.

“It was a tough loss, but we lost to a really good pitcher,” she said about Allegany sophomore pitcher Abi Britton, a product of the same Tincher Pitching style that has helped develop Knight’s excellent work in the circle. “Our team fought to the very end — and we still got a (runner-up) medal. I was frustrated in the moment, but I couldn’t show that to my teammates. I was more upset that it was the last game I would play with my sister (freshman CF Mackenzie Knight).

“I didn’t have my best stuff that game,” she continued. “But you can’t have your best stuff every time. They had some pretty good hitters and I gave everything I had.”

Despite the loss, the standout nicknamed “Mayday” leaves the program as the antithesis of a loser, considering that she claimed her second consecutive Maryland Gatorade Player of the Year award after another banner season in which she went 21-1 with a 0.32 ERA while allowing just nine earned runs in those 22 starts.

In addition, she struck out 296 rivals batters in 133 innings, yielded just 34 walks and held opponents to a paltry .117 batting average this spring.

Moreover, Knight struck out only once the entire season.

The Syracuse University commit said that her two favorite games this season were a 21-strikeout performance against North East and walk-off round-tripper in a win over Rising Sun.

With Mackenzie on third base and one out, “Mayday” sent the ball sailing over the center-field fence to top Rising Sun before also going deep against Chesapeake Math & IT Academy North in a playoff quarterfinal.

“It was awesome,” she said.

Knight also shutout Fallston, 3-0, before the Chesapeake game and stopped Boonsboro on a four-hitter in a 9-1 triumph in a state semifinal.

She was, as Patterson Mill coach Jeff Horton readily admits, a “once-in-a-generation” player, who “took a rising program and catapulted it into an elite program.”

Horton, who just finished his eighth year at the helm, extolled the virtues of Knight’s superior leadership skills that included taking a teammate aside for an impromptu — and fiery — pep talk during the heat of the battle.

“She provided complementary support on the field that any coach could want for their program,” he said. “Just because you’re a good player, that doesn’t automatically make you a good teammate or captain — but she’s both of those things. It’s really hard to find a girl who checks all the boxes like she did.” 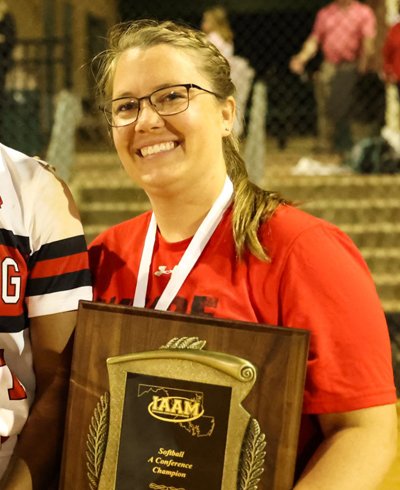 2022 VSN SOFTBALL
COACH OF THE YEAR

The faith Archbishop Spalding coach Delaney Bell had in her team after a two-game slide against Anne Arundel County public schools rivals Chesapeake and Arundel never wavered, even though the setbacks knocked the Cavaliers from the unbeaten ranks and could have rocked their confidence for the rest of the season.

Instead, under Bell’s steady hand, Spalding regrouped immediately on a trip to Myrtle Beach, S.C. for the Grand Strand Classic tournament in April, including a battle against Youngstown, Ohio’s unbeaten Austintown Fitch High School (23-3, 8-0 league).

When the Cavaliers prevailed, 2-0, in that game against the Falcons’ freshman phenom pitcher Sydnie Watts, the season seemed to return to an upward trajectory.

“When we lost those games, our coach told us that we still have a lot to play for, so we pushed through and didn’t succumb to the pressure,” 2021 and 2022 VSN Softball Player of the Year Amaya Carroll said about Bell.

Bell, the VSN Softball Coach of the Year, sagely used the mini-losing streak to her advantage.

“We had a lot of pressure in the beginning of the season,” she said. “Being No. 1 (in the VSN Preseason Top 20), everyone was gunning for us. It was almost good that they had kind of had a grounding moment, a good humbling moment.

“I told them that you can feel (the losses) tonight, but tomorrow you’re going to be playing one of the best teams in Ohio and you have to let it go. We knew that (Austintown Fitch) would be good and that their pitcher would be throwing 67-68 (mph), but we took it as a challenge.”

After going 3-1 in that tournament, the Cavaliers (18-3) were ready to return to the business of winning games back in the Free State.

They rattled off six straight wins while outscoring their opponents, 81-6, including a 13-2 win over John Carroll in the IAAM A Conference title game to claim their third straight championship under Bell — matching the trio of trophies she helped the Cavaliers hoist when she played for Spalding.

Bell said that she is a stickler for getting things right in practice while taking a lighter approach during games by allowing players to play the game without fear of being upbraided publicly for making a mistake.

“We make minor adjustments during games,” she said. “But you’ll never hear us yelling out to players on the field about what they should be doing.”

“She definitely makes sure that you’re working hard all the time, without putting a lot of pressure on us,” she said. “As a young coach, she connects with us. But she also knows what the players’ limits are.”

“She has been my coach for almost 10 years,” Carroll added. “She has taught me so much as a player and as a person. She believed in my abilities even as a young girl and gave me a foundation to build on, which helped me be the player I am today.”