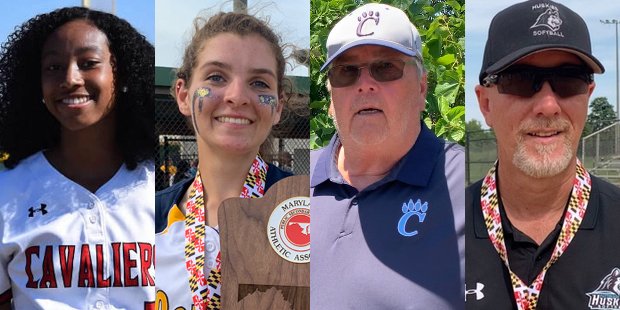 Spalding’s Carroll is top player and Catonsville’s Sisolak is Pitcher of the Year; Ellenberger from Chesapeake-Anne Arundel and Patterson Mill’s Horton share Coach of the Year honor

2021 VSN SOFTBALL
PLAYER OF THE YEAR 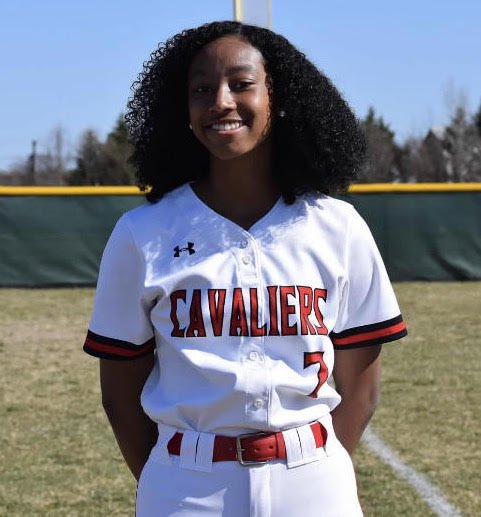 Amaya Carroll was again at the center of another championship season for the Cavaliers. The junior is VSN’s 2021 Softball Player of the Year.

Carroll allowed four hits and struck out 12 in the title match (pitched a no-hitter in second regular season meeting but lost, 1-0), avenging three Spalding losses to McDonogh in a truncated 2021 schedule because of the COVID-19 pandemic. She went 8-2 with 114 strikeouts and a 1.65 earned run average.

Carroll was dominant at the plate, leading the Cavaliers with a .528 average along with three home runs and scored 20 runs. She belted a homer and struck out 14 in Spalding’s semifinal victory over John Carroll School.

As a freshman in 2019, Carroll got the call in the circle for the IAAM A final. She responded, scattering six hits and striking out four as the Cavaliers defeated John Carroll for the crown.

Carroll had a nagging injury for most of the spring, but the UMBC commit answered in the postseason.

“She killed it this year. She had a little rough start…then after that, she worked her butt off and she is where she is,” said Spalding coach Delaney Bell. “She deserves this.”

2021 VSN SOFTBALL
PITCHER OF THE YEAR

Sammi Sisolak authored a historic spring for the Baltimore County school. The senior is VSN’s 2021 Softball Pitcher of the Year.

Catonsville won its first state championship, defeating North County in the Class 4A state final at Bachman Park last month. It capped a memorable postseason for Sisolak, who didn’t allow a run in the Comets’ three state tourney matches.

Sisolak was the epitome of clutch in the title game. With Catonsville nursing a 1-0 lead in the seventh inning, North County had the potential tying and winning runs in scoring position with one out.

After snagging a bunt attempt and throwing home for the second out, Sisolak fanned the next batter – her 14th of the game – for the championship. She only allowed onea hit against the previously undefeated Knights.

Sisolak finished 9-1 on the spring with a 1.11 ERA and 114 strikeouts. She had 45 strikeouts in the postseason while shutting out Montgomery County’s Northwest (state quarterfinals), Walter Johnson (semifinals) and North County, which defeated 4A powerhouse Sherwood from Montgomery County in the state semifinals and 3A state champion Chesapeake-AA during the regular season.

2021 VSN SOFTBALL
CO-COACH OF THE YEAR

Don Ellenberger made his final run in Pasadena memorable. The recently retired Ellenberger is VSN’s 2021 Softball Co-Coach of the Year.

Chesapeake won the Class 3A state championship, defeating Reservoir at Bachman Park last month. It was the first title for the Anne Arundel County school since 2008.

“Obviously you love winning. I’m more happy for my players because they are the ones who really do it,” said Ellenberger. “It’s been a while since we had a (championship) win and the girls pulled it off.”

The Cougars rallied past Bel Air in the state quarterfinals. They fell behind 3-0 early at traditional Southern Maryland power Northern of Calvert before sophomore catcher Sam Larkin’s 3-run homer in the seventh gave Chesapeake a 6-4 victory.

The Cougars only loss came against eventual 4A state finalist North County. Chesapeake reached the 3A state final in 2019, but the 2020 season was canceled due to the Covid-19 pandemic.

Ellenberger, who had talked privately about retiring the past couple of seasons, decided 2021 would be it. He waited until after the post-season to make the announcement.

“I didn’t want everyone focused on me,” said Ellenberger. “I wanted the focus to remain on them, not me.”

Ellenberger, a Pasadena resident who was VSN’s Coach of the Year in 2012, plans to move to the Eastern Shore with his wife after his retirement from his job with the federal government.

2021 VSN SOFTBALL
CO-COACH OF THE YEAR 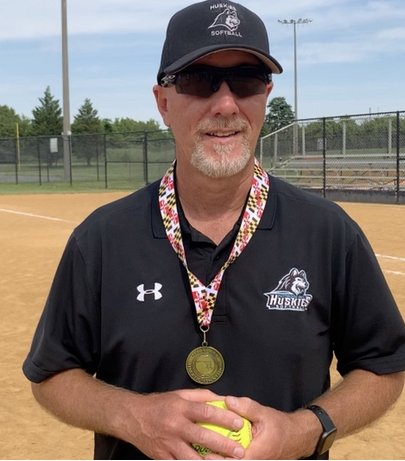 In a season like no other, Jeff Horton and the Huskies had a spring for the ages. The sixth-year coach is VSN’s 2021 Softball Co-Coach of the Year.

The Harford County school won its first state championship, taking the Class 1A championship (defeating Allegany in the championship game at Bachman Park last month). Patterson Mill was the area’s lone undefeated team in the spring at 21-0.

“We really worked for a long time to get out of the lower division,” said Horton, whose team was in the UCBAC Susquehanna Division when he started as Huskies coach in 2015.

There was no 2020 season because of the COVID-19 pandemic.

“It was a trying time because we had players really working towards that championship last year and it would’ve been nice to see what we would’ve gotten,” said Horton. “We have a lot of players that have been in the program who’ve started to learn, started to build and feed off each other and understand how we want to play softball a certain way…we develop a mindset where it’s fun to win.”

Horton said the players remained focus through COVID-19 protocols that altered practices. He also commended his seniors, who made several trips back from Senior Week in Ocean City, to play in its post-season run.

“We had previous coaches, previous players and their parents in the stands,” said Horton after the state final. “The support we had all year long was immeasurable.”

Horton is 75-31 in six seasons at Patterson Mill.