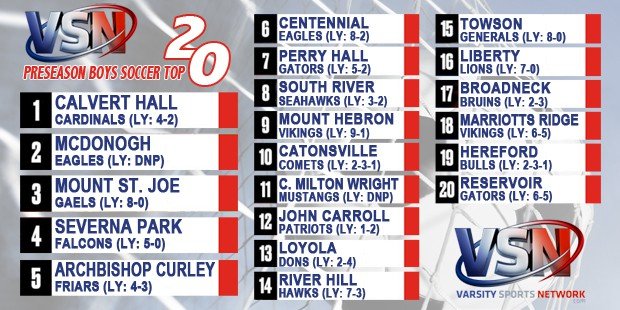 Nationally-ranked Calvert Hall and McDonogh lead the way; players to watch for all ranked teams

by Nelson Coffin
After limited fall schedules (or in the spring of 2021 in some cases) in 2020, fall high school sports are back in full force and with their return comes the return of VSN’s Top 20 polls. Admittedly much is unknown, with so many key players having seen little or no high school action in the last 20 months, but we’ve done our homework and have a starting point.
No doubt things will shift along the way, as the real identities of so many teams are revealed, but our initial Top 5 is filled by many traditional area boys soccer powers with nationally ranked Calvert Hall College and McDonogh School leading the way. Mount St. Joseph, which has also gained some mention in national polls, Severna Park and Archbishop Curley fill out the first five.
Below is the complete VSN Boys Soccer Preseason Top 20, as well as some key facts about each: